Kara has been infected by poison created by The Batman Who Laughs, but rather than fall in with his gang of giggling geeks, she goes it alone. This sniggering Supergirl actually wants to help people.

She’s approaching the acts of attempted heroism from a position of superiority, but is certainly not out to hurt the innocent – this is a Bizarro Supergirl without the entertaining backwards logic.

A danger to the public, she would soon attract the attention of other heroes but as it happens, Superman and Batman are smack bang in the middle of the Batman Who Laughs’ convoluted crimes, so quick to arrive in National City.

Superman, who has had dozens of encounters with possessed metahumans, and almost always pierced to the heart of the hero with his compassion, tries the reasonable approach with his confused cousin.

Well, that went well. Batman, of course, likes to save time by immediately thinking the worst of people. 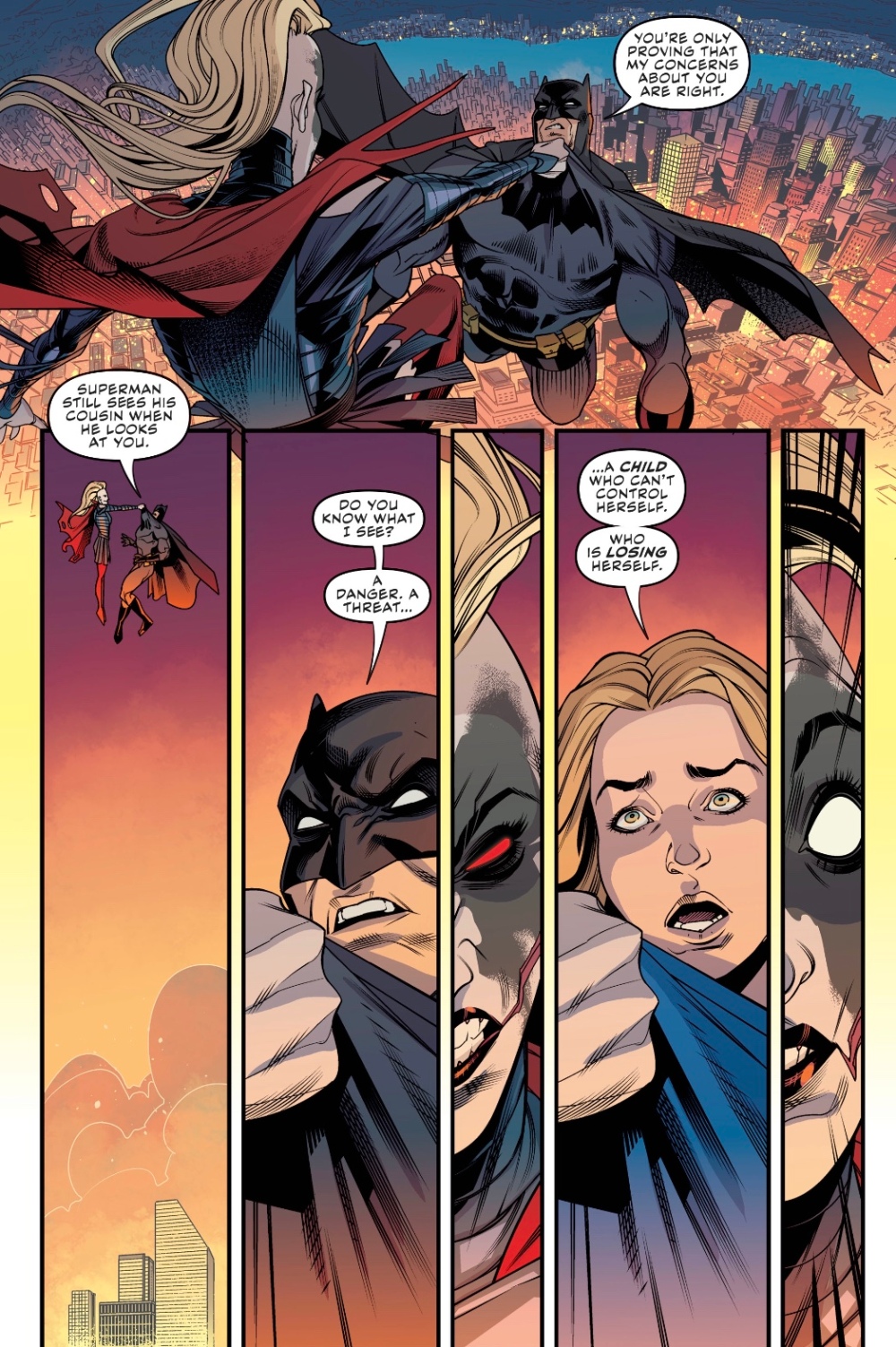 And weirdly, it’s Batman who gets through to the true Supergirl, just for a moment. Then Krazy Kara escapes, but the encounter leaves Superman convinced they can bring his cousin back.

After a super-sized panic attack of sorts, our heroine is drawn to old haunts – and a familiar face.

Aw, for a second there, as the sonic sound effects arrived, I thought we were going to get a surprise appearance by Supergirl’s old pal Silver Banshee, but no such luck. Still, this issue was one big surprise – I really enjoyed it. Who knew that a comic crossing over with a storyline starring the execrable Batman Who Laughs could bring a darn good Supergirl story, in script and art?

Is it a coincidence that this issue sees the debut of the book’s new creative team? Probably not. Jody Houser – who co-wrote this series for a while with Steve Orlando – is back, as solo scribe, and she emphasises that Kara isn’t easily controlled. Superman has his Kryptonian physiology theory but I choose to believe Supergirl is simply too strong a character to instantly become the laughing lackey of a poor man’s Judge Death. Core Kara is the backseat driver who’s steering the infected Supergirl towards heroism, who’s tossing Batman and Superman aside rather than truly hurting them. And I bet that sooner or later, Kara Zor-El will fully assert herself. I’d be truly disappointed were a Kandorian cure-all or whatever to bring Supergirl back – she should be the heroine of her own story.

And I’m delighted that Houser touches on Kara Danvers’ business, with the appearance of her almost-beau Ben Rubel, who maintained a DC Universe presence while sidelined from this series due to Kara’s (over)long space quest by becoming a semi-Titan. I’m looking forward to seeing where Houser takes their friendship next.

And will you look at that artwork? New illustrator Rachael Stott injects huge energy into the visuals, with a cracking Kara, even if it’s not the version I love. Infected Supergirl zooms around the pages, moving from panel to panel creating chaos while breaking my heart just a little bit. The use of jagged and stacked borders helps sell the crazy chaos. Plus, she conjures up a wonderful World’s Finest team, and Ben Rubel has never looked so good. There’s a visionary use of angles to increase the drama and a sense of weight to the heroes.

Kudos, too, to colourist Cris Peter, for her pleasing palette, encompassing pastels and neons and atmospheric dark tones.

This page shows just how well Stott and Peter work together from the off – there’s a real sense of dark power, and the representation of exploding Krypton via clouds is very smart.

And letterer Tom Napolitano makes bad Kara’s word balloons suitably intense. Add in a cover by fan fave Bengal and we have the most impressive issue in quite awhile.

So well done to the whole creative team, especially new core creators Jody Houser and Rachael Stott – I really hope they stick around for a year or two and bring a new, consistent creative synergy to the adventures of Supergirl.