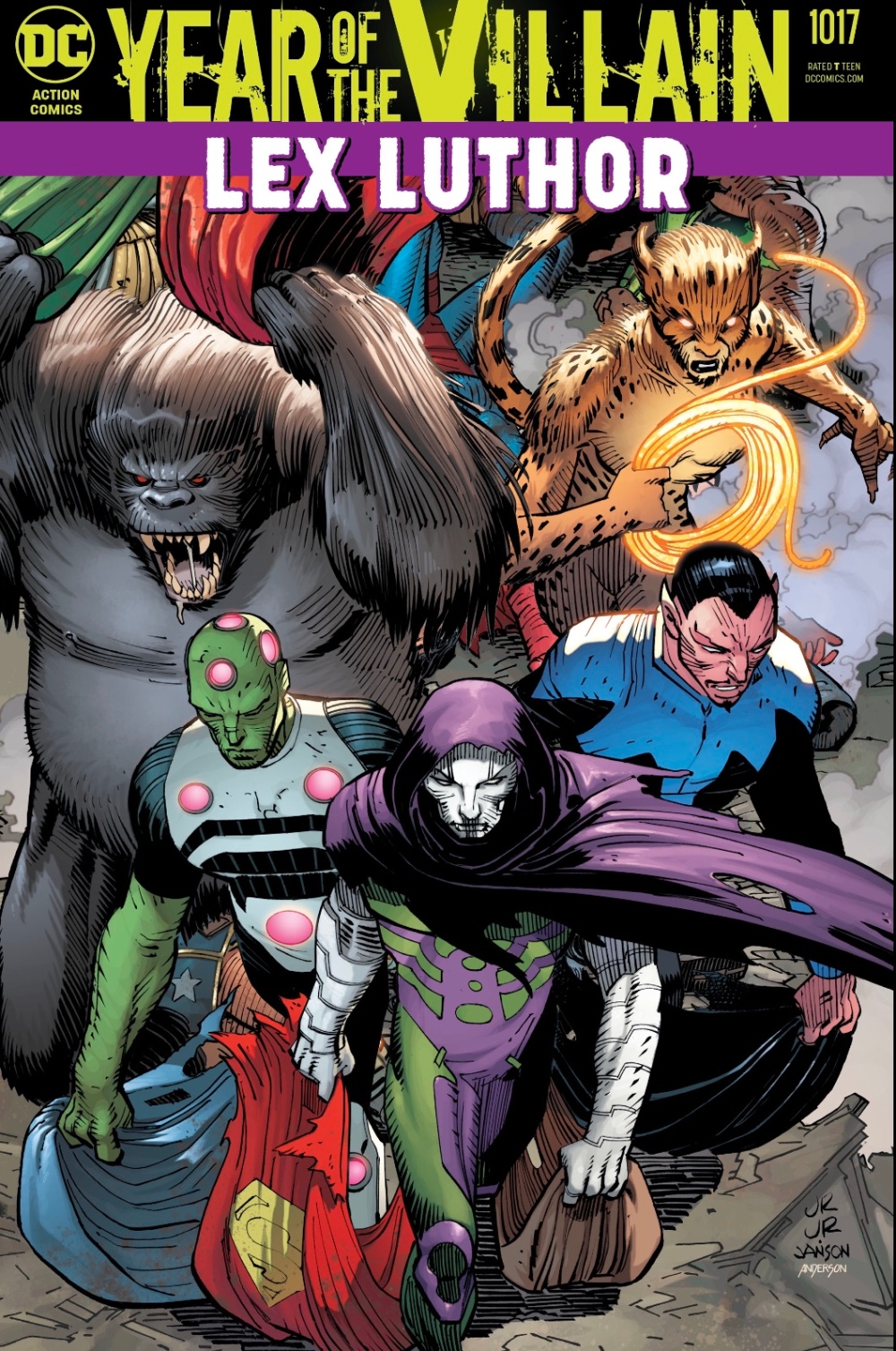 It’s the Year of the Villain and Metropolis is being razed by Lex Luthor and his Legion of Doom. The Justice League and their allies are being crushed by the forces of Doom. But how did we get to this place of Doom?

Flashback one day, and Clark Kent is interviewing Marisol Leone, who has gone public as the owner of the Daily Planet – she had intended to stay in the shadows, but attacks on the Invisible Mafia she heads have changed her mind. She’s taking a risk, talking to one of the world’s top investigative journalists. Is she Doomed? (That’s enough Doom – Ed) 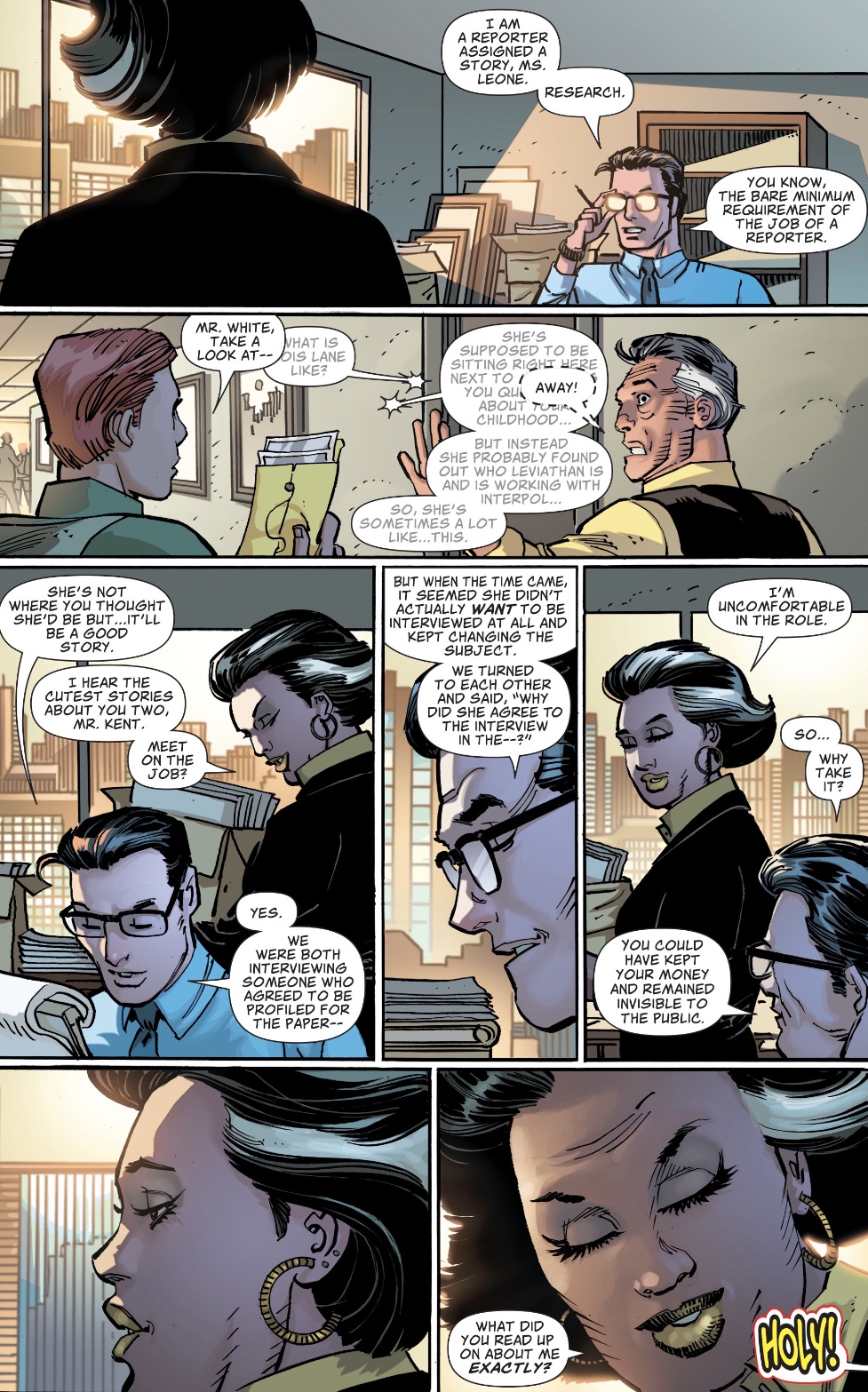 The interview comes to a sudden pause due to a disturbance in the streets outside. Clark, having changed to Superman, pursues the (human?) comet, but another energy flare, the familiar signature of Leviathan’s transportation technology, sends Superman across the world.

Superman escapes Gorilla City and sneaks back into the Daily Planet, his earlier perky mood gone. When news comes of an explosion across the city, at the Invisible Mafia’s club, Superman goes into action again. 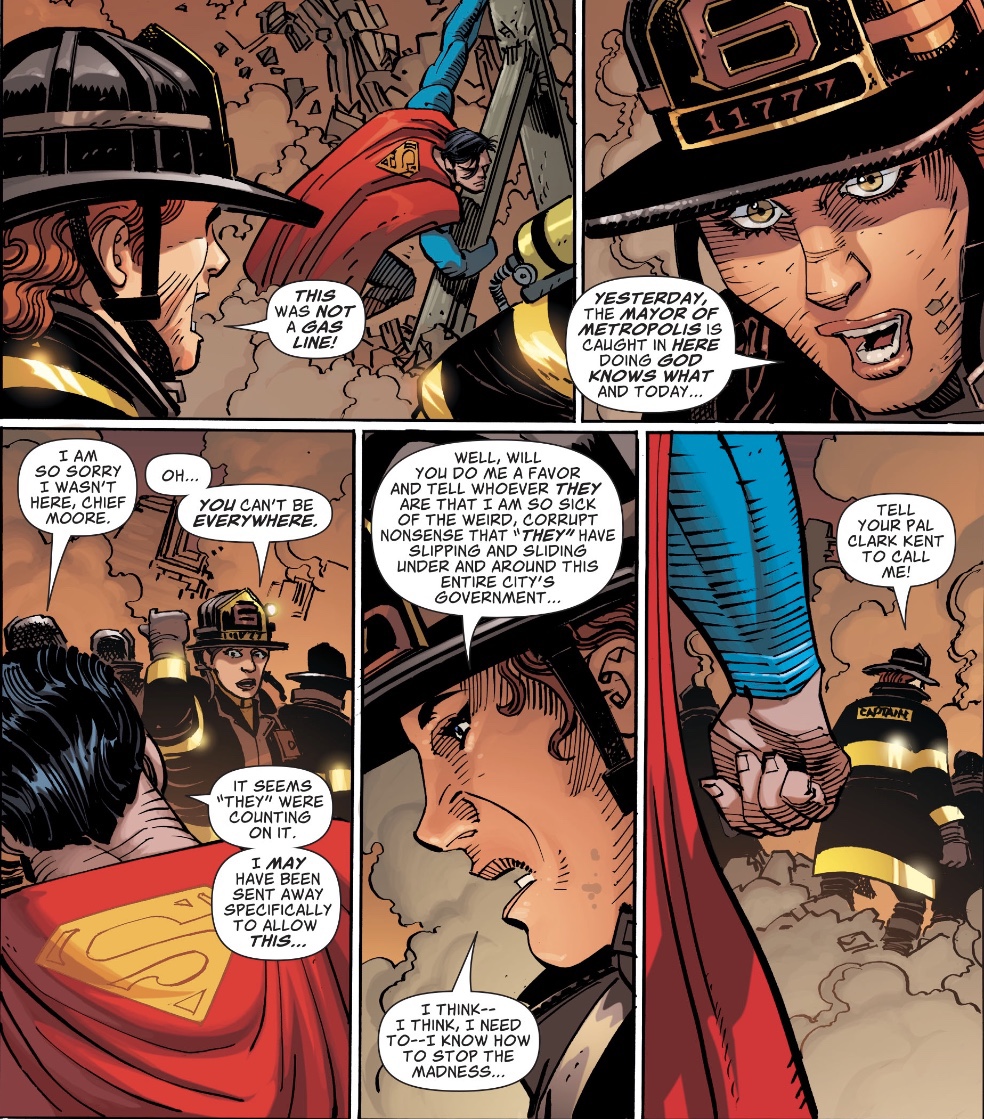 A discussion with Lois, who’s been working away from the office, leads to the conclusion that Superman was deliberately transported to Africa so the attack on the hoods’ hangout could take place. And the name in the frame? Luthor… which cues up a view of the big hero battle against Lex and his gang of arch foes including, of course, Gorilla City’s ruler, Gorilla Grodd. End chapter.

There’s a lot to love about this issue: Clark and Ms Leone circling one another; the way the Planet staff’s banter moves the story along; the forensic dissection of ongoing events by Mr and Mrs Superman.

And then there’s the Year of the Villain stuff. Oh Lordy, if only it were ‘just’ a year. Writer Brian Michael Bendis has a terrific serial in motion here and suddenly it’s derailed by the apparently neverending Legion of Doom nonsense from the current Justice League series… seriously, it’s been at least 37 issues of Lex and Perpetua, Dark Metal and Monitors, Martian kids and Turtle toddlers. If we must have such an extended, all-over-the-shop arc, DC, at least keep it in the one book. But no, the convoluted conflict is all over the superhero line, its woolly timeline fogging up creative teams’ best efforts to tell their own stories. It’s 18 months since we were told Source Wall shenanigans were unpeeling reality itself and while, of course, comics aren’t aligned to our Wednesday Warriors schedule, it has to have been weeks in the DC Universe, yet daily life goes on. God bless Bendis for at least keeping the ‘Doom War’ to bookends, so we can relax into the meat of the issue, the stuff I’m buying this comic for – action featuring Superman and Clark Kent; Bendis has cleverly given Action Comics a unique superhero noir tone, and cosmic conflicts don’t fit it. His Superman series, where it’s all about the big stakes, would be a better place for this modern Challenge of the Super Friends.

As it is, the Robinson Goode plotline is sidelined, so there are no more revelations about her other life as Red Cloud. And the Leviathan storyline is being stirred into the Year of the Villain sauce.

The absence of Goode, though, does lead to a great bit of Perry business, and I’m glad to see more of gossip queen turned city room star Trish Q, who looks to have some chemistry with Jimmy Olsen. 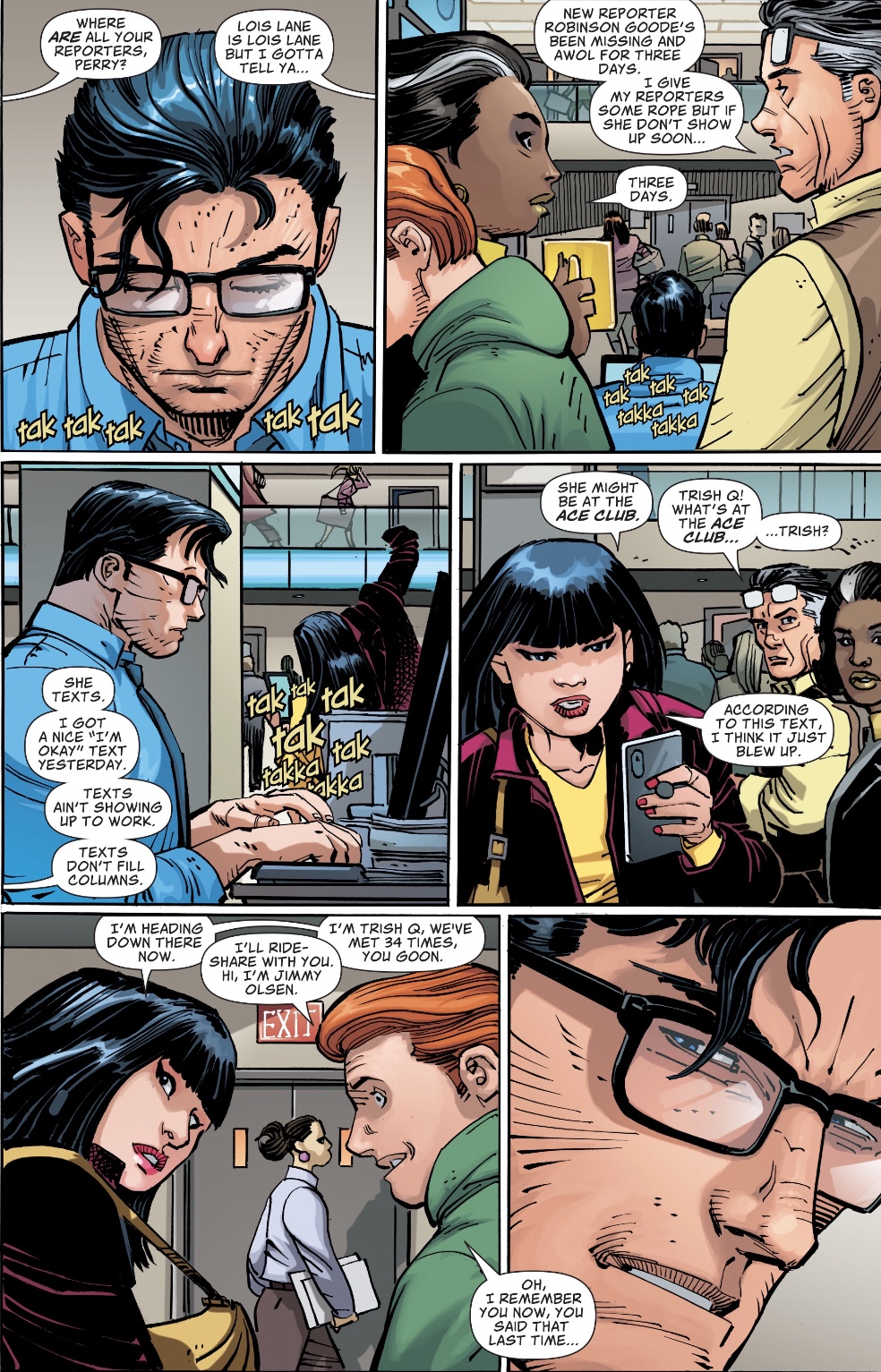 Speaking of Trish, take a look at her now… is this the first time we’ve seen her sans glasses? Should specs actually be able to disguise the fact she’s apparently Asian-American? Because that’s new to me.

I’m glad to see new Metropolis fire chief Melody Moore again, but I suspect she’s not long for this world. I hope I’m wrong, I like her brand of integrity, and awkwardness around Superman.

John Romita Jr, one of Bendis’ old Marvel sparring partners, jumps on board for a few issues, along with longtime inking partner Klaus Janson, while regular Action colourist Brad Anderson remains in post. The Planet scenes are excellent, there’s a pleasing busy-ness to them, and the arrival in Gorilla City, with ape soldiers climbing down vines, is a treat. But I just don’t like Romita’s Superman, there’s little consistency from panel to panel, it’s different kinds of ugly. The art actually deteriorates visibly towards the end of the issue. 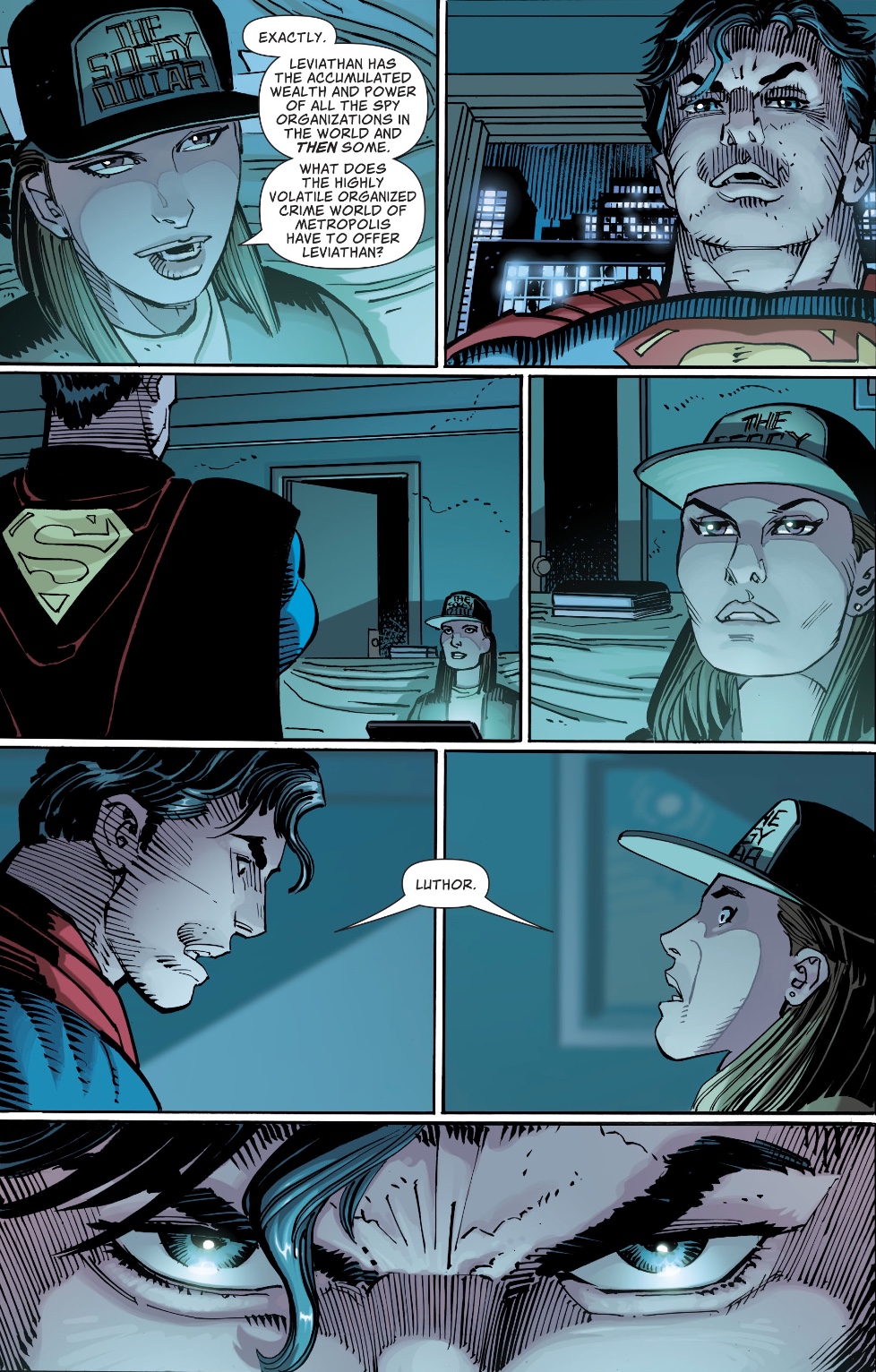 I can only assume this issue was very rushed, because Romita can certainly do better, and Janson is a master. 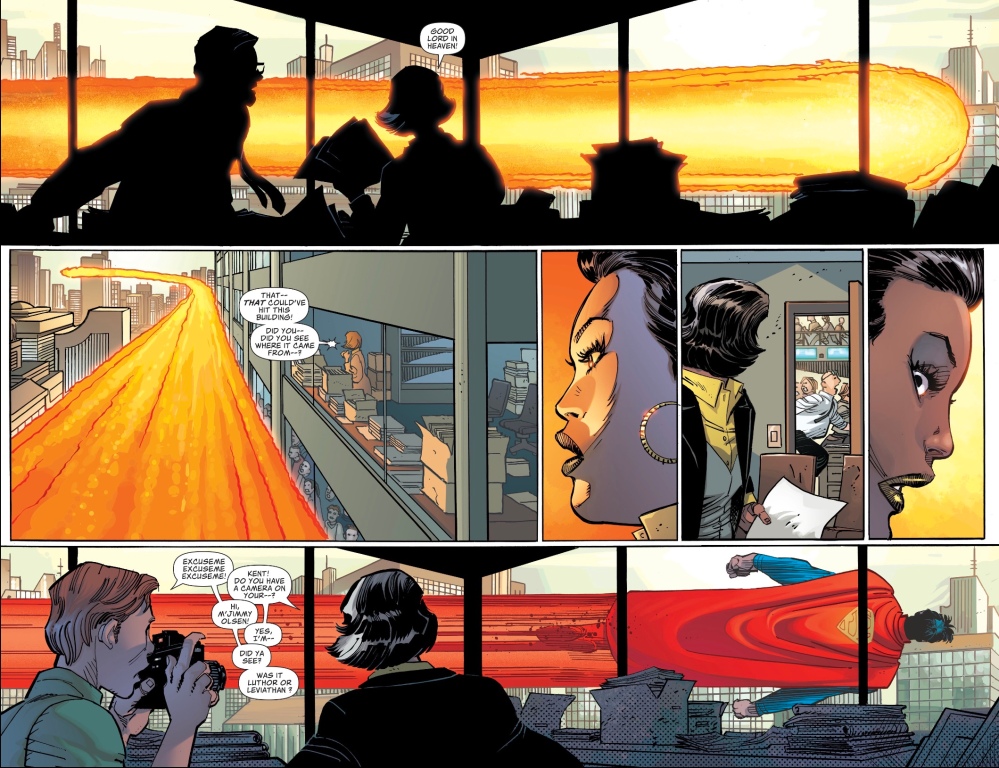 Take the mystery comet spread, for example – Romita’s composition is top notch, it’s stylishly embellished by Janson, and Anderson’s colour choices are outstanding… the whole thing pops. The weakness of some pages is probably due to having to tie in with the Year of the Villain (Year of the Villain makes everything worse). Lettering the book is Dave Sharpe, whose fonts always look good.

Next issue, the Doom War continues. Let’s hope Bendis finds a way to send it straight into the panel gutters.