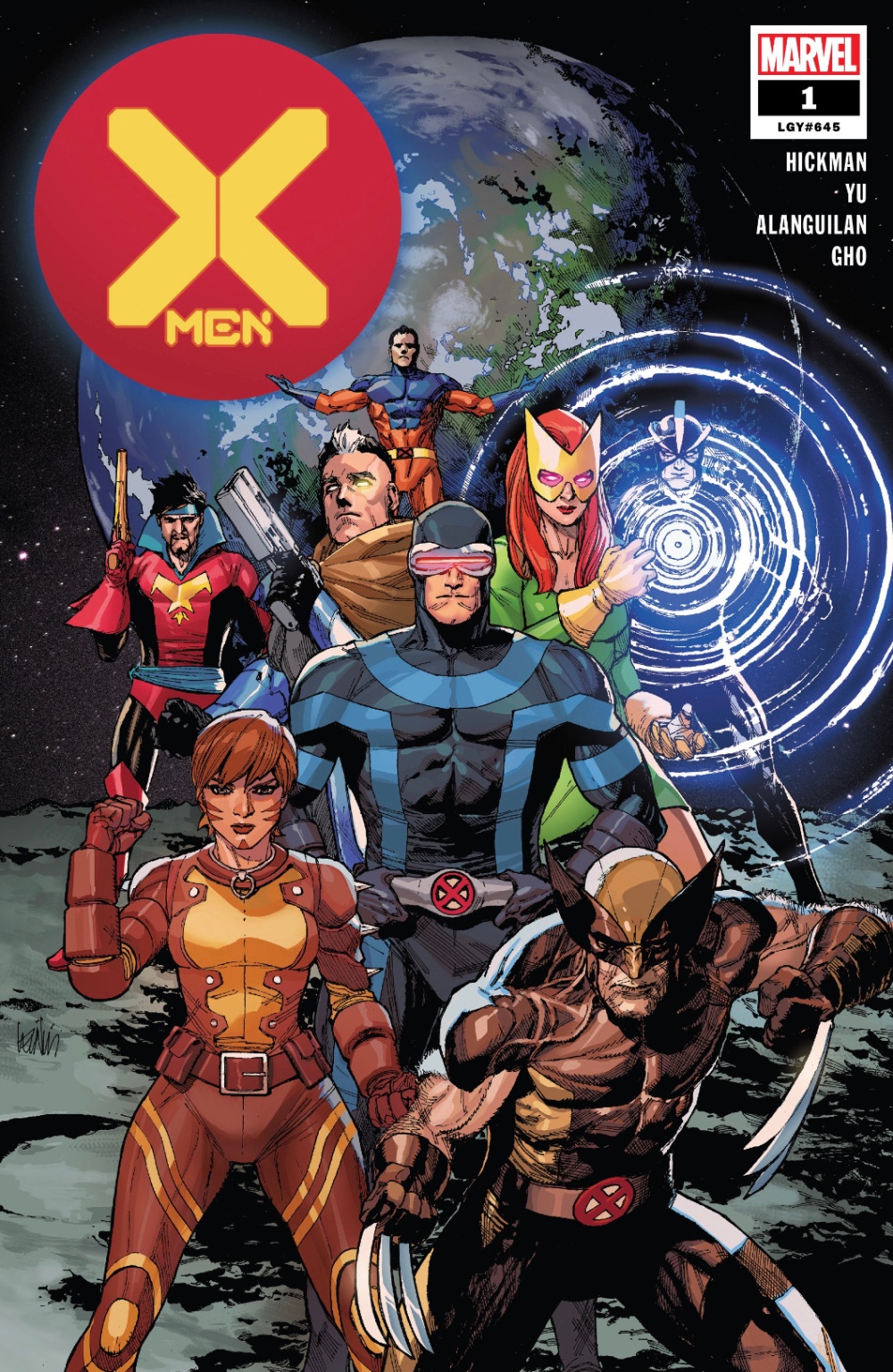 Cyclops. Storm. Nightcrawler. Wolverine. Colossus. Children of the atom, students of Charles Xavier. MUTANTS – feared and hated by the world they have sworn to protect. They are the strangest heroes of all.

So ran the legend that opened Marvel’s Uncanny X-Men back in the glory days of Claremont, Cockrum and Byrne. It’s time to rewrite that…

Cyclops. Storm. Nightcrawler. Wolverine. Colossus. Children of the atom, students of Charles Xavier. MUTANTS – causing the world they had sworn to protect to hate and fear them. They are the strangest villains of all.

Has anyone come out of House of X/Powers of X feeling that Marvel’s once merry mutants are worth rooting for? Yes, their attempts to live peacefully alongside baseline humans have failed again and again, but sharing cures for the likes of cancer only on condition their cultish new ‘paradise ’ of Krakoa is recognised as a nation? Professor Xavier and Forge copying the minds of every mutant on the planet without permission to enable new bodies to be made if a slain mutant is deemed useful enough to be brought back from the dead?

The first issue of Jonathan Hickman’s ongoing X-Men series sees Cyclops, Storm, Magneto and Polaris apparently murder an entire squadron of ordinary humans. Yes, the dead guys are with the Orchis group out to put down mutants, but the supposed good guys could just put them out of commission, the way they did for decades. Instead, their assault on Orchis HQ is followed by a mass space burial.

Sure, this could be leader Devo lying to former X-Man Karima Shapandar, but she seems far too sharp to be taken in; this is the real deal… oppose the new ideology of Professor X, Magneto and Moira Kinross, and you’re quite possibly dead meat.

The attack on Orchis leads to the rescue of mutant kids who have been kept in pods by Orchis for some nefarious purpose. One of them is a wee bundle of mystery, apparently not a mutant at all. 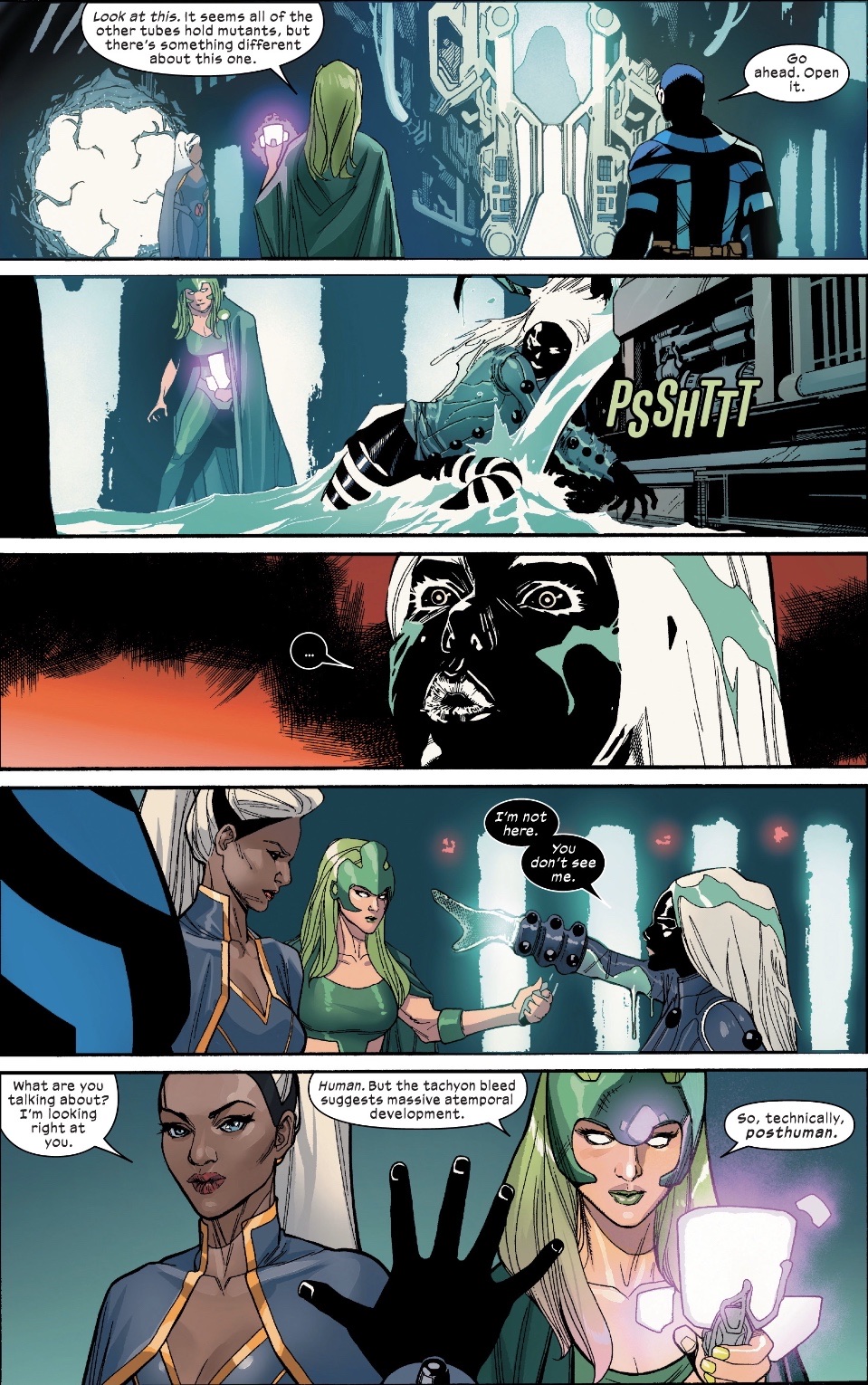 The freed mutants are taken back to Krakoa, where Magneto is feted. 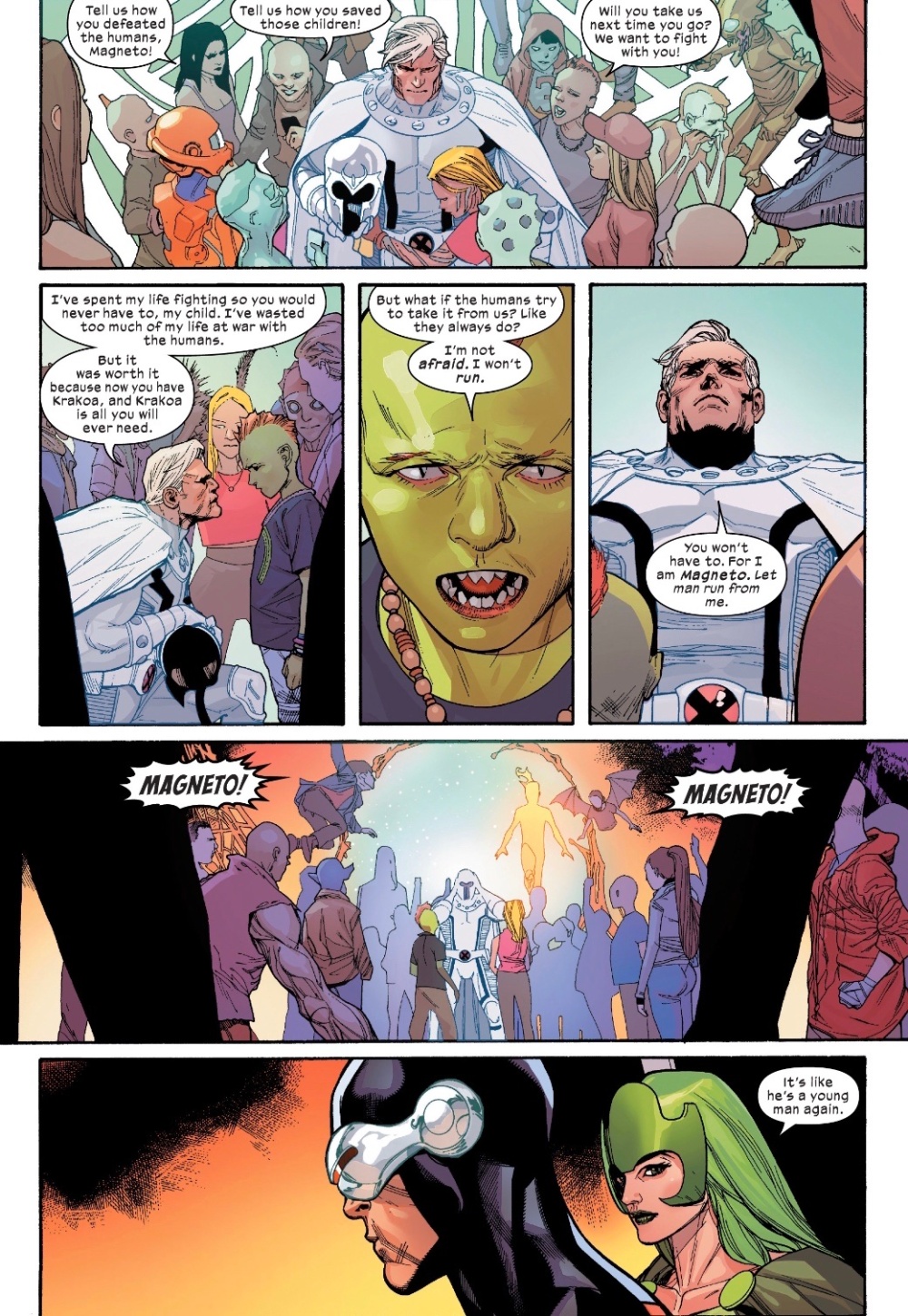 One of the notable perspectives absent from HoX/PoX was any X-Men members or allies questioning the notion that the best way forward is to hide away from the rest of the world, on a living island which once wanted the X-Men dead, where you have to speak a brand new language – Xperanto, presumably – and bow before longtime supervillains and terrorists. Obviously, questions were coming, but Hickman’s choice to hold back on them, when he had 12 issues with which to play, was a surprising story decision. Here, we get hints that not everyone is totally on board (which rather hurts my theory that Xavier is controlling minds by the thousand).

There’s Polaris, above, and Corsair…

It’s still deeply odd that longtime iconoclast Wolverine is going along with this, though… maybe he’s undercover for the Avnegers? It’s rather nice, after all their ups and downs, to see him accepted into the extended Summers family.

Whatever the case, it’s good to see someone questioning the new life offered on Krakoa and it’s extra-dimensional offshoots. And to be fair, Scott Summers’ answers to Laura Dane and his dad, Christopher, sounds reasonable.

But, you know… cult.

I could easily do without the threat of super-Sentinels and the like – where the X-Men are always most entertaining is in the domestic arena. Hanging out at the school on Greymalkin Lane, or sitting in a coffee shop, shooting the breeze. So it is that my favourite scenes this time come at the Summer House (shouldn’t that be ‘Summers’?) on the blue area of the moon. Here’s one of them.

I’m keen to see what the current relationship is between Scott and Jean. They’re both clones, their bodies destroyed in House of X. We know they can be revived at any stage of their life, physically and mentally – Jean’s in her old Marvel Girl outfit, that she last wore when she/her Dark Phoenix duplicate was killed on that very same spot on the moon. But this Scott is the radicalised version of the last few years. Are they together? Have the bad memories of original Scott’s treatment of Jean and wife Maddie Pryor been wiped away, allowing Cyclops and Marvel Girl to love again? Then again, in one of the panels above Scott tells Lorna, ‘ I have you’, which could be read as romantic. And she was his brother’s longtime love, so of course horndog Cyclops would want her. Yeah, it sounds soapy, but Scott literally choose to live on the moon so he can watch as the world turns…

Not all Hickman’s work is successful; the opening words from Storm to Cyclops are painful, even in a medium in which we’re trained to accept expository dialogue.

And we’re still getting the boring diagrams Hickman puts into all his comics, somehow believing that tell is more interesting than show in a visual medium.

Talking of which, the art by penciller Leinil Francis Yu and inker Gerry Alanguilan is pretty strong – not as pretty as the HoX/PoX series, but expressive and they deserve credit for remembering to make the naturally aged Corsair look older than his son, something many artists forget. And they’re cracking when it comes to gorillas with PhDs…

I’m not keen on the new (?) looks for Cyclops and Prestige (Rachel Grey/Summers, still searching for a superhero name that fits), which are deadly generic, both have plenty of better looks they could use. It’s likely telling that even though he professes homebird tendencies, Scott still eats, drinks and does the dishes in his working duds.

Sunny Gho’s colours are splendid, as are the letters of Clayton Cowles. Gho also colours Yu’s cover, the highlight of which is the Bill Sienkiewicz-like treatment of Havok’s power signature.

Whether I’ll continue with this book depends on how the balance between ideological action and entertaining chat/intrigue turns out. I’ll likely be here for at least a few issues to see how soon someone tells Magneto to stop acting like he’s in the world’s scariest production of Godspell, and what the Summers mutants on the moon (moon-tants?) will be getting up to. Meanwhile, this is a more than decent start to the new era, with oddness to the fore.