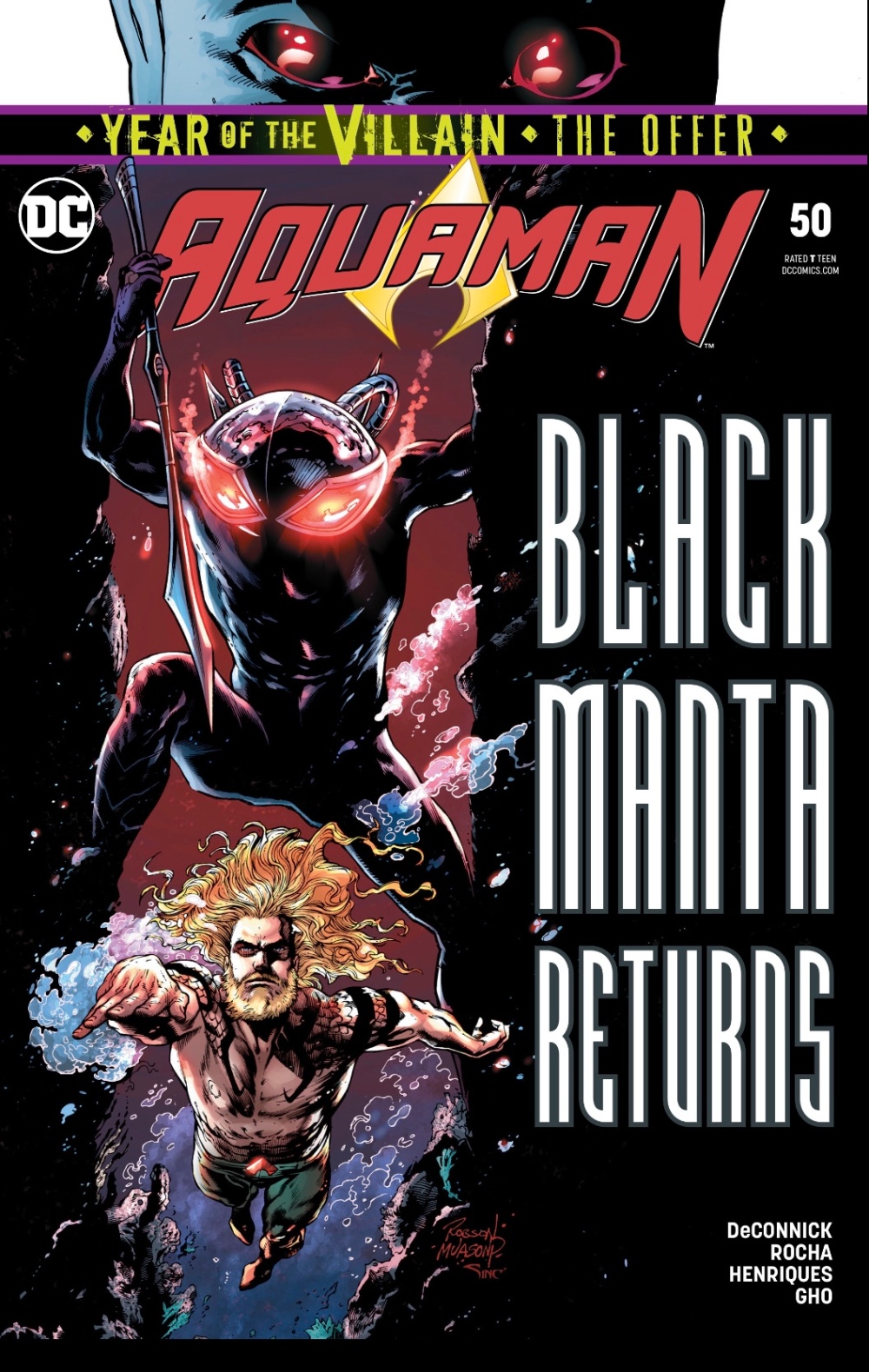 It’s been a while, but Aquaman is back in Amnesty Bay. And he’s brought friends. 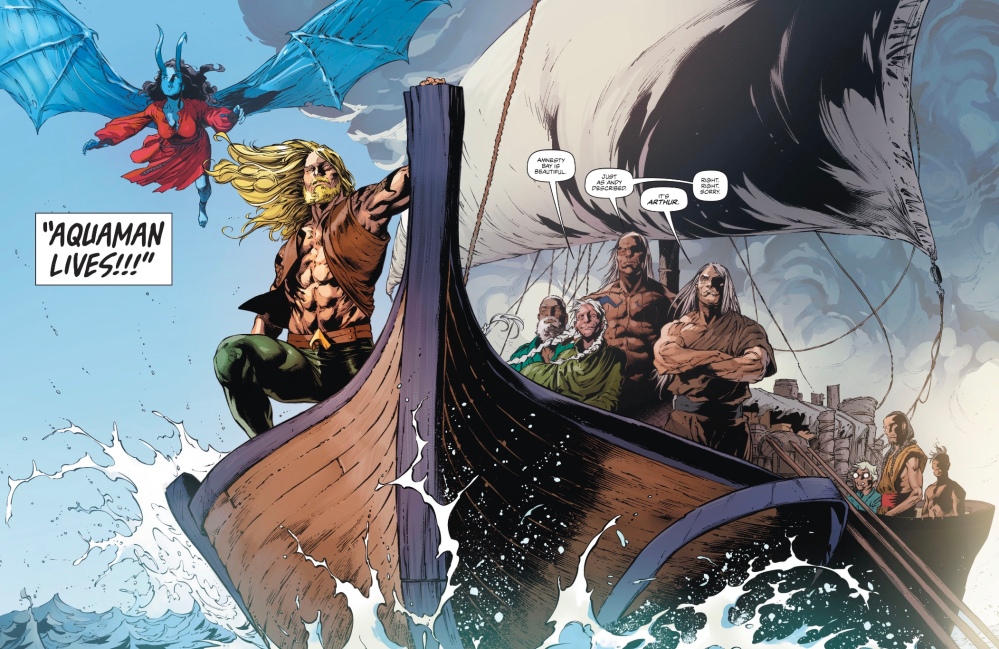 The old sea gods he met during a recent bout of amnesia need feeding, and where better than Maine, with its legendary seafood? Having heard he was dead, Arthur Curry’s friends in the community show up to welcome him back. As does one of his superhero mates. 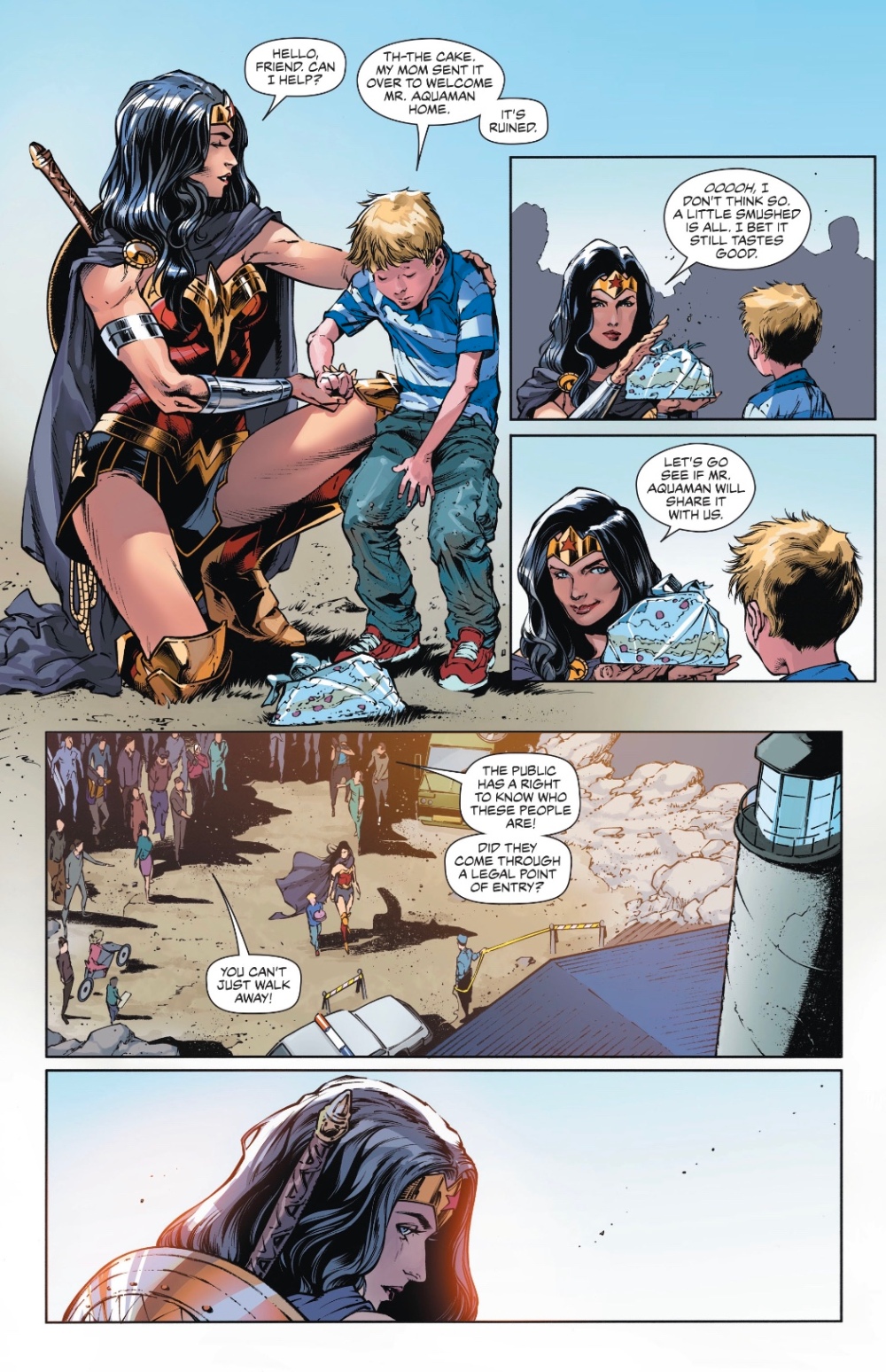 Arthur tells Diana why Mera isn’t with him. 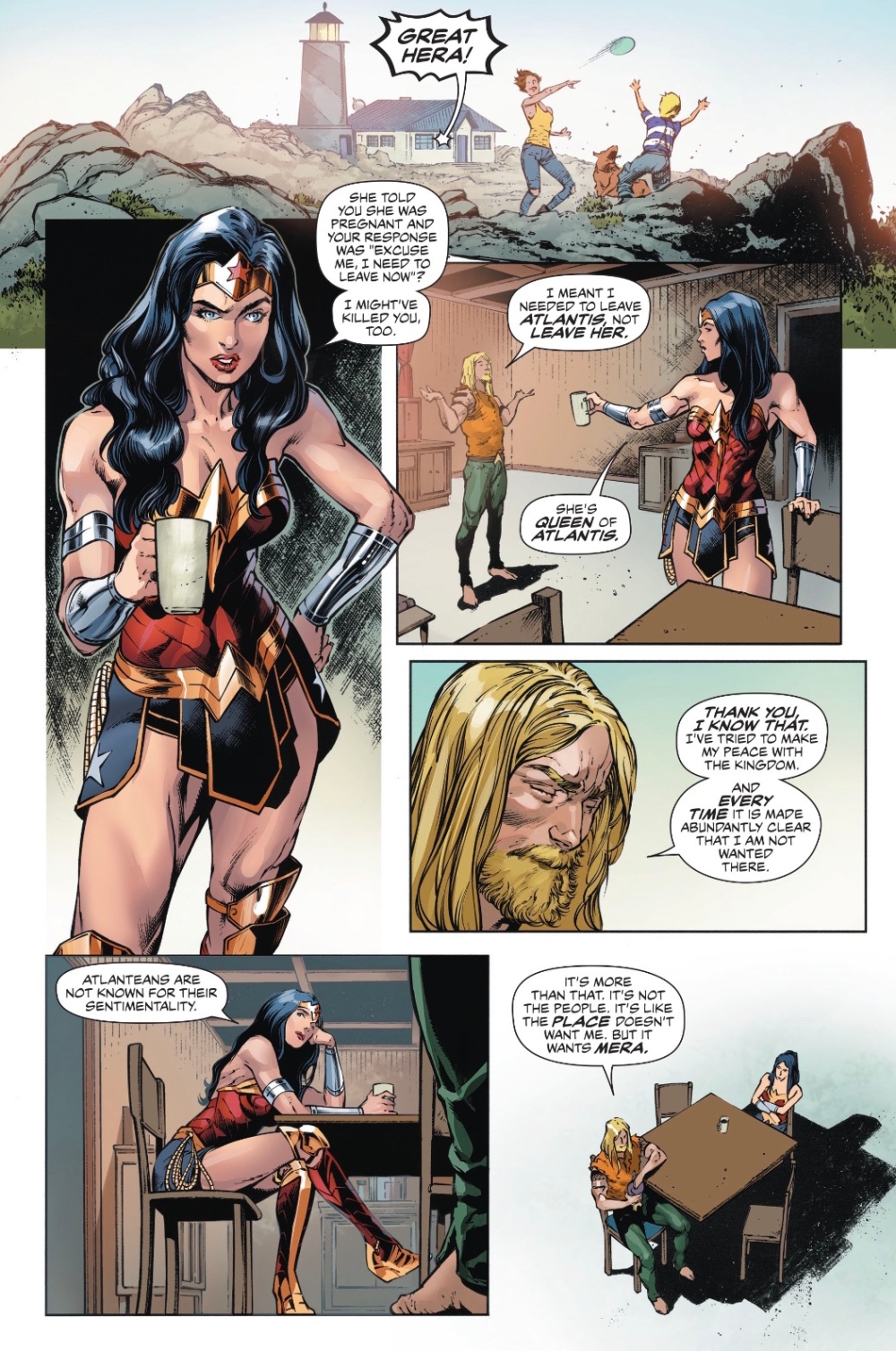 As for Mera herself, she’s attending to the day-to-day duties of a hands-on Atlantean queen… 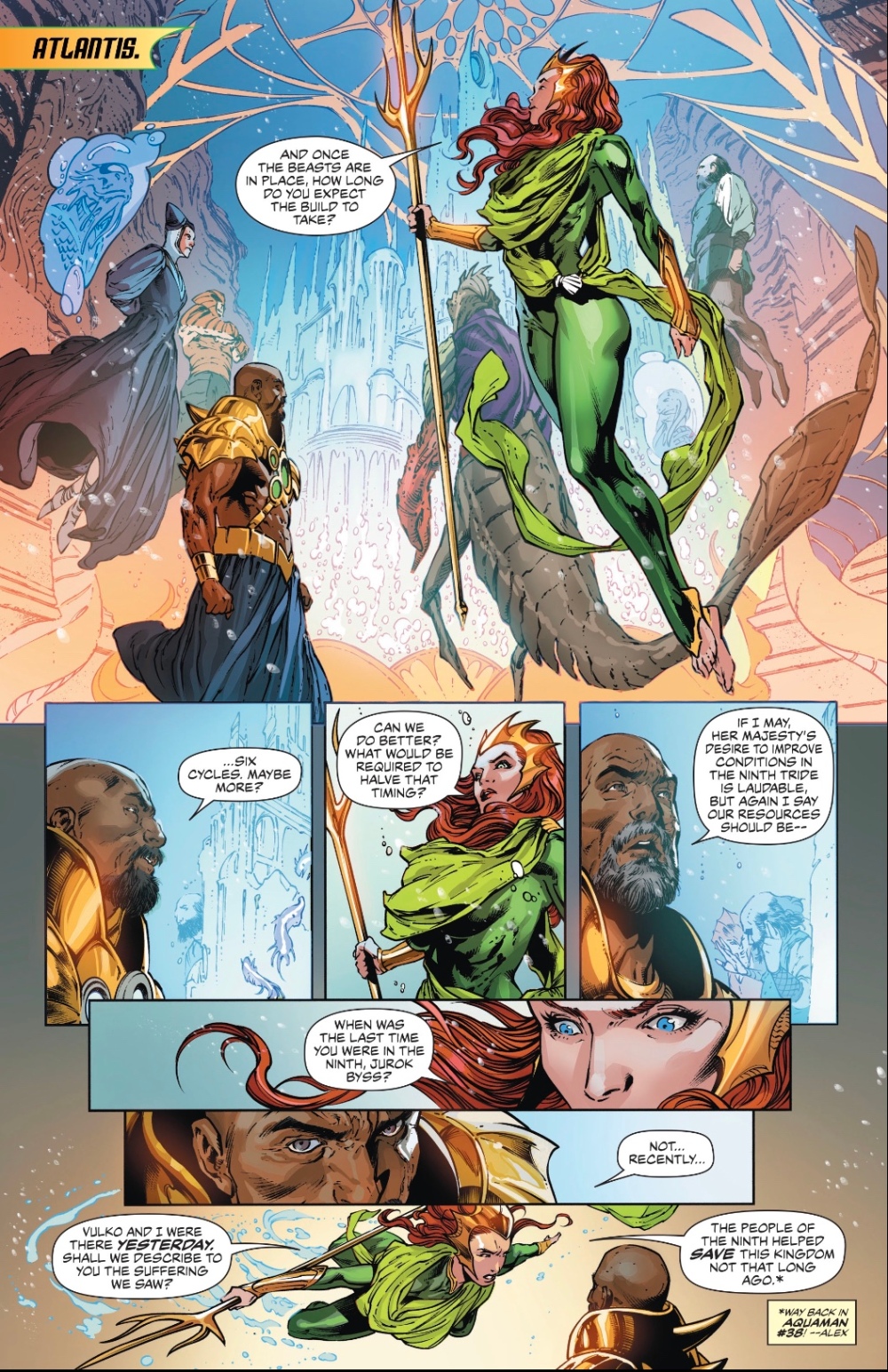 … and facing pressure about her likely upcoming status as an unmarried mother. To protect the line of succession, Mera must be wed. 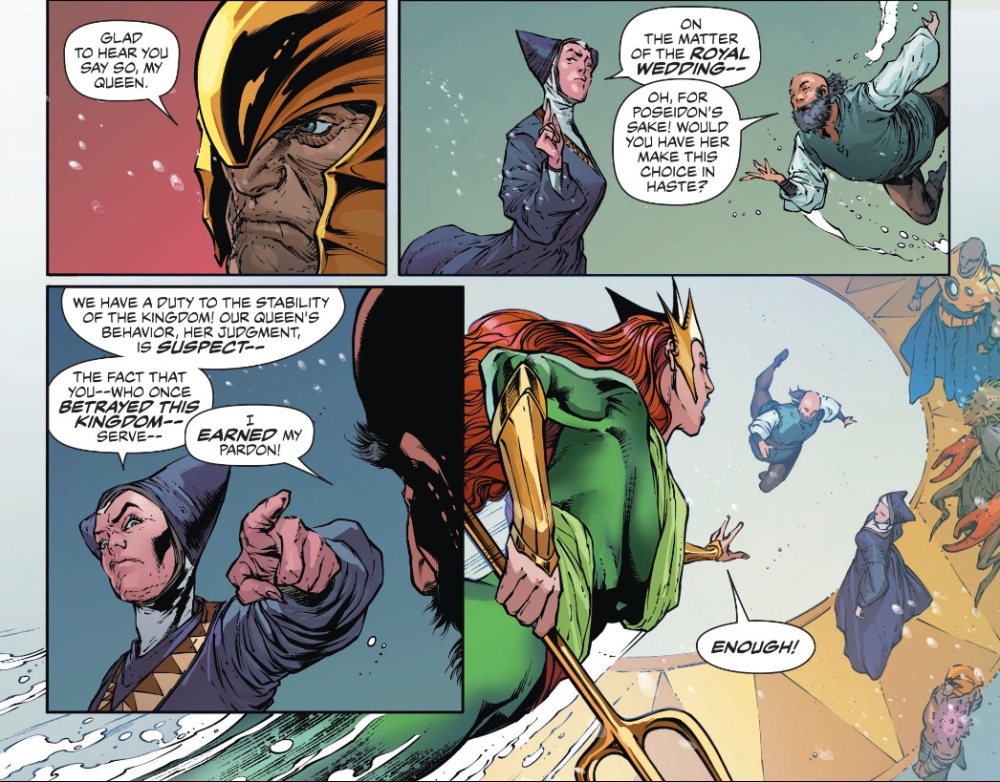 I really enjoyed this 50th issue of DC’s Rebirth-era Aquaman. Sure, a few pages in this extra-sized issue could have been given over to, if not outright action conflict, some aquatic feats. And there’s a bit of a continuity flub concerning Aquagirl… but, this is a thoroughly engaging read from writer Kelly Sue DeConnick, main penciller Robson Rocha and friends. There’s a naturalism to the dialogue and relationships that’s rare, and the subplots are stacking up nicely. The return of the Amnesty Bay setting is a plus, given it doesn’t stop us checking in on Atlantean life – I had assumed the engaging story threads of previous writer Dan Abnett had been abandoned indefinitely, but here we are with both the the Ninth Tride – the Atlantean slums – and the Widowhood present.

The return of Amnesty Bay cop, and Arthur’s old school pal, Erika brings with it a spooky old legend that will no doubt feed into the main narrative, and we learn something new about her. It’s also good to have Aquagirl Tula around, even if the waters get muddied as regards her family status. Early on we have this moment… 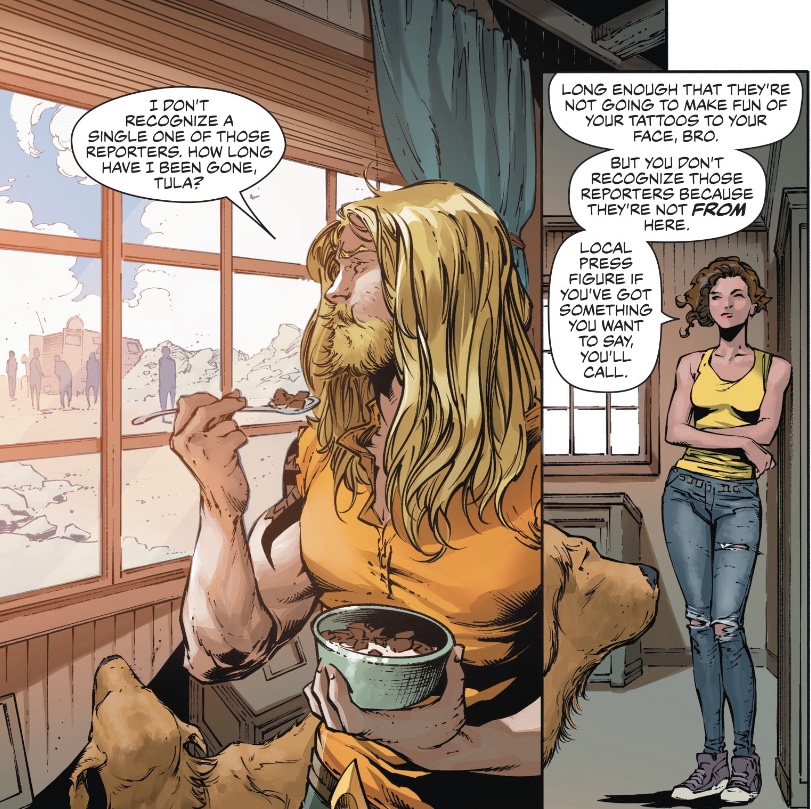 … which is fine, even though the Atlantean-raised Tula doesn’t seem the sort to use the annoying term ‘bro’. But then we get this… 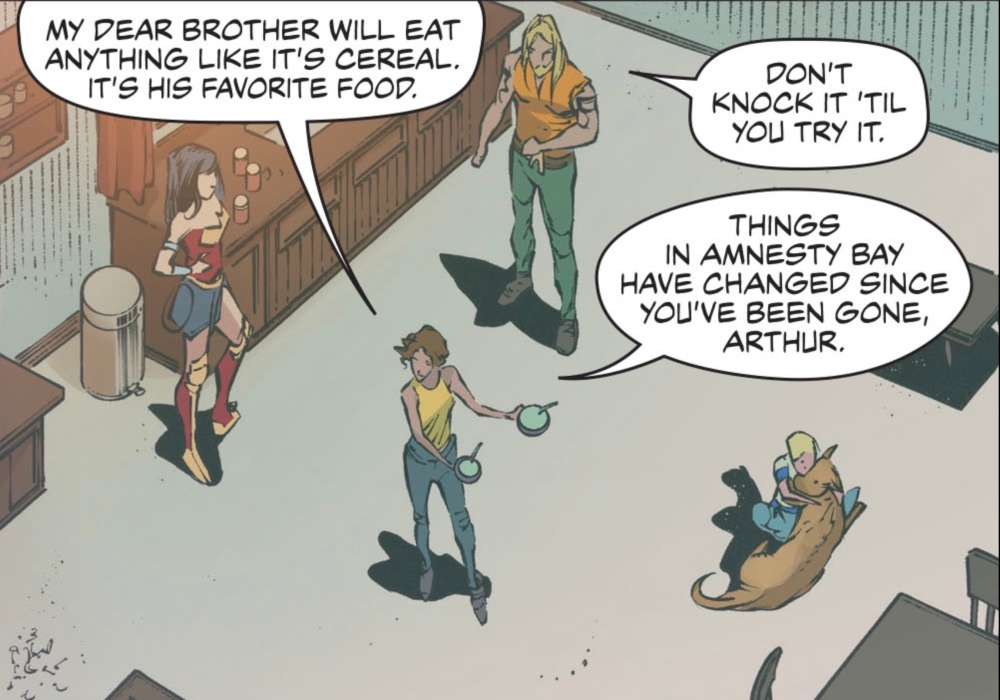 … that’s not someone being pally, that’s Tula saying she’s the literal sister of Aquaman. Which wasn’t the case previously – she’s the sister of Orm, Ocean Master, Aquaman’s half-brother – but given DC’s ever-changing continuity, who can tell? I’ll put it down as a little error and not worry about it too much but, you know, EDITOR!

Other things I like include the presentation of Wonder Woman, which has me hoping DeConnick tries a run on her book at some point; Aquaman’s food preferences; and the occasional nod to real-world current events.

As for Mera, she remains one of the most charismatic comic characters around, as strong and surprising in her character as she is visually appealing. Penciller Robson Rocha and inker Daniel Henriques give her an elegant, imperious bearing that works for her role, and a wide range of emotions on her face.

My favourite scenes this issue, though, were those telling the story of lighthouse keeper Captain Maurer, which are cleverly composed and rendered by Rocha with Henriques, and moodily coloured by Sunny Gho. Clayton Cowles letters throughout, and makes the words look good.

This issue also has a four-page Year of the Villain sequence tacked on at the end, with art by Eduardo Pansica and Julio Ferreira, in which Black Manta is approached by the new version of Lex Luthor, the pasty looking fella in Destiny drag.

Great as it looks, I can’t say I’m that interested, DeConnick isn’t a writer who needs story suggestions.

Still, this bit does motivate a striking cover image by Rocha, inker Paz and colourist Alex Sinclair. The left-hand picture is dramatic, the right-hand lettering striking… and the Year of the Villain trade dress annoyingly distracting.