The Doom Patrol are back with a new series. After a gap only marginally longer than the unscheduled breaks between issues of the previous run, the World’s Strangest Heroes have a new mission – to visit weird new worlds and help out where they can.

You can’t argue with that. I’m all for heroes doing good simply because it’s the right thing to do. I can, and will, argue against the image which opens this book – Cliff Steele taking a dump. The former Robotman looks terribly happy, which is likely the writers’ way of telling us he’s relishing every last experience now he’s human again. Me, I could do without seeing This Sort of Thing when I’m having my breakfast – there are so many aspects of being fleshly that would have made the same point… I really don’t wish to see my heroes having a crap on a filthy throne. 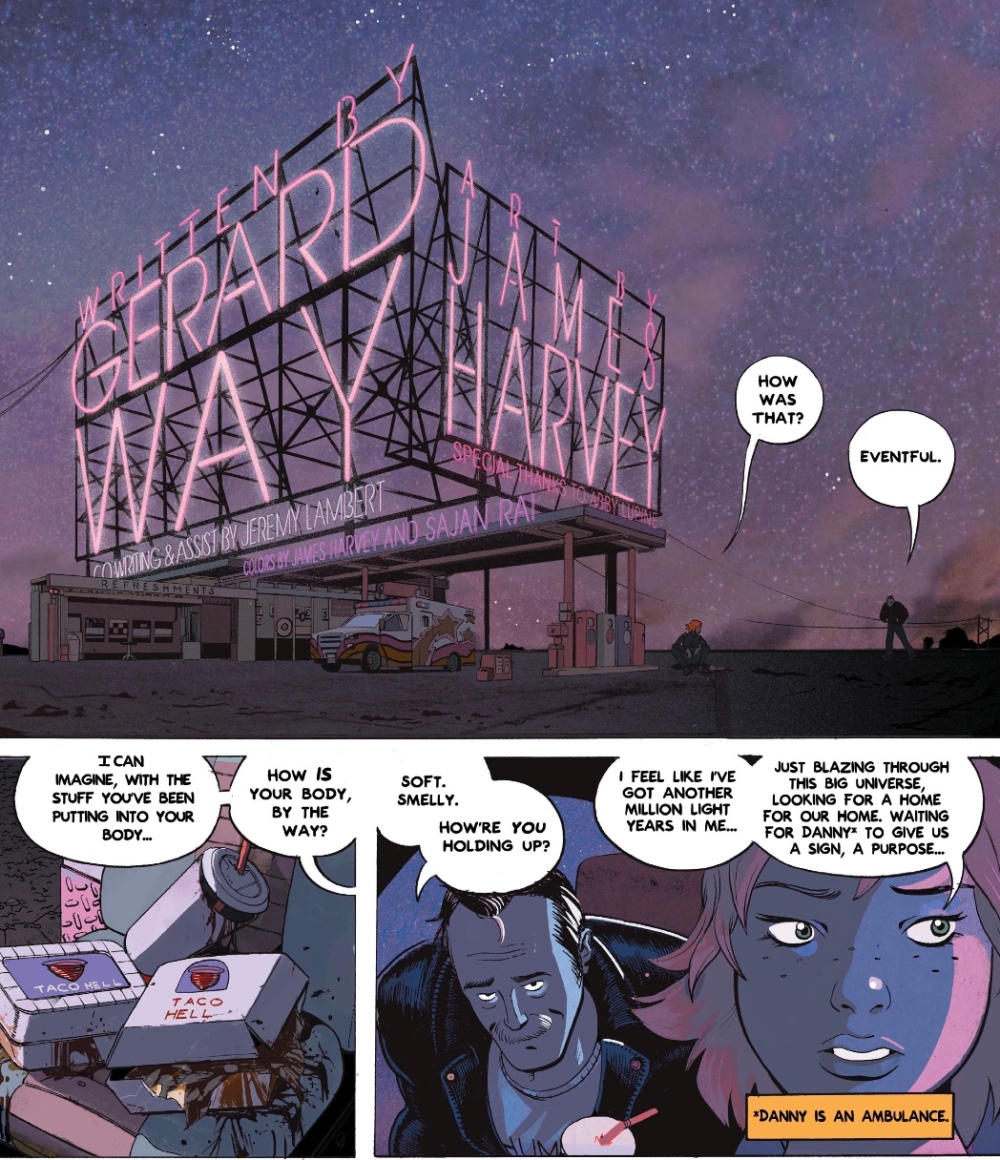 If this is writers Gerard Way and Jeremy Lambert setting the tone for the new series then I won’t be around for long… it all seems so childish.

Which is a shame, because this issue’s artist, James Harvey, working with colourist Sajan Rai, produces some appealing pages – the vibe is Independent rather than DC house style. I especially enjoyed the scenes set on the planet Orbius.

But that’s putting the cart before the sapient transvestite ambulance. Prior to crossing the galaxy, the members of the Doom Patrol engage in minor moments of sub-plottery. Rita, after time as a ‘space Christ’, bids to reclaim her status as Elasti-Girl. Flex Mentallo regains a memory. Negative Man decides he needs a particular friend to help him cope with bad dreams.

Crazy Jane is coming to terms with being leader of the team. Lucius the man-cat learns that boy wizard Lucius has joined up.

Finally, Jane asks Danny to simply ‘take us where we can help’ and off he heads to Orbius, picking up Rita, Flex, Larry, Lucius and Hank along the way. It turns out the people there are slaves to a god name Jud’la, whose herald is Gerb, the Messiah. 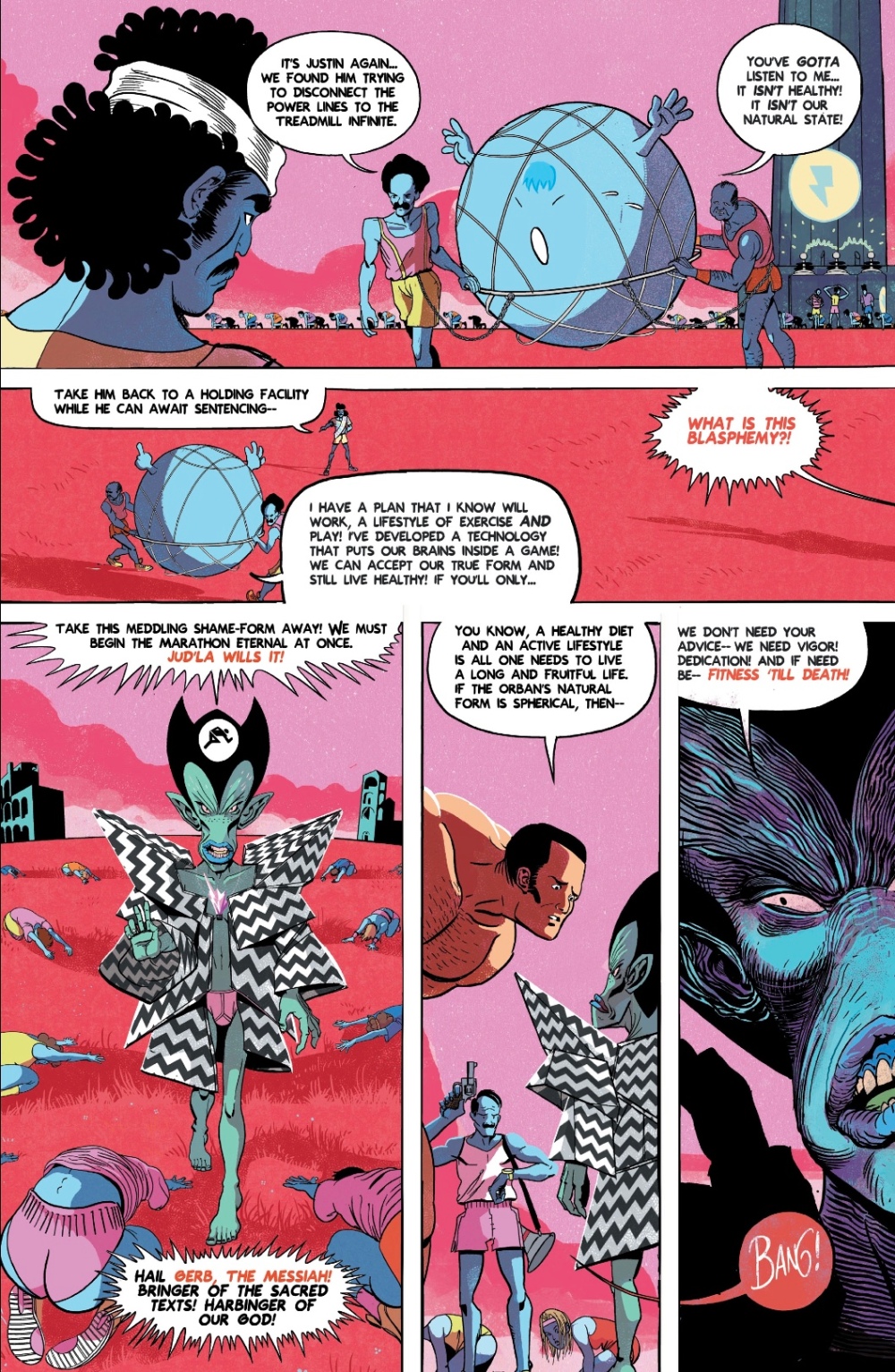 Can the Doom Patrol help the people of Orbius outrun death and Seventies leisurewear?

You betcha… but back on Earth, will Cliff survive his mother’s understandably harsh tongue? 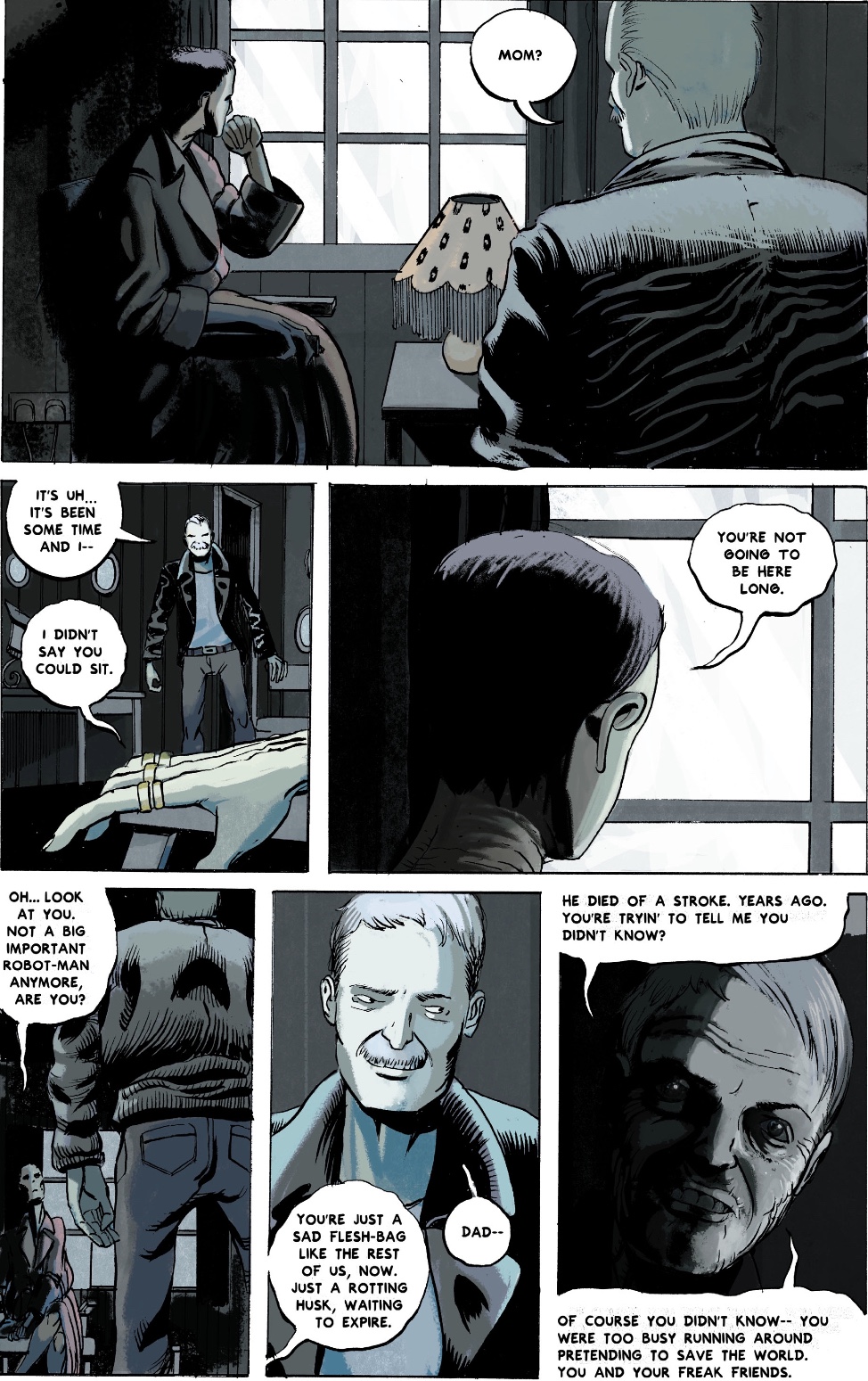 It’s Cliff’s situation that eventually brings a great cliffhanger – I saw it coming, as most readers likely did, but it doesn’t mean I’m uninterested. That’s because Cliff is one of the characters I care about in this book. Pouting teen demon worshipper Lucius? Nope. Lotion? Random taking up page space. Casey Brinke? If Danny really needs a driver, former race ace Cliff has that covered.

This book simply has too many participants. Cliff, Rita, Flex, Larry and Jane all have memorable power sets, established personalities and colourful histories on which to build stories. But Lucius is a living funfair crane, able to grab a deus ex machine with his eyes closed. Casey can instantly drive the team wherever they need to be for a dose of whimsy. Lotion… has he ever done anything bar kiss Casey?

I was tickled by the Orbius business. Gerb – a tribute to comic satirist Steve Gerber? – looks terrific and his Treadmill Infinite presents a challenge to the DP for at least two minutes. Flex Mentallo in incongruous spectacles looks amazing. His message on mental health and body image is wonderful. And how cool that the QR code on Cliff’s DP membership card actually works… try it, if you haven’t already.

But overall, this issue could have done with being pared down in terms of ambition; I appreciate that every character is properly introduced, in amusing text boxes, but there’s little time to focus on the business of anyone except Cliff. The Orbius mission is so cursorily set up, and quickly tied up, that it feels stakes-free. And it doesn’t say much for animal shelters in the DC Universe that a weirdo can wander in and be given a pup with no checks – does Hank have a dark secret that explains why the home wants rid of him? It says even less for the team that they’re letting Larry bring a ‘companion animal’ into outer space… how could he not freak out?

I love the way the main creator credits are incorporated into the art, once as the focus of the eye, then as a vanishing piece of scenery; the shelter girl’s design is perfect; and the change in mood for Cliff’s visit to his mother is palpable in the book’s most effective scene, brilliantly painful because it feel so truthful. And there’s some fine stippling to convey the movement of Danny the Ambulance. 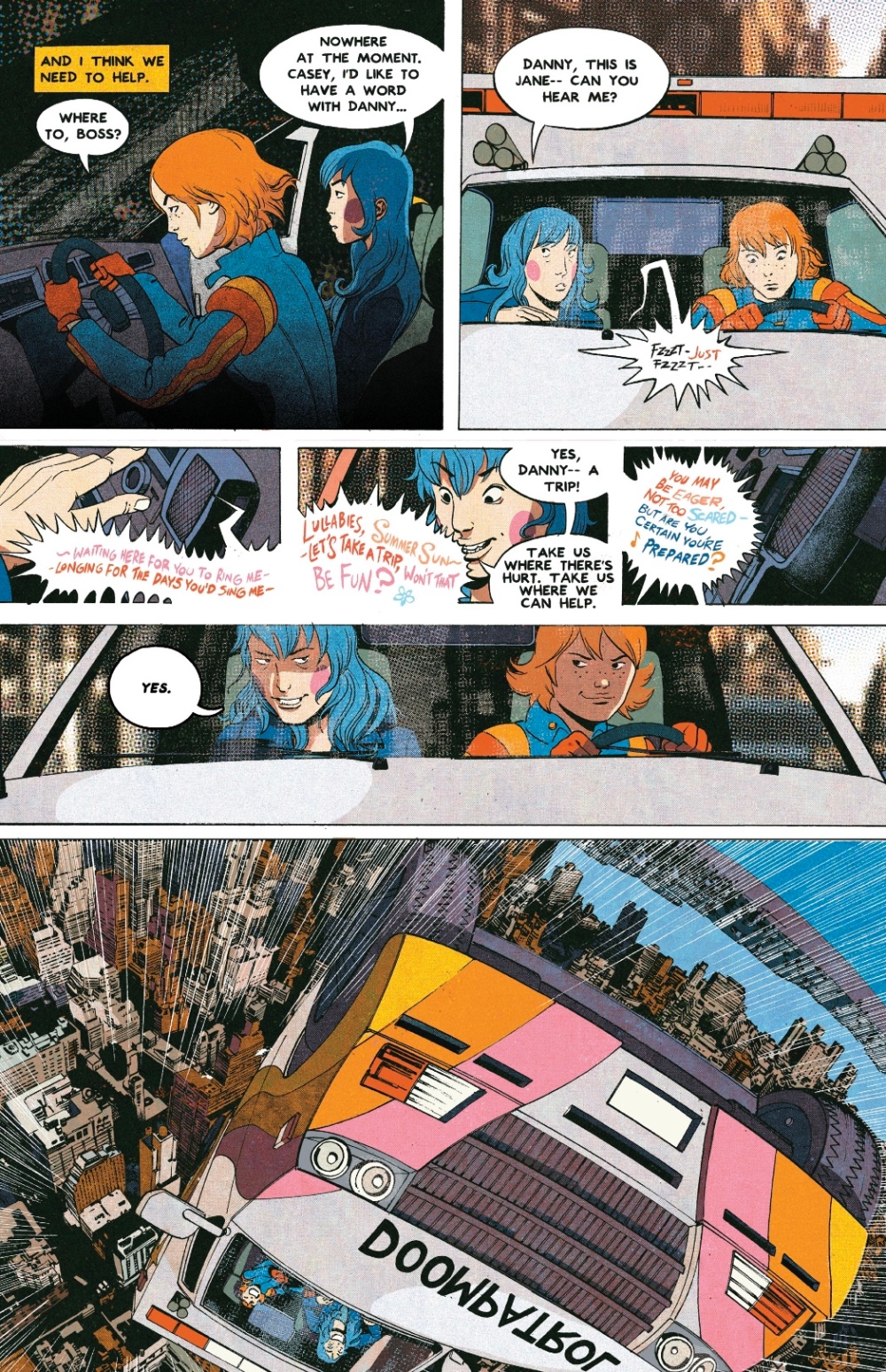 I’m not so keen on the current design for the Negative Being, it’s basically a beak with arms. Harvey, though, is excellent at conveying Larry’s flat mood via body language.

I don’t like the lettering. No one is credited so I suspect it’s Harvey being given free reign to make the pages more ‘his’. Some artists can letter. Dave Gibbons. Jim Aparo. Andy and Adam Kubert both lettered for DC before making the leap to illustrator. But unless Harvey is deliberately going for a primitive look, he should stick to what he does better. And if this naive style is deliberate, it’s not working – it’s tough to read and detracts from the visuals. Editors Molly Mahan and Andy Khouri need to knock it on the head.

I do like Nick Derington’s cover, bar Elasti-Girl looking about 12.

While this isn’t quite the Doom Patrol as I’d like to see it, there’s a lot of potential here. Pare down the cast, build on the subplots and make more of any given A-plot and we could have a great comic.

7 thoughts on “Doom Patrol: Weight of the Worlds #1 review”