Lois Lane is on the case. She’s investigating government wrongdoing from her base in a Chicago hotel, but has one big concern. 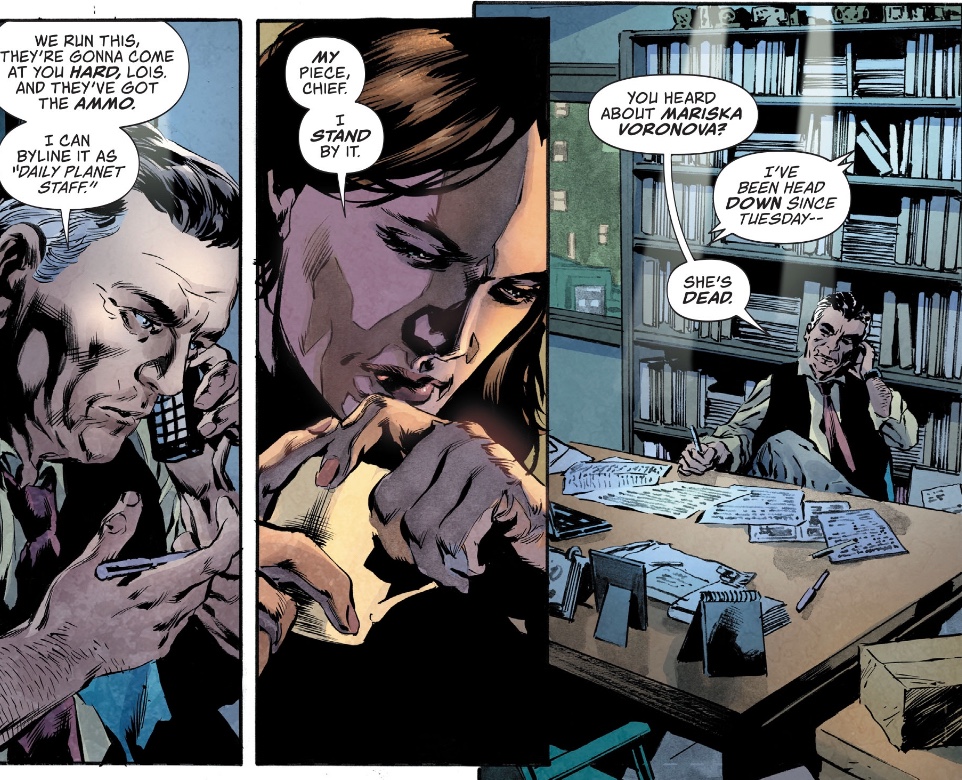 Wanting to learn the truth behind Voronova’s death, Lois brings in a contact. 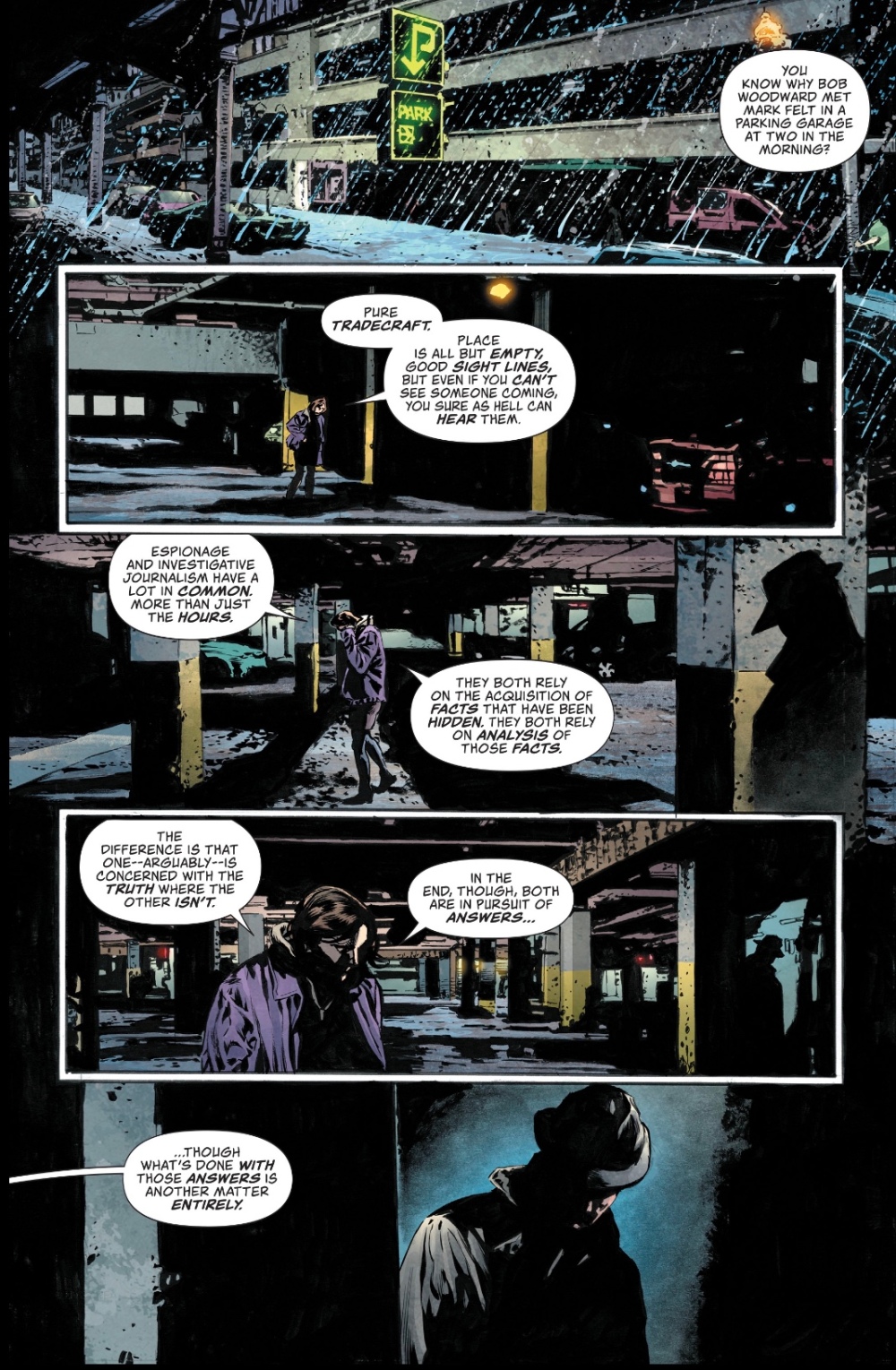 Next morning, after a conjugal visit from her husband, a morning walk is interrupted by a passer-by giving his opinion of Mrs Clark Kent’s recent public behaviour, motivating a tough conversation.

In Russia, The Question – Renee Montoya variety – investigates the death of Voronova. 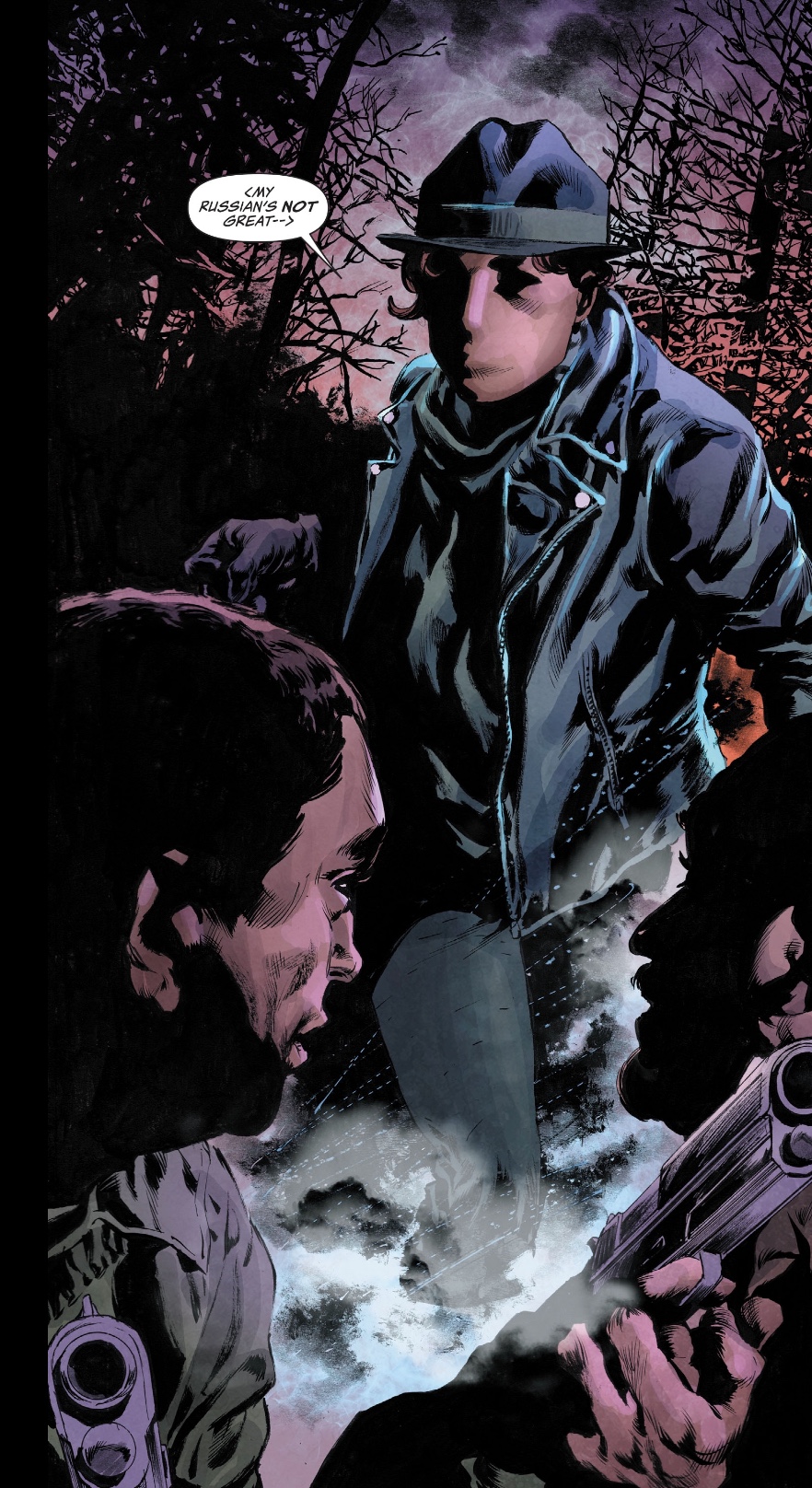 And in Washington DC, Lois closes in on a dodgy government mouthpiece.

Well, that was a Greg Rucka comic. Hard-drinking characters, a swear word never far from their lips, in a political thriller. A supposed good guy murdering an assumed bad guy. A character spouting unbelievable, irrelevant dialogue to show off the writer’s research.

As a lifelong fan who adored Lois’ Silver and Bronze Age book, I so wanted to love this comic. As it was, I like parts of it. When Rucka is good, he’s great. The scene with Perry White rings true, he actually sounds like an editor, which is rare. The chemistry between Lois and Clark is undeniable. Lois at the press conference is terrific.

But there’s just as much I’m really not keen on. Lois implied to be a heavy boozer. The Question as surprise co-star. Son Jon namechecked but not given a moment’s thought by his parents.

It’s not like I want Lois to be a saint. She’s been shown as difficult previously, most notably in the brilliant Mindy Newell/Gray Morrow micro-series of the Eighties (which this issue echoes in featuring Clark, but not Superman). In the Golden Age she liked a drink when out on the town with that milksop Kent. But she’s never been someone for whom a well-stocked minibar is an essential. She’s never been one to keep secrets from her husband. And having spent years trying to net Superman, it’s unbelievable that having nabbed him she’s spent months living apart from the man she loves, with no end in sight. Yes, the situation was set up by Brian Bendis over in Action Comics, but I suspect it was at Rucka’s behest – he’s really ramping up the hard-ass hack bit, the notion that a partner is someone for sex, not companionship.

When DC Rebirth began we had a Lois who was a writer, but also a wife and mother; now her son is off-panel and about to be exiled to the 32nd century, and her husband is an inconvenience. The beautiful stories of the Superman Family have been pretty much disavowed so Lois can be a gritty solo character.

How much more interesting would it be to see Lois and Clark continuing to balance their lunatic lives with being good parents to a Super-Son?

Judging this comic for what it is, a piece of political noir featuring a version of Lois Lane, it’s pretty decent. I’m all for powerful personalities getting their time in the spotlight. But does Lois have to be a Ruckawoman? We already have the damaged charisma of Renee Montoya on display. Having recently been shown by Bendis to be a secret smoker, will Lois be joining The Question in some superhero smoking room?

Something I have no complaints about is the art of illustrator Mike Perkins and colourist Paul Mounts. Perkins’ characters are consistent, they move through a realistic world, the action scenes are unashamedly messy and brutal. Mounts’ tones add to the naturalistic feel, and I like the subtle way he adds accents of purple, a colour that’s become something of a Lois signature, to the pages. Perkins’ cover is stunning. And the lettering of Simon Bowland is as effective as it is unobtrusive.

Do my problems come down to a bad case of ‘not my Lois’? Yes and no. I’d argue that this isn’t my Lois, but neither is it DC’s Lois – certainly not the character we’ve known for decades.

That said, I’ll be back next month… hey, Lois Lane has a book again. There’s top talent on it. I’ve only read Chapter One. Who says I won’t be pleasantly surprised as the story gathers momentum?