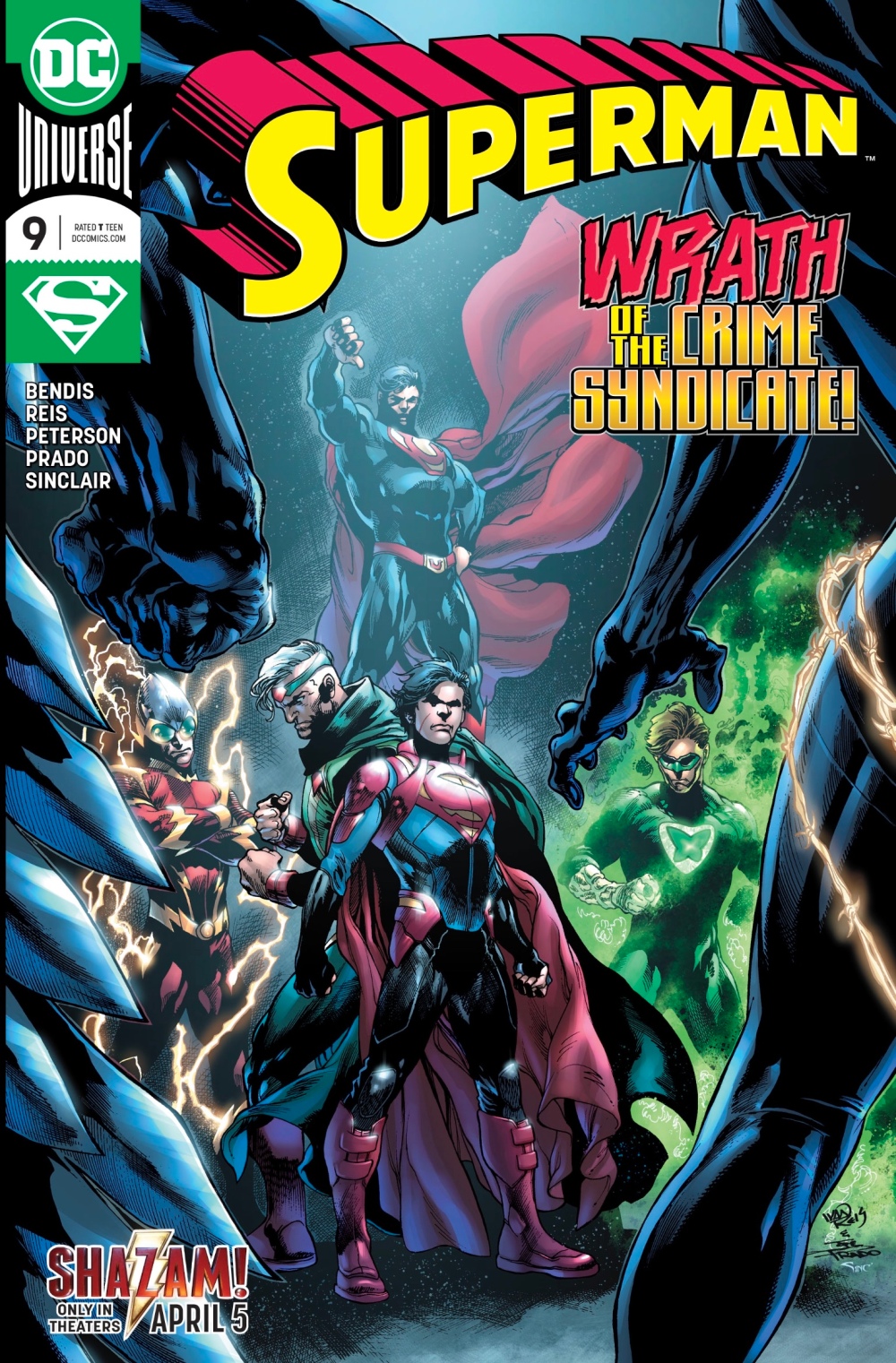 ‘North Americans don’t do irony.’ It’s a cliche, usually put about by pompous Brits (ahem). And it’s not really true. OK, Canada’s Alanis Morissette is the poster person for misunderstanding the term, but plenty of folks across the Pond get it just fine. Superman writer Brian Michael Bendis? I’m not so sure.

‘Dad, it was just so much talking. He would sit there and talk and talk.’ Quite.

Then again, Bendis may be the King of Irony, and he’s ‘aving a larf.

So yes, that’s Ultraman of Earth 3’s Crime Syndicate of America, in a flashback narrated by Jon Kent, just returned from what was meant to be a summer vacation in space, several years older than when he set out. He began his tale last issue, and resumes it here, but not before a strange vision is experienced by Jon’s dad. 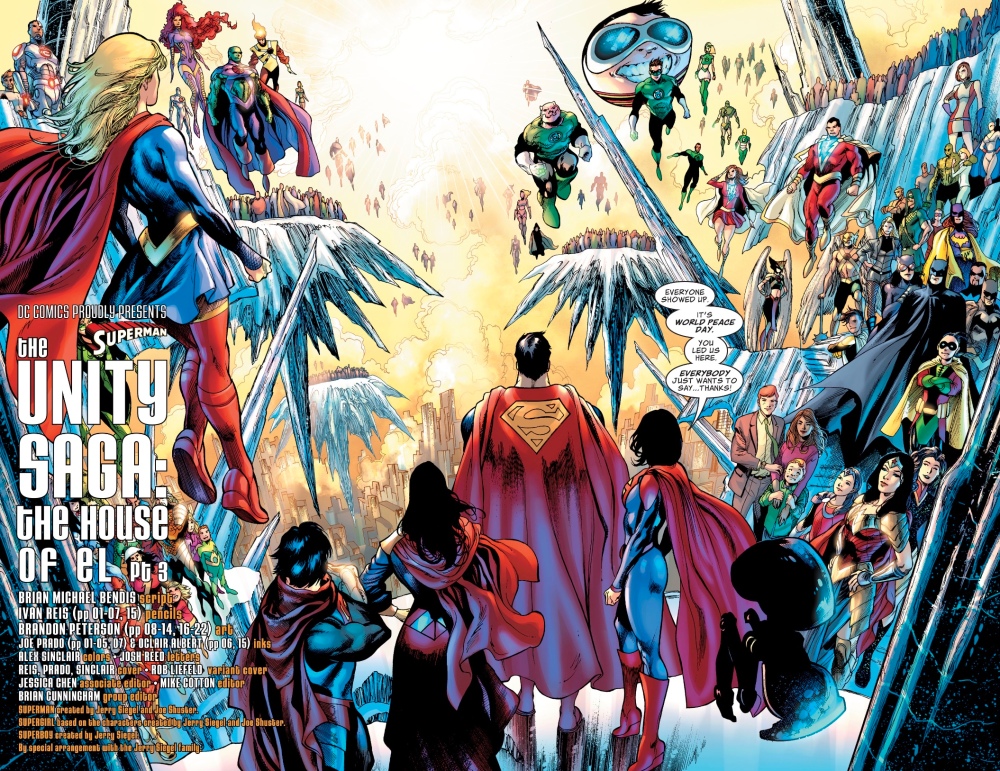 A world in which peace reigns, a planet so idyllic that even longtime enemy General Zod admires the Superman Family? Superman snaps out of it, and Jon tells him and mother Lois how space-time shenanigans landed him on the alternate Earth where, after a painful encounter with the CSA, he was kidnapped by Ultraman. His powers fading due to a difference in solar energy, Jon is imprisoned in a volcano and brutalised.

According to Jon’s story, he finally escapes and makes his way to the CSA’s version of the Hall of Justice, looking for a way home. There, he finds someone even scarier than Ultraman…

You’ll have noticed that ‘according’. I’m still not buying that this is our Jon, aged but basically the same kid. Last time, I wondered if it was actually the Earth 3 version pretending to be Superboy, enacting some mission for his evil parents Ultraman and Superwoman. My latest theory is that this is our Jon, but ‘Stockholm-syndromed’ – years of abuse, lectures from the ‘Jersey City version of my dad’ and a nice fresh piglet have turned him bad, and he’s spinning a plausible yarn intended to help Ultraman achieve his longtime ambition to rule Earth (Whatever It Is This Week).

Lord, I hope not. It’s bad enough that we might be stuck with a late teens Superboy rather than the cute kid we’ve come to know post-DC Rebirth, but a mind-mangled Superboy Prime 2? It’s not like his parents can even send him to that nice Sanctuary place to sort him out.

I found this issue a tad frustrating. It looks gorgeous, courtesy of artists Ivan Reis, Joe Prado and Oclair Albert on the vision and current day pages, and Brandon Peterson handling Jon’s tall tale, with Alex Sinclair colouring, and Josh Reed lettering, the lot. The Earth 3 pages, especially, are luscious, despite the horrors they portray – a spread with the CSA is especially eye-catching, and while that talkative Ultraman page had me wondering about Bendis’ intent, it’s a cleverly conceived moment. And the vision is intriguing, I’m a sucker for a Super-Daughter, going right back to the days of Lola Kent (anyone else old enough to get that reference?). I love her panelled loincloth dress thingie (technical term).

But, this issue comprises another long flashback/possible lie, a vision/possible flashforward and a few more pages of Superman and Lois handwringing over letting their little kid go off into space with mad grandpa Jor-El. I just want everything to come together in the present so that we can move beyond this business with a prematurely aged Jon, and get the real modern Superboy back.

That vision ends with something destroying the Superman Family and as Superman snaps out of it, there’s only one name on his lips.

How odd. We see Jimmy on the splash spread with, presumably, wife and son (the missus looks like a weirdly smiling Talia, tying in with current events in Action Comics), but he’s nowhere on the page in which all hell breaks loose. 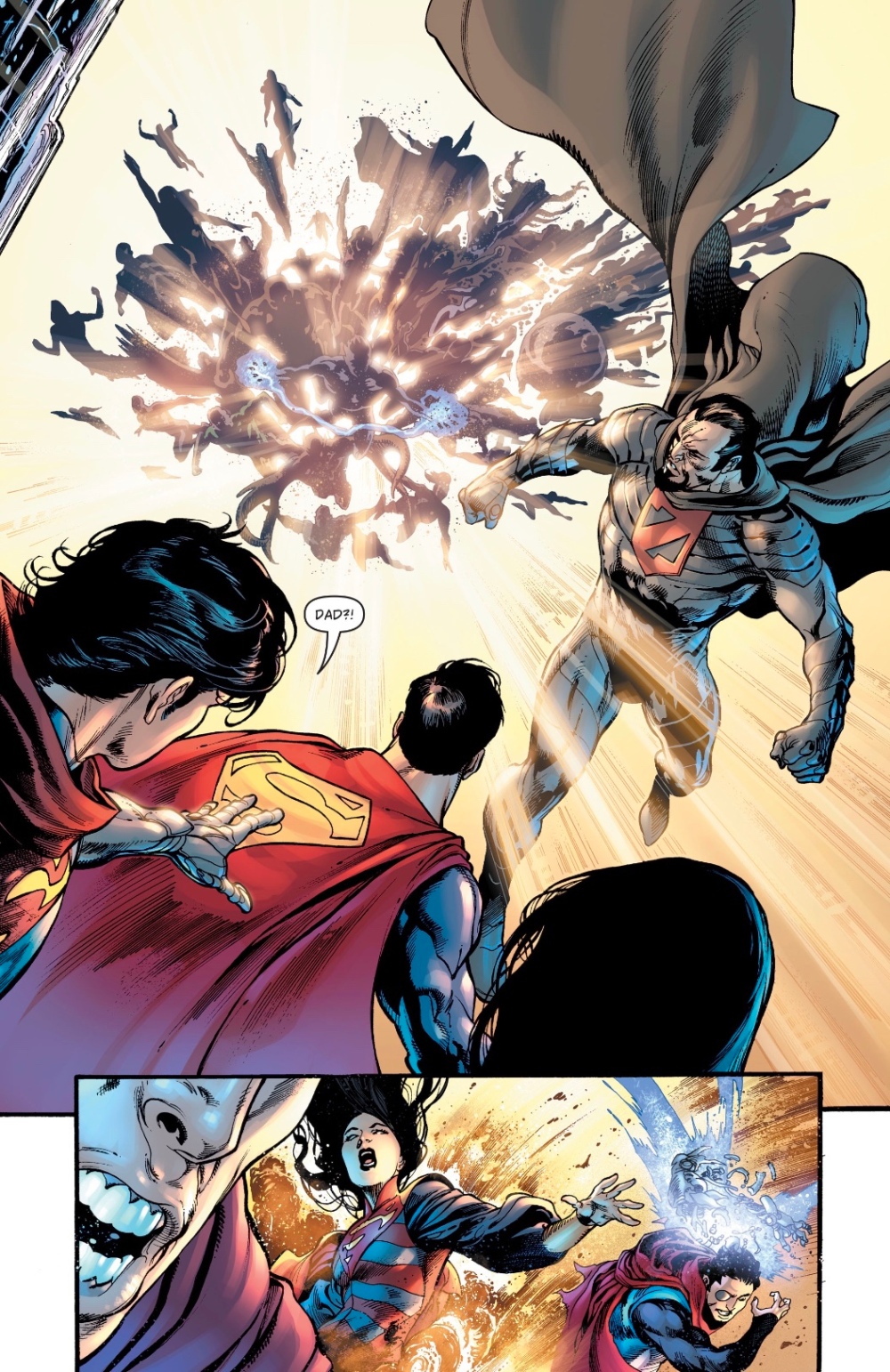 And while I at first assumed that was the extended Zod Family, a closer look at the greyed-out figures has me thinking Bouncing Boy, Gates, Cosmic Boy, Wildfire… is this a Servants of Darkness version of the Legion of Super-Heroes? OK, that ‘Bouncing Boy’ could be the spherical Plastic Man from the opening spread, meaning the rest would be the other World Peace Day heroes, but a boy can dream!

Bendis’ presentation of Ultraman as a lonely figure – unsurprising given his wife and supposed best friend hate him – is interesting, but the ‘Joisey’ speech patterns? It’s too much, far too late in his comic book career. And I hate him assaulting Jon, who’s barely ten years old at this point – adults punching kids really isn’t what I want to see in my superhero comics. I realise this book is rated Teen, but still… which brings up another question, why the heck isn’t there an all-ages Superman comic?

If Jon’s tale is all true, I admit I’d be rather intrigued to see a short, self-contained story or two about his time sneaking around Earth 3, doing good and being hated for it. But not now – in a giant, or back-up, a couple of years down the line.

The cover by Reis, Prado and Sinclair is a tad unmemorable, I had to go back in my digital edition to remind myself of what’s on the front of the book. It promises Jor-El in trouble, something we don’t see this time. Oh well, probably next month… with luck he’ll then be revealed as Ultraman’s dad, not Superman’s, and we can never mention the unfortunate Mr Oz again.

The Rob Liefeld variant is pretty nice, I can see he’s put some real effort in.

All in all, this isn’t my favourite Superman issue of the Bendis run, but it did give me lots to think about, and looks terrific. That’s something.