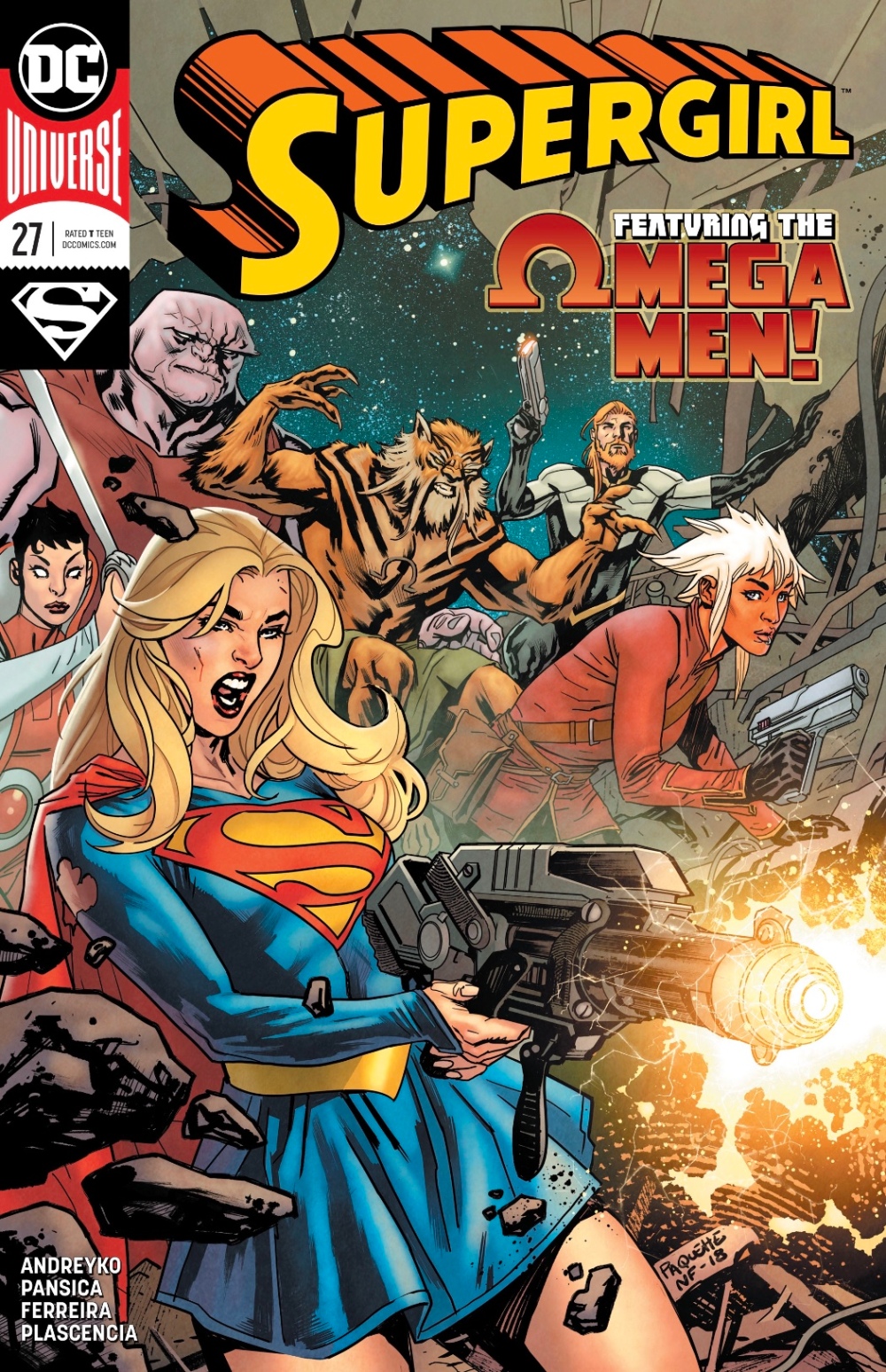 Deep in outer space, Krypto is in trouble. Happily, Supergirl’s new friend, Znd’r Kol, is determined to save the Dog of Steel… even if it upsets his mother.

On the other side of the warship, Kara fights with the Omega Men to save captive extraterrestrials from an army of evil empire The Citadel, helmed by exiled Earthman Harry Hokum. His ace in the hole is Splyce, a genetically engineered blend of Durlans, Tamaraneans and heaven knows who else. 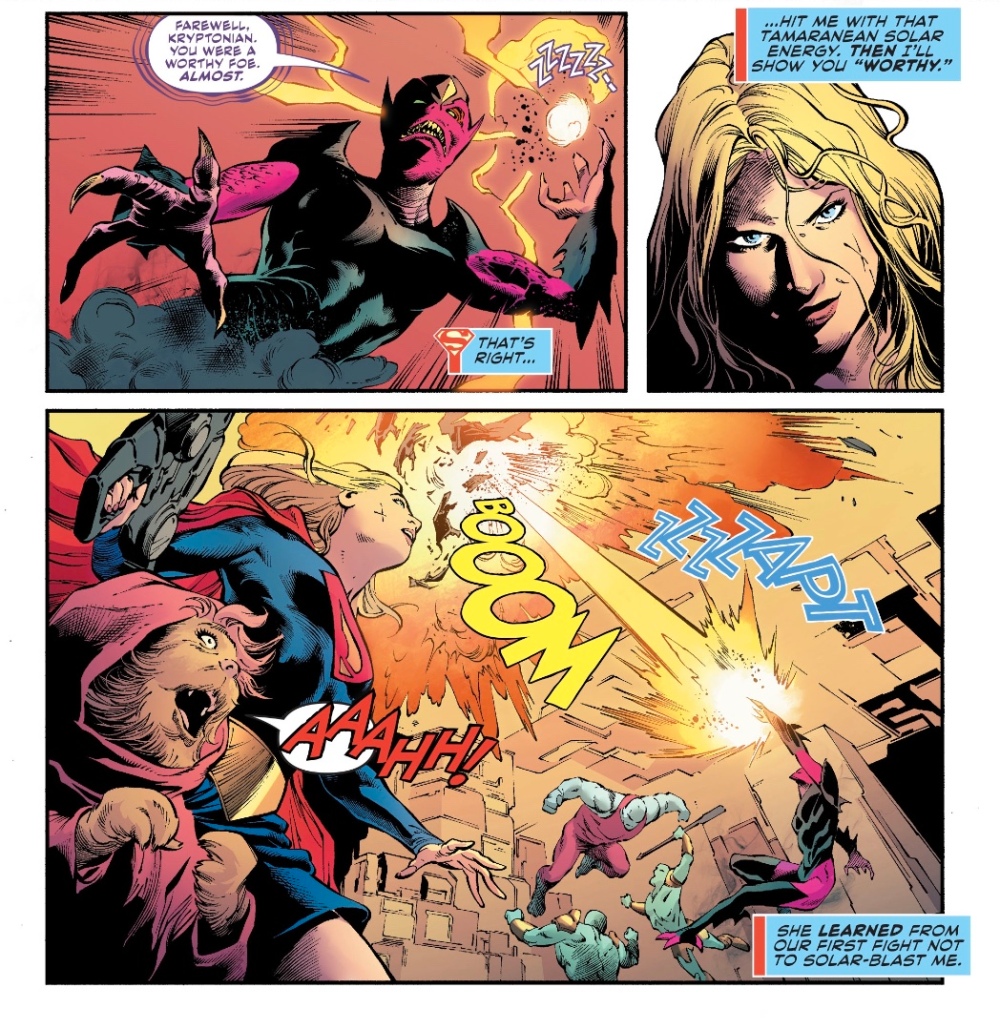 With her powers almost at zero, Supergirl is having to use regular weaponry. Tragically, she soon learns that she can’t save everyone.

After something of a break from the Rogol Zaar quest storyline last issue, the truth of Krypton’s destruction is back on Kara’s mind. Which is as it should be… if she doesn’t concentrate on her mission, we’ll never get back to Earth. While I hate a cute kid getting fridged to amp up Supergirl’s emotions, it does lead to a moment which shows that, actually, she won’t be consumed by vengeance.

We also get answers as to the resurrection of three dead Omega Men, and it makes sense given what we’ve seen in the last couple of issues. Plus, Rogol Zaar’s axe makes the scene, providing a moment of temptation for Kara.

I smiled at the revelation that Znd’r Kol is the adopted son of… actually, I can’t remember her name, but she’s been linked to Rogol Zaar and the end of Krypton. Writer Marc Andreyko doesn’t bother with any kind of recap panel, or introduction of characters, apparently assuming anyone reading this has been reading from the start; a great way to ensure you don’t get many new readers. Anyway, while he was inserted into Kara’s life as a spy – I guessed this on his first appearance , which is why I’m Smuggity Smug of Smugitton – he remains the stand-up guy we’ve seen, trying to convince his mother that being Kryptonian doesn’t equate to being bad.

I cringed, though, at Kara’s suspicions that her father played a part in Krypton’s death – enough with sullying the El Brothers’ reputation, already!

The cover shows a battle-enraged Kara, and there was consternation among some Supergirl fans at the idea she might take to lethal action. Happily, despite a brief axe-linked berserker rage, she doesn’t.

Unhappily, the quest storyline goes on. And on. There’s no end in sight, no immediate prospect of Supergirl returning to Earth. There have been some good moments, but I’ve had enough of Kara in outer space for now, I want her back among her own supporting cast, fighting her own enemies. I can do without the cosmic savagery, and while it’s good to see Kara assert her best side, this is nothing new, it’s the most fundamental part of her character – Supergirl cares, and she doesn’t kill.

In the hands of penciller Eduardo Pansica, inker Julio Ferreira and colourist FCO Plascencia, this issue looks pretty good. Kara looks a tad older than usual, but not off-puttingly so, while the storytelling is solid, the action nicely played out. But a pox on Pansica for making Canon Fodder Kid so darn cute! My favourite page is the final one, a creepy cliffhanger that’s almost lovely in its grotesquerie. 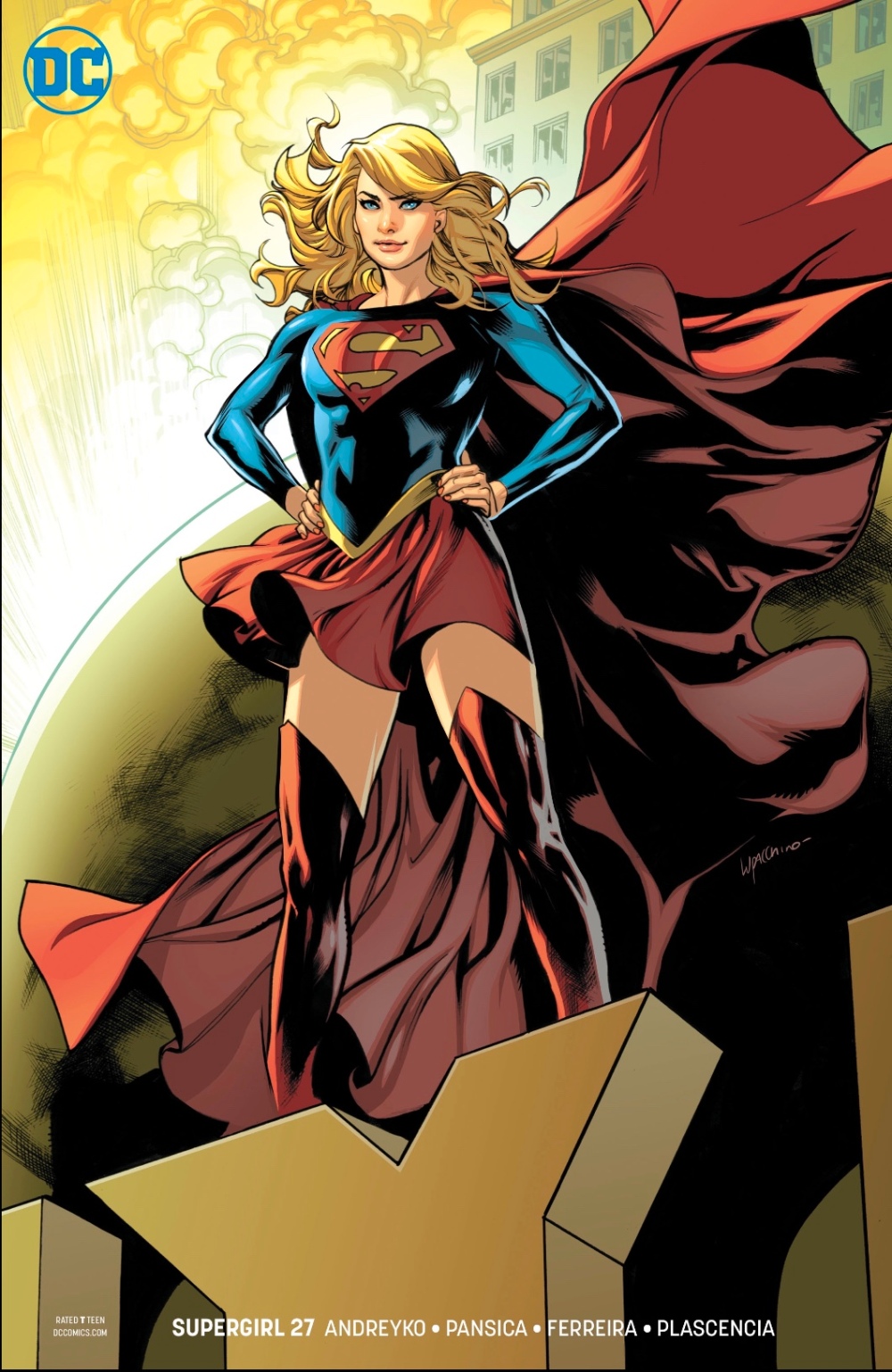 Artist Yanick Paquette’s cover illustration, coloured by Nathan Fairbairn, is well done but it isn’t at all the Kara I want to see, and I can’t imagine ‘featuring the Omega Men’ shifting many extra copies. The variant by artist Emanuela Lupacchino and colourist Dave McCaig, though…that’s my Kara. Could we have a story to go with that pic please – why is Supergirl at the Daily Planet?

A decent issue, this still had me wishing I was reading some other Supergirl shenanigans. It’s time for Kara to fly home.