It’s Clark Kent’s first day in Metropolis and he’s getting a real buzz from being in the big city of his dreams.

Little by little, the sheen comes off. First, the great apartment he’s found online turns out to be a bug hotel. Then he finds the city is being hit by a bombing campaign, with hundreds of people killed in an attack on one of the Daily Planet’s rival newspapers. Terrorists are demanding big money to not murder more citizens. As he begins to investigate, Clark makes rookie errors. 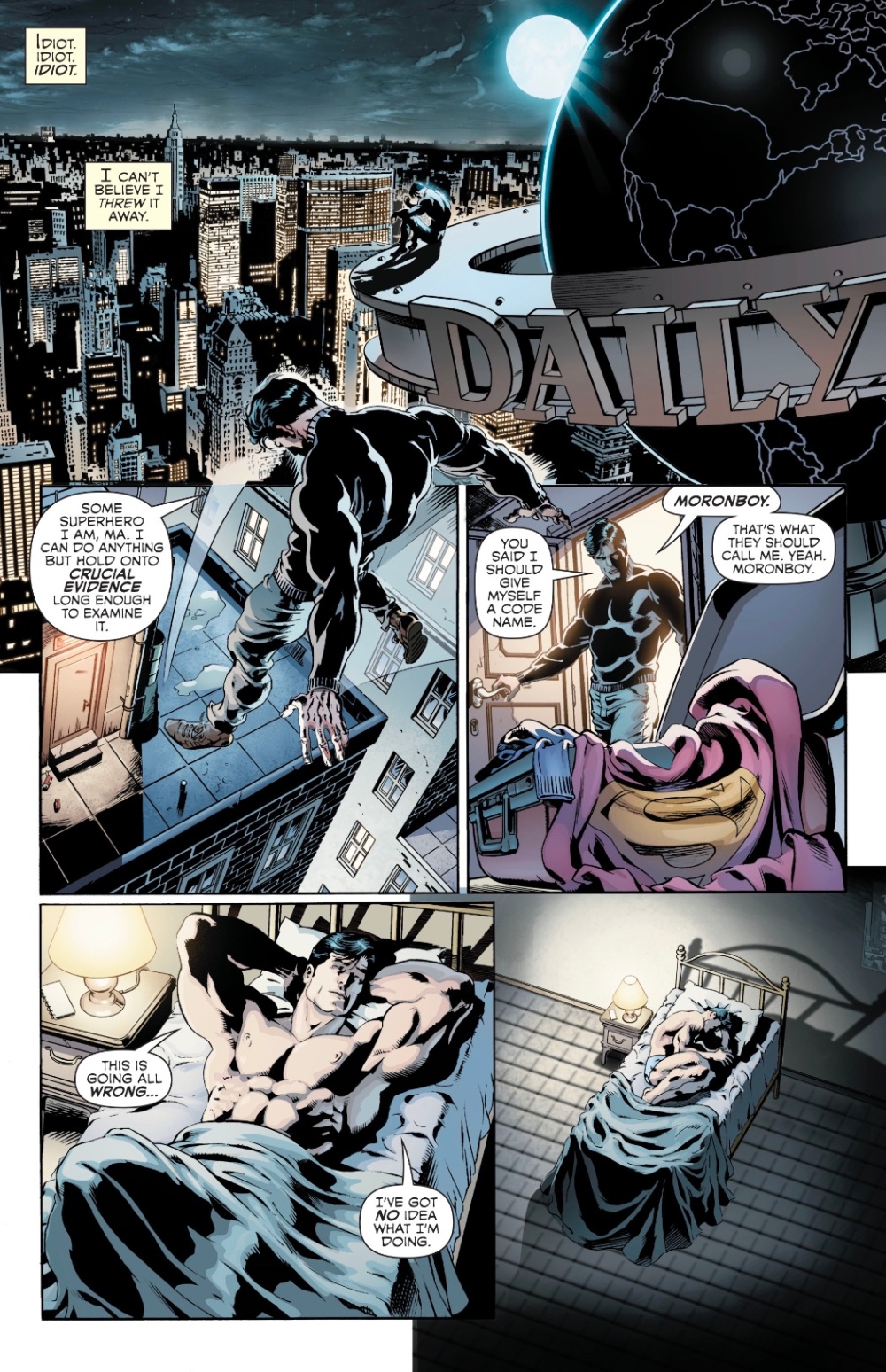 There is a ray of sunshine, though, in one of the reporters he comes across.

Originally intended for DC’s old Superman Confidential series, but shelved when that book was cancelled, Marv Wolfman and Claudio Castellini’s Man and Superman is finally published as one nice fat comic book. And I’m very glad it has been because this is a rock solid look at Superman’s early years, as he learns about the world outside Smallville, his powers and, most of all, himself. He’s having to put aside the certainties of small-town life and learn how to operate in a fast-moving Metropolis where you can’t assume everyone is your friend.

Clark does make some new pals, though, as he takes a cleaning job to pay the bills while trying to get a break in journalism.

There’s a lovely naturalism to the conversations that speaks to Wolfman’s decades of writing comic books. There’s nothing stilted here, nothing expository – it’s just a bunch of decent, everyday guys holding out the hand of friendship to someone they don’t realise is also an immigrant. Wolfman’s adding texture to Clark’s world while saying something about the American dream.

Wolfman knows Superman’s world – he did a superb job writing Action Comics and Adventures of Superman, pre- and post-Crisis, and I feel really comfortable with his Clark Kent… not that things are cosy and predictable, Wolfman does show us a few new colours to Clark’s personality, such as his botching of the investigation, and allied worries about being up to the jobs of hero and investigative journalist. Wolfman also does what barely anyone who ever writes reporters in comics manages – makes Clark’s writing sound decent rather than hackneyed and super-self conscious… too often the Daily Planet seems filled with nothing but cheesey first-person editorials. Similarly, Lois notices people’s syntactic tics, a thing reporters do tend to do. I really like that this is a Clark who doesn’t want to be around journalists to pick up on incidents which could use his assistance – that would make little sense in a world of multiple news sources. Nope, he has a vocation.

It’s awhile until we properly meet Lois Lane; until the final page of chapter two, she’s either seen from behind, or her face is cast in unconvincing shadow. It’s unnecessary – we all know what she looks like – and a little annoying. Once she’s properly on panel, though, Wolfman and Castellini’s girl reporter is stellar – sharp, sassy, the reporter every journalist wants to be. Within moments of sitting down for the first time with Clark she’s noticing that his act doesn’t quite add up. And while this does share some story territory with John Byrne’s post-Crisis revamp, this Lois is far from a bitch, meaning Clark falling for her isn’t some weird masochism deal.

Gruff editor Perry White, too, is on excellent form, though I have no idea why he keeps exclaiming ‘Caesar’s ghost!’ without the ‘great’. Jimmy, too, is fun, and we even get a cameo from Bibbo, bartending in the Ace o’ Clubs pub he eventually buys. Ma and Pa Kent appear mainly in flashback, imparting the homespun wisdom that never gets old.

As for Lex, he’s on classic form.

There’s conflict, both action-packed and character based, but there are no super villains in this comic – it doesn’t need them. It has a man learning to be a hero, a dynamic supporting cast and one of the best depictions of Metropolis I can remember.

As drawn by Castellini and coloured by Hi-Fi, the city really is a teeming Metropolis, not just a backdrop for super-exploits that may as well be canvas – I can understand why Clark is so excited to be here, and why Lois, Jimmy and Perry stay. The people look terrific too, there’s a nice Bronze Age feel to the art, as if Castellini is working from the classic José Luis García-López Seventies DC style guide. Castellini has a real knack for drawing the chaos of the explosions which rock Metropolis, capturing the people’s panic. I appreciate how much effort he puts into drawing the folds of clothes, something to which too few artists pay attention (mind, the sweater he has Clark in is male stripper-tight – it’s no wonder Lois comments on his physique). He also understands hair, just look at this!

And while we don’t see Superman flying through Metropolis in costume, Castellini does a fine job of showing the future superhero’s moves, with Hi-Fi’s colours completing the effect via judicious application of reds and blues. Lex, too, wears his defining colours, purple and green. Letterer Tom Orzechowski brings a nice touch to Clark’s narrative boxes with typewriter keyboard-style drop caps at the start of each one.

One thing I don’t like is the chapter titles – ‘In Which He Leaves Smallville As A Boy’; ‘In Which He Asks The Question That Will Change His Life’ and so on. They’re weirdly stuffy, and I always get irked by the US newspaper habit of upper casing words within a sentence… I wondered if they were taking off something in George Bernard Shaw’s Man and Superman, from which this storyline borrows its title, but apparently not. Ah well, it’s a small thing.

Another little niggle is Lois’ hair. Changing from brown to black partway through the last chapter. I wonder what happened there.

That cover is wonderful, cleverly capturing the book’s concept. Mind, much as I love the telescopic Superman logo, I rather wish it wasn’t in the way of the artwork – something more discreet would have showcased it better. There’s also a stellar contents page, with a negative streetview of Metropolis; Castellini, or someone in DC’s production department? Whoever did it deserves praise.

In an introduction, Wolfman tells us that he’s very proud of this book. He should be, it’s an always engaging, throughly entertaining standalone looking at a little-seen time in Superman’s life with an intelligent eye, and Wolfman, Castellini and co find a new way to tell us who Superman is.