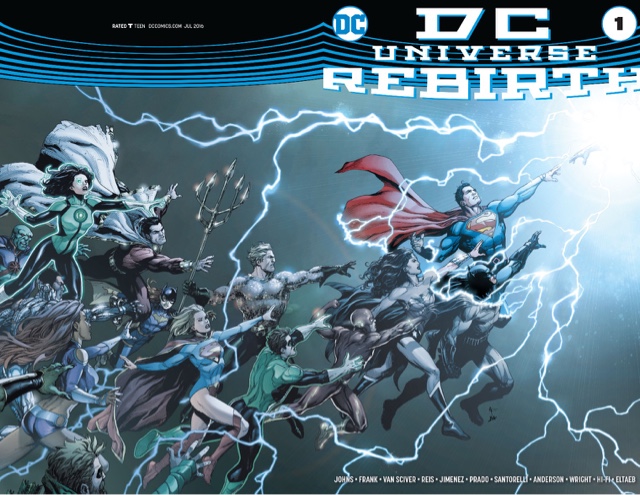 My name is Martin Gray. I’m the fastest blogger alive. Well, usually. An 80-page giant containing 62 pages of story takes a little longer to review than you average 32pp book. And DC Rebirth has so much story, so much to chew over.
The headline, of course, is that this comic by writer Geoff Johns and a handpicked team artistic partners brings back some things that were lost with 2011’s New 52 continuity reset – the original Wally West, and the importance of legacy. Publicity tells us that upcoming is the return of the classic Justice Society of America, while a short sequence announces that the Legion of Super-Heroes isn’t far away.
And I could not be happier. I’m happy to give the New 52 Wally a chance, but couldn’t stop missing the Silver Age kid who not only took on his mentor’s role, but surpassed him in many ways. As of this issue, the red-headed Wally looks to be back for good, but a brilliantly simple bit of real-world thinking ensures there’s room for the new kid too. 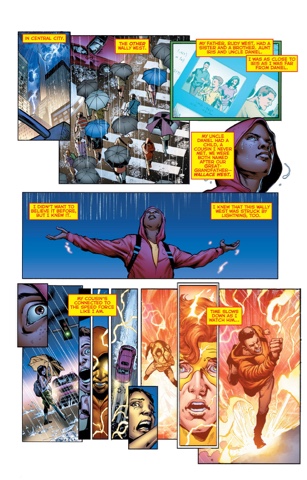 It seems African-American Wally was around all along, it’s just that we’d never met him – and older Wally gives his cousin his blessing, which may persuade a few holdouts to relax. Heck, once upon a time DC had two Hal Jordans, so why not a couple of Wallace Wests?
It’s pretty apparent who our unseen narrator is a nine-panel page or so into this utterly absorbing love letter to DC’s superheroes, and we soon see it’s Wally, trapped by the Speed Force and ‘Flashpointed’ into a younger body and the second Kid Flash costume. 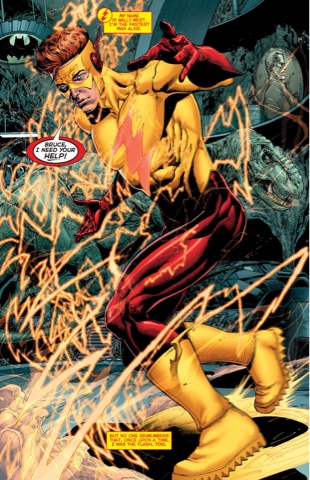 Even more than the visual, the narration announces the comeback of one of DC’s greatest heroes – that ‘My name is Wally West…’ bit began every story for years, and its return sent chills down my spine. And that’s why the start of this review echoes it in such a self-aggrandising way… I’m excited, is all.
The story set-up is hugely intriguing – Wally has been lost to the Speed Force since Barry broke and remade the world during the Flashpoint event. The recent Darkseid war has given him a chance to make fleeting visits to the new, darker Earth, to try to convince someone, anyone, that Tim has been been stolen from them. Along the way, we get not only the state of the universe, but glimpses of changes and revelations. 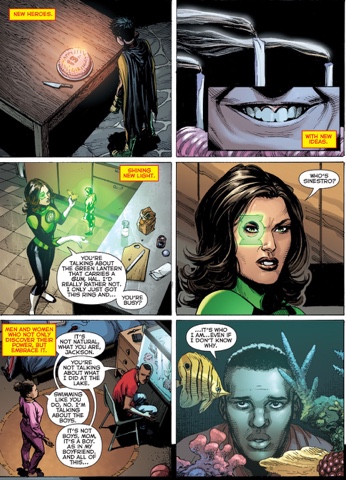 Other things that excite me in what is the best Johns script in years include:
A reference to the Joker – or rather, a Joker – operating in Civic City, once home to the JSA.
Mera and Aquaman getting engaged, announcing the end of DC’s ban on married superheroes.
The implication that the insane five-year timeline is going to be stretched to ten, or perhaps even 15 years… now Batman can fit all those Robins in nicely.
The setting-up of the new Blue Beetle book and restoration of Ryan Choi to an Atom role – I wonder if he’ll return to Hong Kong and meet the new Chinese Superman.
Post-Crisis Lois and Clark’s belief that the New 52 Superman will likely return, a nod to the pre-Crisis notion that events repeated on parallel worlds.
Johns’ use of previously seeded, apparently forgotten plot points, such as the Thomas Wayne note from Flashpoint, which seems to have been a trapdoor to escape the New 52 all along; and from his Superman run, Mr Oz, so annoyingly enigmatic he makes the Phantom Stranger seem like Wikipedia. 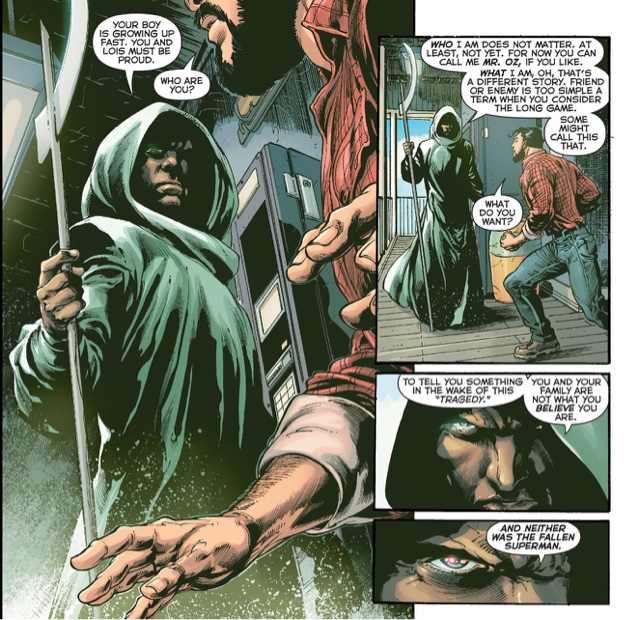 The notion of Wonder Woman having a male twin brother – a Wonder Twin! Give it five years and we’ll hear about Nubia.
Ted Kord’s joie de vivre. 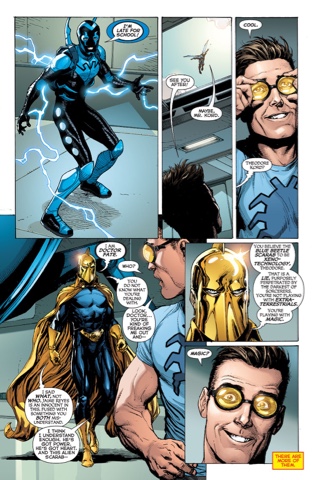 The Hand That Stole Time – a classic DC Crisis trope from Krona onwards.
The mystery of who else is lost in time – Wally certainly feels someone, but can’t connect with them.
Poor old Flashpoint patsy Pandora getting a moment to shine. And splatter.
Dinah Lance and Oliver Queen feeling a connection as they meet for the first time at the site of Superman’s death – the erasure of their wonderfully complex relationship was one of the big minus points of the last continuity. 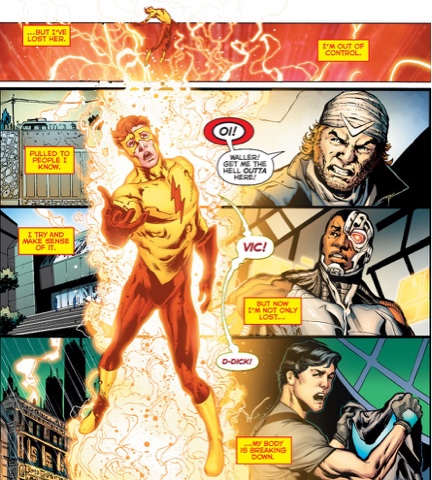 The visual callbacks to Barry Allen’s fate in Crisis on Infinite Earths as a weaker and weaker Wally appears before his old friends, teasing us that he’s come back only to die.
How Wally escapes the Speed Force.
Wally’s notion that some cosmic force stole years from the heroes, making relationships impossible, to weaken them… for what?
There’s so much to intrigue and excite in DC Rebirth. The massive story point I’ve not yet addressed – that the DC Universe may have been created by Dr Manhattan of Watchmen – could prove a negative for me. Leave it as a possibility and move on, and I’m good with that; I can immediately delete it from my head canon because I don’t much like the idea of one superhero universe outranking another. I hated the ending of St Elsewhere and I don’t want the DCU – whatever that means in a given week – to go down the same snowglobe road. All I wanted this special to do was rebalance characters and relationships, re-emphasise the value of legacy… and move on. I don’t want loads of links to Watchmen – I read that series as it came out, appreciated its craft more than I enjoyed it, and never read it again. Leave Watchmen as its own thing.
Given that the epilogue is firmly set in the world of Watchmen, I must commend illustrators Gary Frank, Ivan Reis and Joe Prado, and colourists Hi-Fi and Brad Anderson for getting the page layouts, art style and colouring right. Heck, even the lettering morphs to the style of the seminal series, thanks to Nick Napolitano. It’s clever stuff, done well, but I hope this is it. Let the reader choose to believe Dr Manhattan and Adrian Veidt are discussing the story we’ve just read, or let them decide they’re considering a soap opera about tedious pirates, or whatever, and just happen to be hanging around outside a DCU tale.
We should be so lucky.
Still, this issue does so much good work that I’m optimistic there are fun times to come. And it’s beautiful, courtesy of the aforementioned artists along with co-illustrators Ethan Van Sciver and Phil Jimenez, inker Matt Santorelli and colourists Jason Wright and Gabe Eltaeb. My favourite moments includ that very nicely coiffed and bespectacled Ted Kord, the tragedy of old man Johnny and the emotion of Wally and Barry’s reunion.
There are two covers to this issue, the washed-out main piece by Frank and Anderson, and a brighter illustration from Reis, Prado and Sinclair. It seems the message is, as of DC Rebirth, the futures bright. 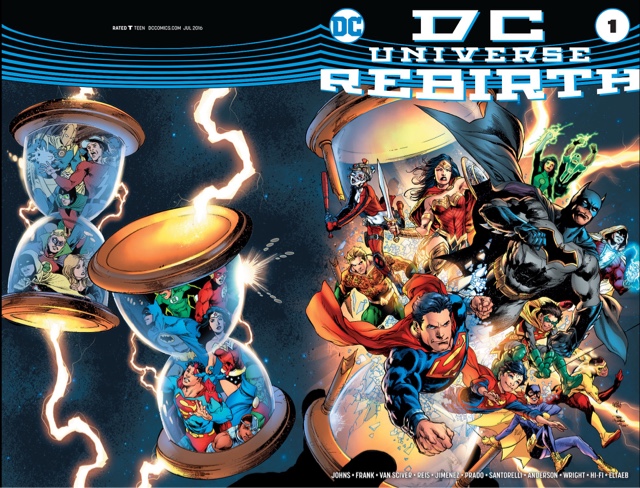