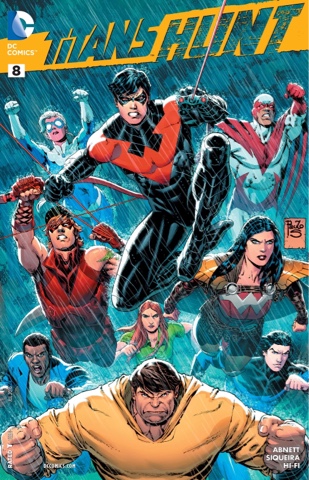 And so it begins. And ends. Shortly after Titans Hunt began, apparently a sop to longtime fans, it was announced that it would herald the coming DC Rebirth linewide makeover. Which is rather neat, given that Titan Mal Duncan is once more in his old identity of Herald, and a key cog in the plan of mini-series villain Mr Twister to… well, just what was unclear until this conclusion.

Here we learn that he wants to invite something over from another reality, something massive and scary and very… very hungry. Previous issues have been spent gathering the Titans of pre-Flashpoint continuity together, reminding them of who they once were, and that they had been a team. Now, everyone is gathered atop a twisted tower, not knowing if in facing Mr Twister, they’re giving him exactly what he wants – enough control over them to blast reality wide open. 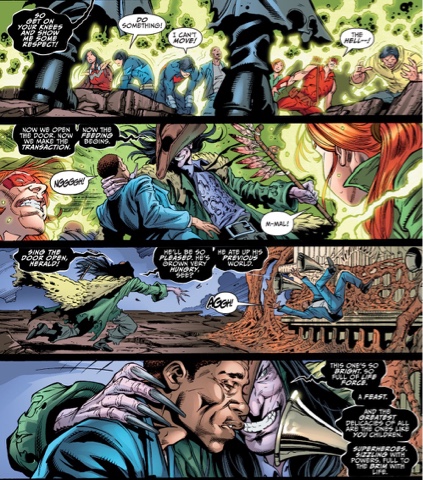 Dan Abnett once again demonstrates what a smart, elegant writer he is as he uses the fact that all but one of the heroes has a new name, maybe even personality, to further the story. The changes mean Mr Twister can’t control them as easily as he’d like – names being power in fantastic fiction. All but one – we have Nightwing, Donna Troy, Gnark, Lilith, Arsenal, Hawk, Dove, Karen & Mal Duncan and Garth and one of these has form as a traitor, whether intentional or as a dupe… and knowing that really ups the drama.
It’s not exactly spoiling things to note that the Titans triumph, but one mystery besides the identity of the big beast remains… 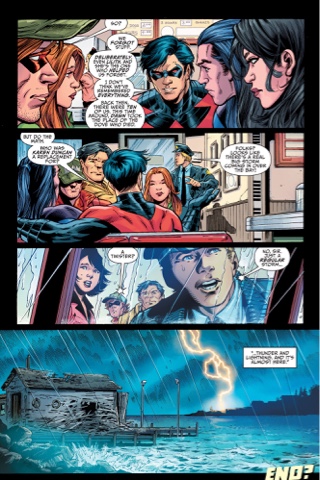 Ha, a flash of lightning. I’ve speculated that this issue would end with a lead-in to next week’s DC Rebirth 80pp giant showing the return of Wally West, Kid Flash turned adult speedster. And while he doesn’t appear, we’re very much in ‘…yet’ territory. Heck, alongside her new power blast, Karen is moving pretty fast – is a Speed Force-trapped Wally lending her power? DC have promoted Rebirth as being about returning legacy to the DC Universe, and who embodies legacy more than Wally West, the first kid hero to replace his mentor?
Whatever happens, this has been a hugely enjoyably read, bringing back some of the characters I grew up with and restoring them to something akin to their previous selves – the Garth and Donna we have by the end of this series, for example, are very different from the savage warriors at commencement. That’s less due to gradual character development as returning memories allowing for renewed relationships; and there’s a strong likelihood that in remembering who they were, the Titans are ushering in yet another reboot of the DC Universe. I’m more than fine with all of that, let the majority of the post-Flashpoint fade as the classic DC Universe reasserts itself.
Paul Pelletier steps into the penciller’s role this issue and, with the aid of inkers Ray McCarthy and Wayne Faucher, keeps the book’s tone consistent with earlier instalments. The character acting and storytelling are great, with Mr Twister seriously intense and Gnark’s pie-eating class a treat. 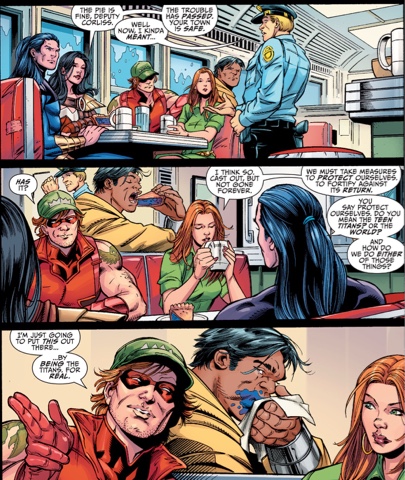 Paulo Siqueira, who’s drawn much of this series, makes his presence felt with a corker of a cover, coloured by interior contributor Hi-Fi.
I’m looking forward to DC Rebirth hugely and, after that, seeing where the Titans go next. Who says you can’t go home again?