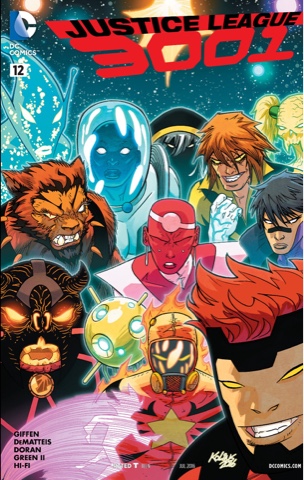 The Justice League are fighting Eclipso and his Legion of Doom in a desperate bid to take back the universe from Lady Styx. Moments from the excellently choreographed battle alternate with key vignettes showing the relationship between twins Terri and Terry Magnus. We see how, little by little, the League is ditching the dysfunctional to become a tight team, one possibly able to reclaim the planetary system. We see how Teri was always tormented by the inevitable casualties as she and her brother tried to turn 31st-century volunteers into new versions of the 21st-century Justice League. 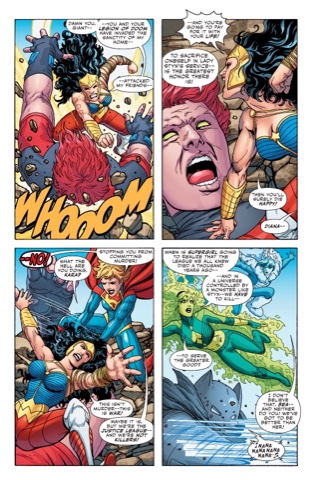 The dialogue from JM DeMatteis over Keith Giffen’s plot sizzles as ever, the artwork by Colleen Doran, Timothy Green II is great, Scott Kolins gifts us a lovely cover.
As issues of JL3001 go, this is really rather good. The character dynamics are fun, the action is exhilarating, there’s a revelation about Lady Styx… but as a final issue?
It’s disappointing. Again and again I’ve marvelled, as my friend Anj of Supergirl Comic Box Commentary has worried, that too many subplots were being introduced when cancellation had been confirmed. I had faith. They’ll tie pretty much everything up, said I.
Sadly not. There’s a final page which gives a couple of the characters leeway to show up in the DC Rebirth revamp, and a good metafictive gag with Larfleeze and G’Nort, but as for winding the story up, it doesn’t happen.
I don’t need everything in a neat bow, I can stand a few loose ends; today’s loose end is tomorrow’s story engine. But I do want to see the main plotline, the war the League has been fighting, conclude. As it is, our heroines are left fighting for their lives as Lady Styx watches from across the universe. Subplots such as Guy Gardner’s personality problems, Supergirl’s mission, the whereabouts of Beetle and Booster… it would have been nice to have one of ’em wrapped up.
Giving so much of the final issue over to a spotlight on two characters is a strange use of comics real estate. Yes, there’s some theme mirroring as the twins, several years ago, and the JL members ‘today’ philosophise over ends justifying the means.
And there’s a moment with the new Superman that could be the creators smartly commenting on DC’s dumping of the classic suit. 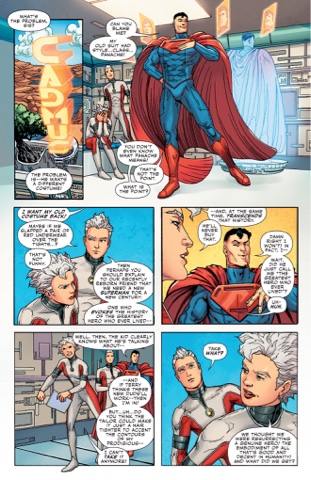 But come on guys, you’ve gotten us invested in the main story. Don’t deepen it, finish it.
I hope I don’t sound too much the whiny, over-entitled fanboy. I’ve loved this series, am sad it’s not continuing and am a big fan of all the creators. It’s just, well, I wanted to be able to close the book on Supergirl, Wonder Woman, Flash, Batgirl, Ice and Fire. Know that their struggles paid off, that the universe was free and the people able to rebuild. Even seeing them on the final cover would’ve been something.
Time to start campaigning for a special, methinks. I want to see these characters get the happy ending they deserve. Or at least a happy For Now. Hey, this is comics.
So, farewell Justice League 3001. Thanks to Giffen, DeMatteis, Howard Porter, Scott Kolins, Colleen Doran and everyone who’s worked on this book, one of DC’s hidden gems of the last few years.