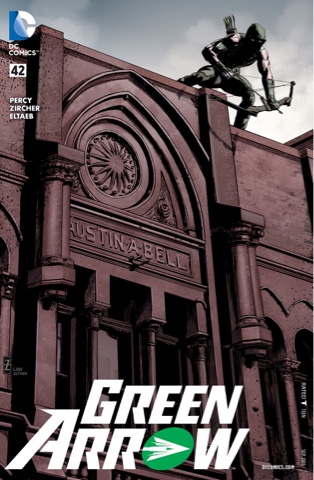 People are falling to their deaths in Seattle. From mid-air. The police and Green Arrow are baffled, with the only clues being chatter on the streets about ‘the Night Birds’, and an albino man caught on camera near the scene of one killing.
That’s a very short summation of the contents of last issue, the first by the new core creative team of writer Benjamin Percy and artist Patrick Zircher. This month – the middle of a three-parter – begins with another body being discovered. While Ollie and sparky sister Emiko patch up a massive great pooch the hero has rescued from a dogfighting ring, the police are taking delivery of their new weapon in the war on crime – the Panopticon. 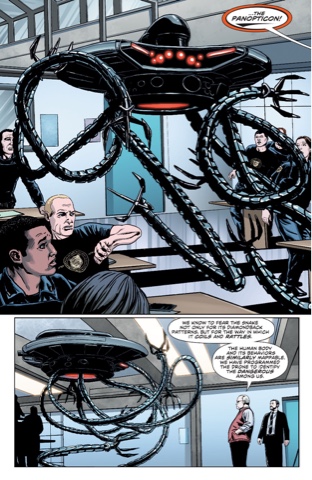 Inspired by Jeremy Bentham’s prison concept and, it seems, Robocop, the Panopticon project has been greenlit because of the mysterious murders. Not at all coincidentally, the evil-looking drones can fly and have the tendrils necessary to grab people off the streets …
Last issue’s opening chapter was excellent, and this one is even better, as Percy and Zircher present a superbly placed, suspenseful drama. Ollie is a nuanced figure, realising he’s been so distracted by his vigilante activities that he’s taken his eye off the ball of Queen Industries – guess who backed the project? When he sees the heavy-handed way the Panopticons are ‘keeping the streets safe’, he realises they must be stopped. We see him growing before our eyes. 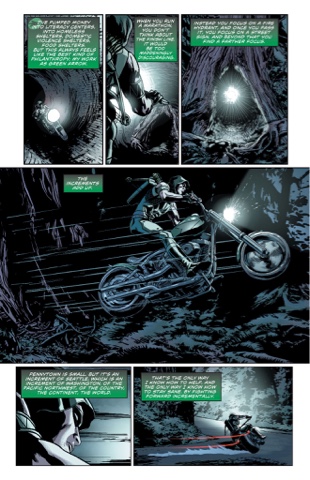 Without being heavy handed, the oversight idea behind the drones ties in nicely with Ollie’s musings last time on the thousands of windows surrounding his home. And an even better carry-over is George, half-dog, half-wolf, all sweetheart. 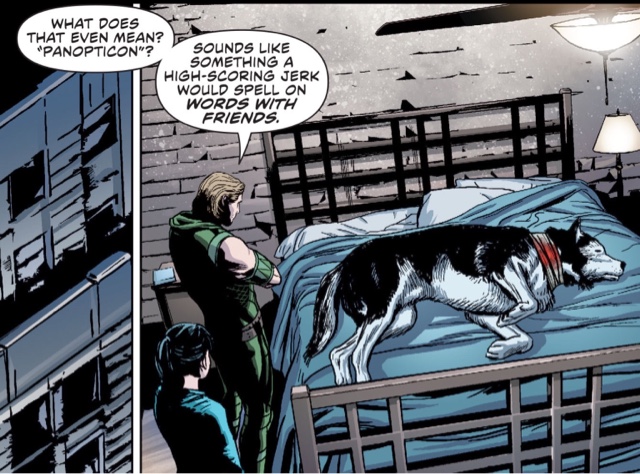 Zircher draws him as excellently as he draws everyone and everything else – the naturalistic, inky art meshes wonderfully with the writing, the two combining to produce a compelling urban mystery. I particularly like the design of the Panopticon, and how Zircher connects it – helped by the stirring colours of Gabe Eltaeb – to the pet spider of Ollie’s business manager, Broderick.
Zircher and Eltaeb also provide the nicely composed, richly executed cover – I looked up that building, well, it’s so darn prominent – and it’s a real structure. Interestingly. The variant cover, by Craig Rosseau, is a hoot – take a look. 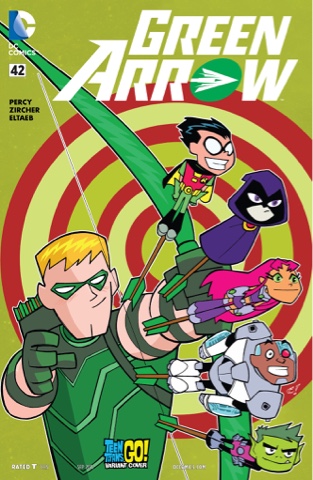 If next issue’s conclusion matches the standard of the rest of ‘The Night Birds’, we’ll have had a tight, taut tale pointing to a great future for Green Arrow. And George.