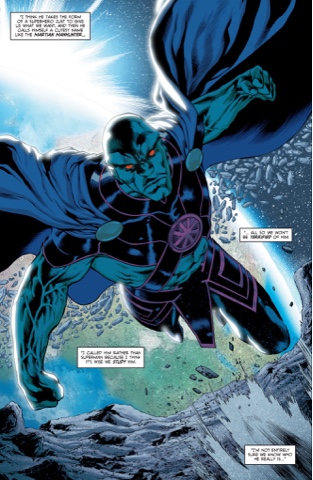 J’onn J’onnz is called in to find out what’s happened to three astronauts, incommunicado on the moon. He finds them murdered by a White Martian, but – perhaps to avoid panic, perhaps down to shame – he lies to NASA, claiming they were the victims of an airlock accident. And NASA is lying to J’onn, not letting him know they want to keep him close in order to study him
So it seems one theme of the coming series from Rob Williams will be trust. I’m not delighted at the idea of J’onn’s trustworthiness being in question – I like him as enigmatic alien, but not one whose benevolence is in doubt. Still, this preview is well enough done that I’ll give the book a chance – Williams’s script is taut, while the art by Eddy Barrows and Eber Ferreira is strong and expressive. And heck, I want Martian Manhunter to succeed so badly – he’s my big green mate. 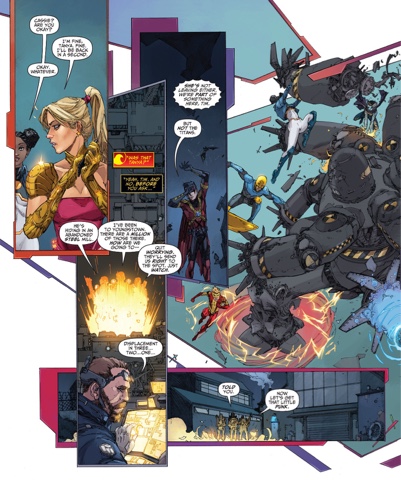 Teen Titans
There’s no relaunch coming, so it makes sense that writer Will Pfeifer and artist Kenneth Rocafort use their eight pages to recap recent events. Superboy has reappeared and is on the run for apparently murdering people. Red Robin and most of the Titans are up for protecting their friend, refusing to believe the worst of him. Wonder Girl and Power Girl have allied with a new Star Labs team of Titans to help track Superboy down.
It’s an efficient primer, a little dull for those of us who have been reading, and very wordy, but it does show off Rocafort’s visuals, Pfeifer’s team dynamics and the series tone and direction. It may grab a few new readers, if they, like me, aren’t utterly sick of New 52 Kon El’s constantly shifting psyche … as far as I’m concerned, Wonder Girl is right to be wary. There’s loyalty, and there’s foolhardiness, and Tim, being little more than a mini-Batman these days, needs to curb his arrogance. Maybe you don’t know best, kiddo.
Good grief, I’m engaged here. 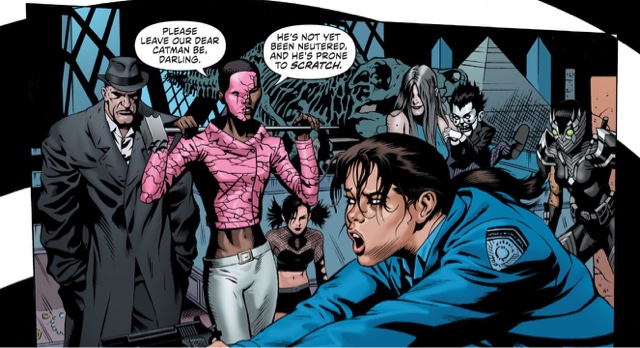 Secret Six
The villains united series returned last winter for a couple of issues, then vanished for months due to personal matters of a member of the creative team, for which, sympathies. But it’s coming back in June, and writer Gail Simone and artist Dale Eaglesham really whet my appetite with this pacy yarn which sees the team involved in a Gotham jewel heist. The real test here is seeing, for the first time, how the new guys work together, how they look.
And the answer on both counts is, great. Simone is a master of the tight tale, sketching in her characters speedily and with style, while Eaglesham places subtly drawn protagonists and supporting players in big impact illustrations – quite a trick. There’s no way I’m missing an issue of this book. 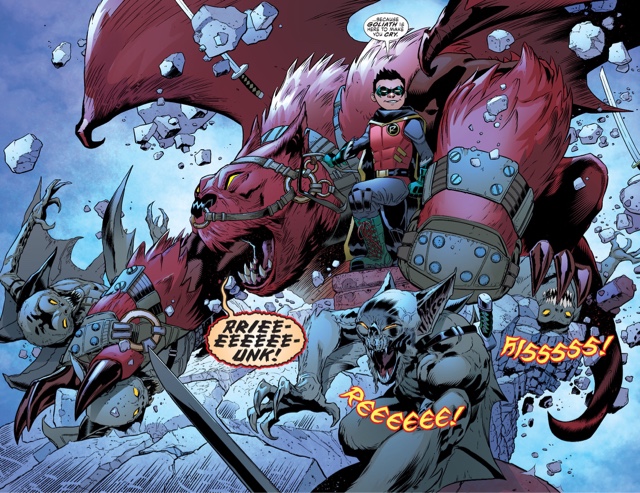 Robin, Son of Batman
Damian Wayne is in China to return a manuscript to a monastery, but a bunch of ninja man-bats want it for themselves. Luckily, Damian has brought a man-bat of his own. And boy, is it big.
This short is basically one big fight, but along the way Patrick Gleason – now writing as well as drawing Grant Morrison’s bratty Boy Wonder – shows that Damo is as competent as he is cocky. As for his pal Goliath, I want one. Gleason’s script is better than I was expecting, DC not being great at finding illustrators who can pull double duty. And his art just gets better every time – his work is big and clever, with inker Mick Gray also deserving kudos for his liquid lines. Damian gets an ongoing series next month and I’m sold. 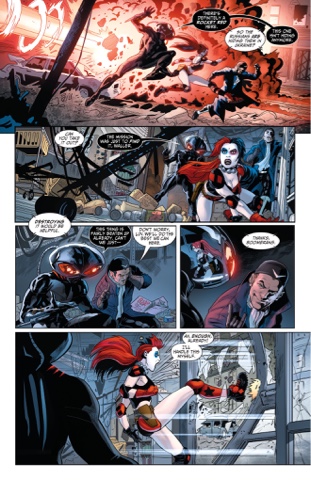 Suicide Squad
I’m not truly grabbed by the current iteration of Suicide Squad – too much action, not enough intrigue. But this short by series writer Sean Ryan does a good job of showing the current team off, and hinting at better things to come. The bulk of the story is Captain Boomerand, Harley Quinn and co in the Ukraine, fighting a giant robot, and it’s rather fun. Philippe Briones’ art is more DC’s New 52 house style than breakaway visuals, but it’s attractive and tells the story well. I’m not sure this has convinced me to stay with the book, but if this is the kind of thing you like, you’ll certainly like this. As they say. 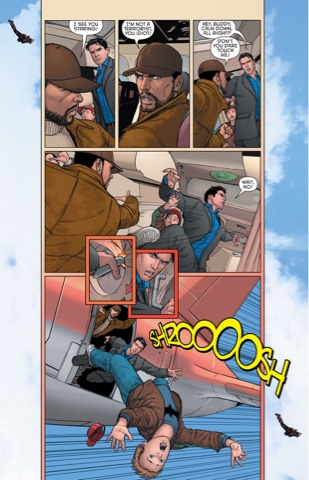 Grayson
Original Boy Wonder Dick Grayson continues his spy shenanigans with Spyral in a clever wee fable that rewards the attention you give it. It’s basically Dick falling through the sky in pursuit of a young boy who’s in big trouble, but the whys and wherefores are questions I want answered – especially when we learn who the kid is.
The storyline that powered the first eight issues of Grayson looked to be wrapped up in haste to hit the Convergence break, but writers Tom King and Tim Seeley show they can get on the proverbial bike again. The leads and their roles are quickly established and the burst of action kicks off the new storyline. Mikel Janin, as usual, draws the heck out of things, making Dick’s new world expansive and enthralling. 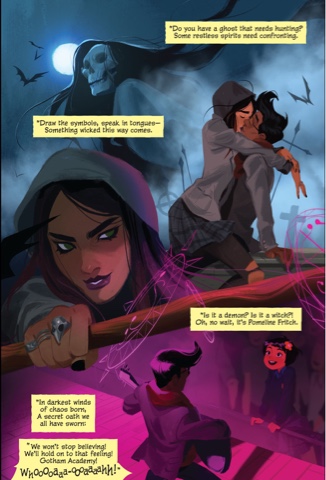 Gotham Academy
One of the DC launches whose critical and commercial success prompted the company’s current attempts at diversity, Gotham Academy is a ridiculously good-looking, bonkers-fun book. And that’s exemplified by this short, which sees hyper-enthusiastic student Maps penning an ode to her friends and their adventures together. It’s informative, intriguing, and some of it even scans.
I’m pretty sure Becky Cloonan and Brenden Fletcher could have managed poetic perfection, but they’re writing in character here, and Mags is a great one, the star of Gotham Acdemy. But she has competition coming up as Damian Wayne enrols …
Before that, lap up the sumptuous art of Mingjue Helen Chen, who takes the style established by Karl Kerschl and runs with it, offering up a slew of beautiful, characterful pages. Wonderful. 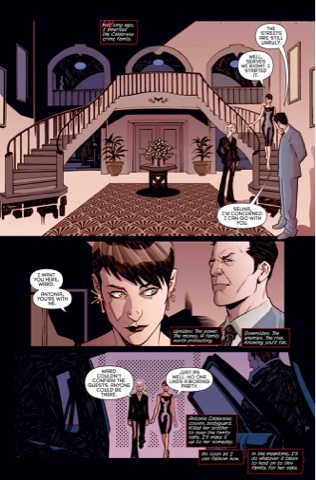 Catwoman
I reviewed the first issue of Genevieve Valentine’s Catwoman run and found its mob queen theme wasn’t for me – I’m just not interested in the Godfather genre. That said, Valentine does an excellent job with this recap, using a party as the vehicle to lay out the story and introduce the dramatis personae. I don’t like what she’s done to Selina, but by cracky, Valentine knows what she’s doing – the new Catwoman certainly has purpose and charisma. And David Messina does a splendid job of making Selina sexy without over-sexualising her, as well as capturing the world of goodfellas and gags. So, still not for me, but you may love it. 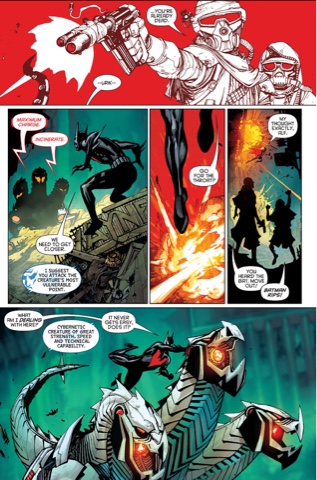 Batman Beyond
Remember Futures End, the weekly DC book that spent almost a year vamping, before ending pretty much where it began, in a horrific future of heroes turned evil robotszzzz? One of the big changes was Batman Beyond Terry McGinnin dying and being replaced by former Red Robin Tim Drake. But not the currently canonical one, an older Tim from a future that will likely never happen. And here he’s gone further into the future to take up Terry’s war on a world gone mad. His only friend? An AI name Alfred.
So far, so so unpromising, and the Futures End debacle engenders a certain amount of ill will. Dan Jurgens and Bernard Chang make for a great writer artist team – I just wish I had a smidgen of interest in their subject. I don’t like cybernetic-filled dark futures, can’t stand heroes being guided by computers and have no interest in any version of Batman Beyond. I can appreciate that this is a pretty stylish take on a future Batman – Chang’s visuals, as coloured by Marcelo Maiolo, are gorgeous, and Jurgens is a terrific craftsman – but it’s not my cup of tea. I hope it finds its audience. 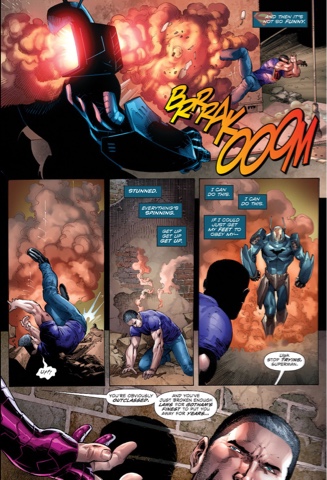 Batman/Superman
Talking of lack of interest, I was so not into this that I almost forgot to include it. OK, so it’s the Truth storyline Superman – underpowered, buzz cut – meeting brand new cyber-Batman – Commissioner Gordon, stupid. Because it’s Greg Pak writing and Ardian Syaf and Vicente Cifuentes on art, though, there’s much to commend it – a pithy script and eye-popping visuals. But it’s Superman away from Metropolis and riding a motorcycle, and Super-Marine Jim Gordon being an idiot. Oh, and we get Lex Luthor demonstrating that if Superman can have silly gloves, he can have sillier ones. So, thanks for the preview, DC, when is it over?