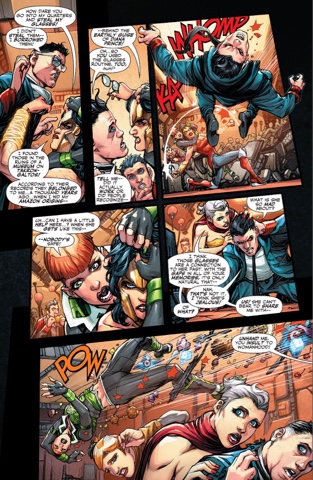 Justice League 3001
If you’ve not been reading Justice League 3000, here’s a nifty chance to see what the book offers – a new twist on the World’s Greatest Super-Heroes with a splendid mix of laughs and conflict. But behind the fireworks JM DeMatteis emotionally layers his future versions of Wonder Woman, Batman and the rest of the gang – mostly DNA-altered 31st-century humans with memory overlays. Here, it’s a year since we left our heroes, and a few members ‘enjoy’ a quiet dinner, Superman experiments with a secret identity and we meet their new Green Lantern, a gal named Guy. With a sharp script from DeMatteis and terrifically characterful work from Howard Porter – keep an eye out for the R2D2 sight gags – this is a preview that has me dying for the series’s June relaunch. 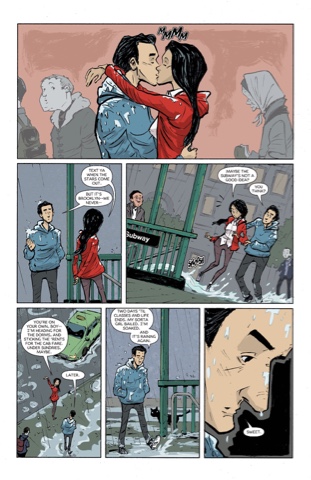 Dr Fate
The announcement of this series, with a brand new Dr Fate, came as a surprise, given the mantle was bestowed on a new Earth 2 hero a couple of years back. But that’s not important right now. What is, is how great a tease this eight-pager by Paul Levitz, on script, and Sonny Liew, on full-colour art, is.
The rain is teeming down in Brooklyn, and medical student-to-be Khalid ‘Kent’ Nassour just wants to get across town to meet his ‘sorta girl’. His cab driver pop ferries him to meet Shaya, who likes him loads, and is charming, but is totally focused on her own studies to become a neurosurgeon. So the date lasts about two minutes, and Khalid is reduced to talking to his cat, whom he believes has somehow followed him across the city. What he doesn’t know is that Puck is a god incarnate, and he’s been talking to a fellow Egyptian deity – likely Anubis – about the possibility that life on Earth is about to come to an end. The preview ends with Khalid popping into a museum to buy a present for Shaya in the gift shop. On the way, a statue beckons him to take a glowing, golden helmet…
This is just wonderful. Levitz, having learned his craft in the days DC had back-ups, knows how to write a sharp short story; we get the set-up, meet the characters and are given a cliffhanger in a perfectly organic manner. The dialogue is naturalistic for the New Yorkers, and creepily grand for the gods. I’m looking forward to spending time with Khalid, though he loses a few points for telling his ‘cat’ to make his own way back home in the rain – did he never see Breakfast at Tiffany’s?
I can see comparisons being made with new Ms Marvel Kamala Khan, in that Khalid’s father is an immigrant, hailing from Egypt, but his mother is apparently US-born and bred, so there’s a difference right there. I can see the mixed heritage proving as rich a source of stories as Kamala’s Pakistani Muslim background.
Sonny Liew is a fine cartoonist, giving real character to his people and presenting a convincing Brooklyn. He also does really great rain. And animal gods. And sneaks triffids into scenes. I cannot wait to see how he draws Khalid as Dr Fate. 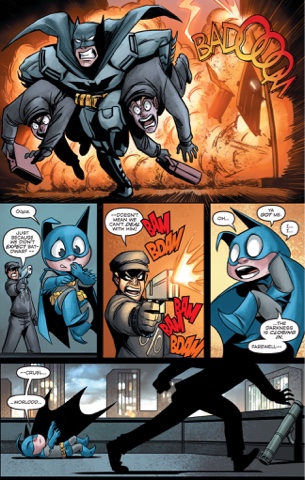 Bat-Mite
It’s the dysfunctional debut of Bat-Mite as the magical imp previews his upcoming mini-series. As ever, he just wants to help Batman, and as ever, Batman just wants him to go away – well, he causes as much trouble as he does good. Really, he just needs a bit of direction, but spurned after basically saving Batman’s Bat-ass, he decides on a mission – to help the amateur crimefighters less talented than his hero. You know, Wonder Woman, Flash …
I can’t remember the last time I saw Dan Jurgens write a humour issue, though I’m sure he did it once or twice in his gratifyingly long run on the Superman books. He certainly shows he has the chops here, delivering a pacy, amusing script that shunts Bat-Mite a little more into Ambush Bug territory than usual, with his meta-comments. Colour me intrigued.
Corin Howell’s bouncy art suits the script – he’s able to make a serious-looking Caped Crusader and a blimpy wee imp inhabit the same page without things getting too incongruous. Batman’s tussle with hoods has the dynamism of an episode of the Animated Series, with seriously tooth-popping moments. I wasn’t sure if this series would be for me, but I’m hooked. 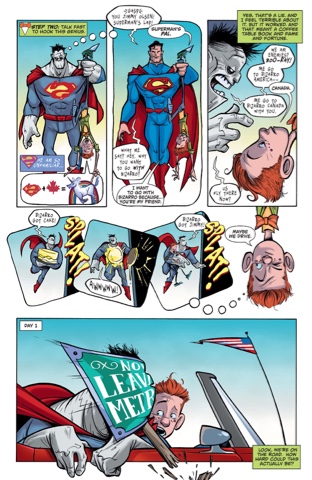 Bizarro
Are good humour comics like buses at the new DC? Because another’s come along, in the shape of Bizarro, well-meaning Super-goof of Metropolis. Rocketed from the Bizarro World by an ungrateful populace, he only wants to do bad, er, good – but he’s making everyone’s lives a misery. Only one man can save the day … Jimmy Olsen? How? By driving the big blue lug to ‘Bizarro-America’, aka Canada. What did the Canadians ever do to Jimmy? I have no idea, but he reckons he can get a coffee table book out of it.
This preview is just ace – writer Heath Corson sets things firmly in the DC Universe, mining the likes of planet Mogo for gags and giving us a delightfully dumb Bizarro. And artist Gustavo Duarte … wow, where has he been hiding? Brazil and Dark Horse Comics, apparently, but Mad Magazine should throw big money at him – his caricatures of Jimmy, Clark and the wider citizenry of Metropolis have the sensibility of the likes of Angelo Torres but a charm all their own. It’s beautiful work, sympathetically coloured by Pete Pantazis and imaginatively lettered by Tom Napolitano – even Jimmy’s signature narrative box is a winner. I don’t know if Corson and Duarte came as a package, but they mesh marvellously, and their Bizarro mini should be a smash. 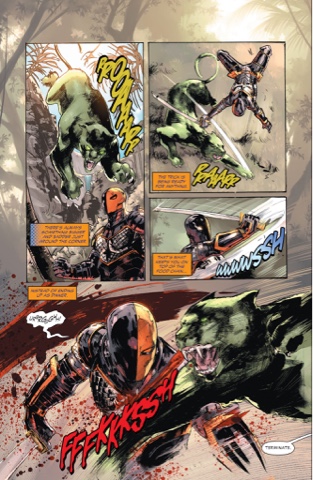 Deathstroke
And here’s another humour comic as Tony S Daniel and James Bonny satirise the worst excesses of the New 52 by giving us a badass villain spouting clunky expository dialogue through gritted teeth as he’s put through his paces by someone named the Spanish Inquisitor.
No one expects the Spanish Inquisitor.
Then there’s a mercenary band called the Dead Bastards, and Deathstroke getting his arm ripped off by Beast Boy, kinda sorta, this really is a hoot … what’s that? It’s meant to be a serious comic book?
Oh. Anyway, the art by Peter Nguyen and colourist Tomeu Morey is fine, it matches the script and, er, I’ll get me coat… 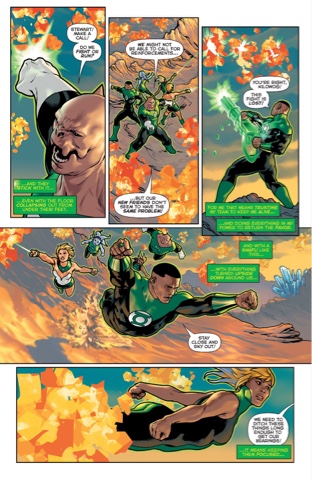 Green Lantern: The Lost Army
Here’s a new Green Lantern book, starring John Stewart, Arisia, Kilowog and a couple of characters who are new to me, Xrill-Vrek and Two-Six. They wake up on an unknown planet, their rings can’t tell them where they are, they’re attacked by nebulous energy things, they do surprisingly badly considering they wield the most powerful weapon in the universe and they meet an unexpected figure. Cullen Bunn’s narration has John pondering on what makes a good leader – I’d say, someone who remembers they could try flying into space to get their bearings.
Jesus Saiz makes everything look great, and I assume the not-especially threatening nature of the energy blobs is because the script called for same. It’s a shame, as a creepy alien or 50 might explain why a bunch of GLs are so panicky all of a sudden. I mean, drill sergeant Kilowog asking John if they should run from a fight?
Given that Saiz’s full colour art is so nice, and Bunn entertained me with his Fearless Defenders at Marvel, I’ll try the debut issue, but if it’s as unengaging as this preview, I’m out. 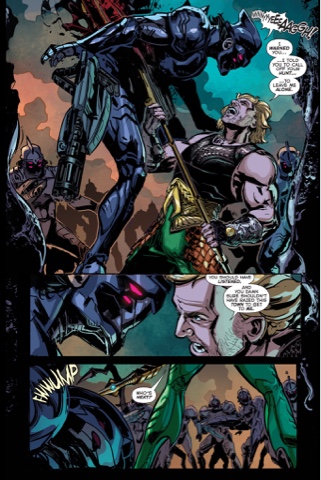 Aquaman
Here’s Bunn again, making his Aquaman debut and ensuring I won’t be trying his first issue. We’ve just had a delightful run from Jeff Parker and Paul Pelletier which saw Aquaman settling into his duties as Atlantean king, fighting monsters and learning more about his heritage with great good humour and his beloved Mera as his partner.
Here we have Arthur on the run from his own people, a small town on the surface world burnt to the ground by murderous Atlanteans, our hero gutting a grunt, apparently killing his other pursuers and Mera revealed as the ruler who’s sent her lackeys after Arthur.
It’s horrible stuff, an erasing of what the Aquaman book had become. I’m not against bold new directions, but this is a 180 degree heel turn, far less palatable than the Deathstroke tale I was mocking back there.
Heck, Parker’s run ended with Aquaman finally getting physical proof he’s the rightful ruler of Atlantis, but here he’s spoken of as if still an outsider. And if he’s so worried about land dwellers getting caught in his fight, why did he hide there in the first place?
Then there’s the art by the talented Trevor McCarthy, which matches the script splendidly – dark to the point of depression. As for Aquaman’s new costume, in the sea, no one can hear you laugh – let’s hope so, anyway as it’s like a cross between Metamorpho and Ultra the Multi-Alien.
Looks like I’ll be waving goodbye to Aquaman for awhile. 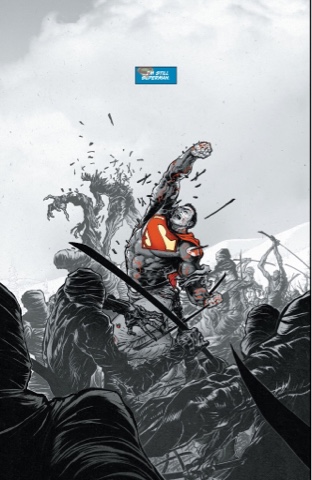 Action Comics
I’m extremely pleased writer Greg Pak and Aaron Kuder are staying with Action Comics, because they’ve been producing the consistently best Superman book for some time. They’ve a real synergy, so much so that now, rather than their individual credits, they share the term ‘storytellers’. Here we get a sharp teaser of Superman’s upcoming status quo – depowered and feeling less than comfortable with his situation. We join a hunted Superman making his way to the Fortress of Solitude, where he expects to be able to hide, rest and find aid. What happens when he arrives is shocking, and very intriguing.
Pak’s narration married to Kuder’s images – as ever, coloured by the excellent Wil Quintana and lettered by the redoubtable Steve Wands – makes for a sterling package, an intense superhero short that has me looking forward to the upcoming Truth storyline (Lois betrays Superman’s secret identity, everyone wants a piece of him) a little more. I’d prefer PaKuder (as no one is calling them) to be left alone to weave their own adventures, but I’m assured that however the rest of the storyline goes, the Action Comics chapters will be more than solid. 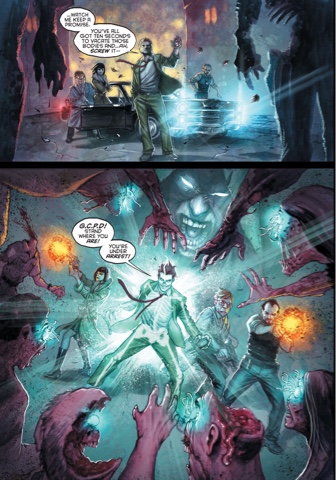 Gotham By Midnight
The Midnight Shift of Gotham City Police Department gets a reintroduction here, as an undead plague hits town. We get the set-up and a character roll call as ludicrous new Batman Jim Gordon begs Jim Corrigan – aka the Spectre, but I doubt Tinman knows that – for assistance. Ray Fawkes writes with efficient urgency, Juan Ferrayra illustrates with sumptuous style and I can only hope this preview gives the excellent Gotham By Midnight the audience it deserves. Just without Tinman. 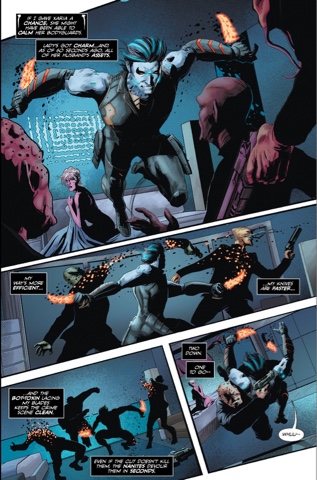 Lobo
Cosmic bounty hunter Lobo is deep in assassin territory here, slaughtering a space mob leader after shagging his wife, then letting her take the fall. This is lurid, cynical and may find an audience, but it’s certainly not me. Writer Cullen Bunn seems to be casting Lobo as a romantic anti-hero, with a weary private eye-style narration. But while the classic, over-the-top Lobo did manage to be, if not a nice guy, a compelling one, DC’s current Lobo – humourless, self-regarding – is someone I’d pay money to avoid. That’s not to say Bunn’s script isn’t decent – it’s well-crafted and likely has the tone DC wants – but it’s just not my cup of tea. The always welcome Cliff Richards produces some of the best work I’ve seen from him, with appealing sci-fi settings and characters, and Mike Atiyeh tones things terrifically … I’d just rather see them draw something other than Nudey McSlash.
So, another mixed bag of Sneak Peeks, but some definite winners.  The good stuff looks great, the bad stuff … bad. But that’s comics.