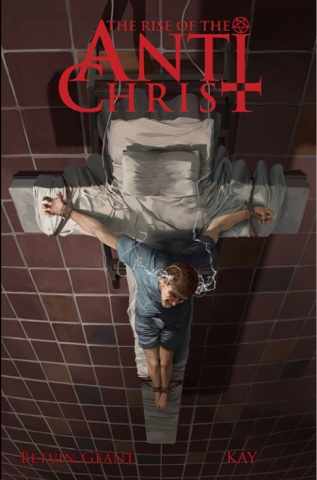 Michael is in a psychiatric hospital, apparently suffering from religious mania. His head is filled with darker passages of the bible, tales of retribution and the end times. During an especially intense moment, he tears out one of his eyes, putting him on a path that leads to an electroconvulsive therapy session that climaxes in a way no one could have foreseen.

The title of this series from Ether Comics provides a hint as to where things are going; the appearance of an antichrist is well-trodden territory, but then so is the story of a neophyte superhero and they’re prime fodder for contemporary revisits. So it is that writer Betvin Géant and artist Kay set off on a journey to explore the intersection between horror and mental disorder. 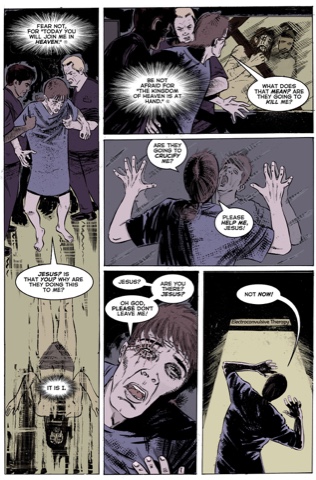 There’s certainly horrific imagery in this first issue – along with the eye-ripping scene, there’s the ECT moment, and more. The most disturbing aspect, however, is Michael’s troubled mind, filled with all the scary bits of the bible and none of the loving passages, and a bit of Martin Luther thrown in for good measure. The blame for Michael’s mental state may go to his father, whom we see in a flashback acting out the Good Book’s bad bits with far too much relish, but then again, his son does ask for them. A further flashback shows he’s had some bad times in recent years, but we don’t really get to know Michael well enough for me to empathise with him. He’s a creepy kid who grows up a bit of a zealot, unable to deal with the world – a prime candidate for disaster. While publicity material talks of Michael being ‘killed for his beliefs’, if that’s what the comic shows, it’s more a matter of him being targeted by dark forces than persecuted – the only torment is from himself, with everyone at the hospital wanting to help him.

The hospital, by the way, is called Golgotha, while a staff member is named Jezebel – this comic is a little on the nose at times. Still, it’s intriguing, with Géant’s script and Kay’s art producing the occasional very effective moment as imaginative use is made of the comics page.

I found the heavy quoting of biblical text tiresome, yet the creators seem very keen on this aspect of the book, devoting a page of backmatter to sources … no further reading for me, thanks. Hopefully subsequent issues will lessen, if not ditch altogether, the quotations, because people who quote Scripture all day long aren’t fun to spend time with. With luck, the set-up is done and Géant and Kay will take us on a wild and woolly ride – given that Jesus Christ was killed by the people he’d come to save, logic says the antichrist would be feted.

2 thoughts on “The Rise of the Antichrist #1 review”