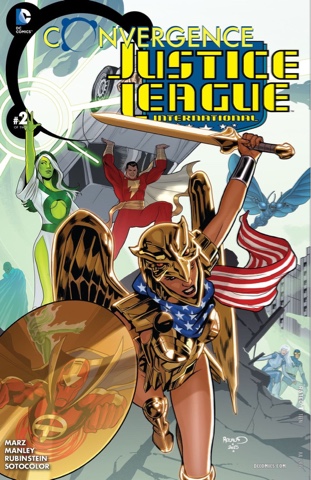 There’s not much reason to bwah-ha-ha as we join the members of Justice League International in the wrap-up of their Convergence tie-in. Trapped on a patchwork world, ordered to fight the battle-hardened Kingdom Come Justice League, they’re the underdogs. 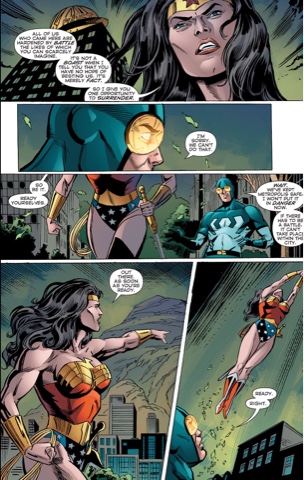 But as it happens, the heroes of two worlds don’t rush into battle; their leaders, Blue Beetle and Wonder Woman, talk. Ted Kord wants to team up against cosmic ‘jail warden’ Telos. Diana hopes Ted’s League will simply surrender. Neither will budge, so battle commences. And one side wins – but not before two Blue Beetles fight side-by-side against the drones of Telos. 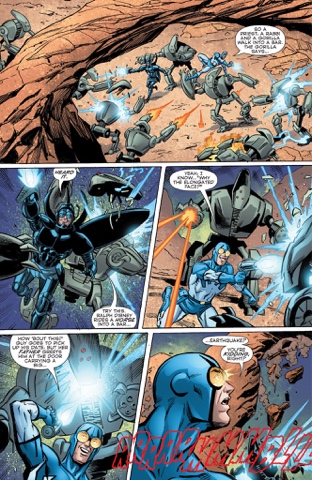 This sequence is my favourite in a book full of cracking moments. Writer Ron Marz could have played this lazy, filling the pages with one big fight. But he chooses to put characterisation to the fore, refusing to betray the characters of participants on either side. So even though the Kingdom Come League trounces the JLI, they’re careful not to hurt anyone significantly. And while the Teds understand the gravitas of the situation, that doesn’t mean there’s no room for a gag or two, standing up the story’s title, Punchline. And a sequence in which Ted must lift a massive weight off Ted (perhaps a nod to the legendary Amazing Spider-Man #33, starring another Steve Ditko character) shows the never-say-die pluck of the man/men.
What’s more. Marz gives us an ending that is simply perfect. 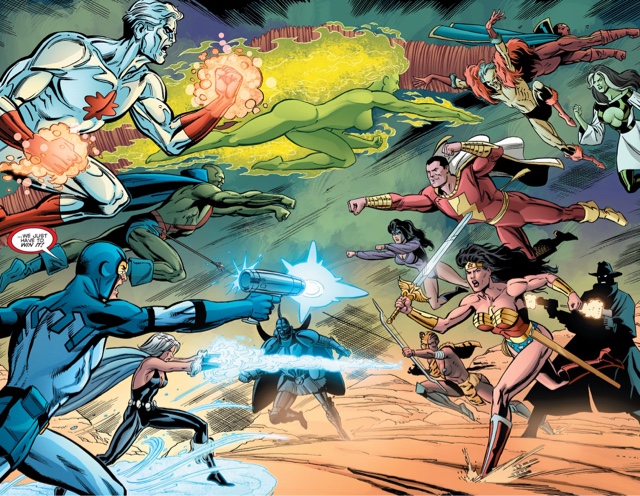 Mike Manley pencils with verve, gifting us page after page of cheery superhero art, with the final image being the best of all. His Wonder Woman is more Earth One than Kingdom Come, I assume that’s a choice rather than miscommunication, but I’m OK with that – the Diana here chimes nicely with the version I grew up enjoying, the one meant to become the KC Amazon. I can’t see the joins between the two veteran talents – Bret Blevins and Joe Rubinstein – inking alongside Manley, it’s good work all round. And Sotocolor likely deserves some credit, too, for the consistency, as well as the nicely chosen and applied tones. Tom Napolitano lays down the letters, while Paul Renaud’s cover is simply edible.
I don’t know if DC has any plans for Ron Marz, but this micro-series shows why his talent is so missed at the company. Structure, characterisation, action – he knows how a compelling superhero book works, and plays well within a shared universe. I’d be thrilled to see him handling the pre-Flashpoint Ted Kord again, or an entire JLI book, or best of all, having a reunion with Kyle Rayner. For now, I’d like to thank him, and the entire creative team, for a thoroughly engaging pair of issues.