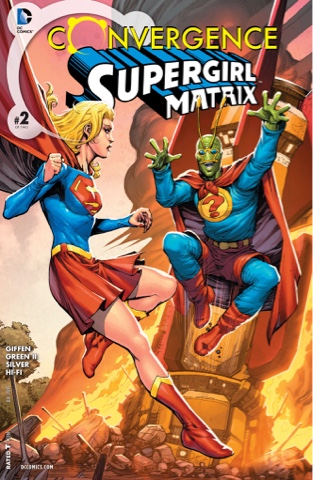 Well, this justifies the entire Convergence event – an actual, laugh-out-loud issue of Ambush Bug. Sure, it’s Supergirl’s name on the cover, and the Matrix Maid of Might gets a good showing, but she’s basically straight woman to the star of the show, Irwin Schwab, teleporting trickster.

Last issue, Mae was tasked by her boss Lex Luthor (it was the Nineties…) with tracking down teleportation technology in a bid to escape the Convergence dome they’re trapped in. Lex was a real stinker, constantly undermining and verbally abusing a woman who could crush him like a bug, and she was putting up with it. Mae fought Earth 6 heroes Lady Quark and Lord Volt, before the tracking veebleftezer given to her by Lex finally led her to someone with teleport tech – Ambush Bug.

This issue begins with Supergirl and the Bug sharing a coffee as Mae picks what pass for his brains about the situation. She’s after something that may help them, he’s telling the former protoplasmic blob she smells like spackle. And from there, the story goes, well, everywhere, as they teleport around the mosaic world of Telos, checking in on various realities. There’s the Post-Great Disaster milieu of Kamandi, the world of the Extremists, the Future’s End landscape, a realm housing DC’s old humour and Henry Boltinoff characters, and 30th-century Metropolis.

Yup, as well as Ambush Bug, writer Keith Giffen revisits another of his greatest hits, the Legion of Super-Heroes, in particular the humorous take showcased in DC Comics Presents (which guest starred a certain Bug) and the Legion of Substitute Heroes Special. The scene in this issue, mind, takes place between the panels of Secret Origins #46, the delightful, touching origin of the Legion Clubhouse, a story not involving, but informed by, Giffen’s occasional silliness.

Some fans hated the daftness of these tales of the Legion, but I loved them, and revisiting that short period made my day – Matter Eater Lad through the lens of Giffen is a wonder to behold. 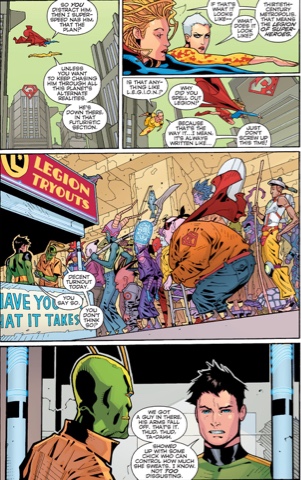 And it’s not like humour was all Giffen did in the years immediately post-Crisis, and that top tier gives us a reference to one of his more serious series, L.E.G.I.O.N. ’89, via the typically humourless Lady Quark.

That’s pretty much the issue, gag after gag, and yet, Giffen being a craftsman as well as an ideas man, he progresses the story, getting Mae back to Lex in a very satisfying scene. I could’ve done without the panel of a blood-spattered Supergirl, but still, Lex is a total scumbag. As a bonus, we also learn which world Ambush Bug hails from…

While Mae is the wall the Bug’s gags bounce off, she’s never the butt of the joke, with Giffen showing how competent she is in her return bout with Lady Quark. 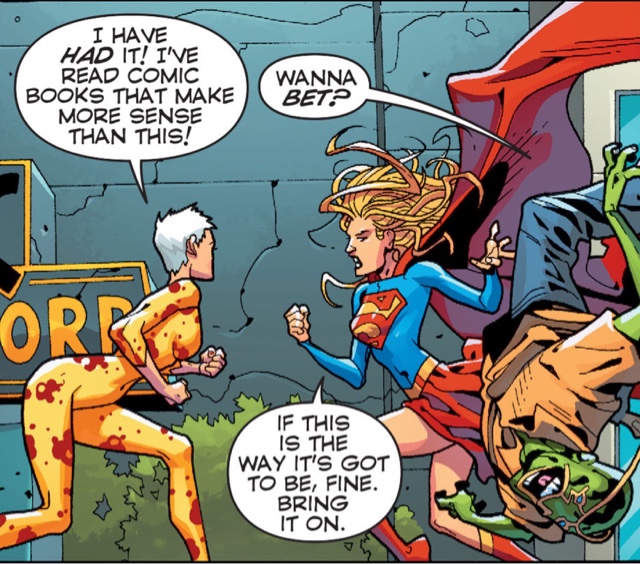 Giffen’s pencilling partner-in-crime from last issue, Timothy Green II, returns and draws a simply superb Ambush Bug. Some of his female poses are a little brokeback – Lady Quark gets totally italicised at one point – but the storytelling and energy complements the script extremely well. 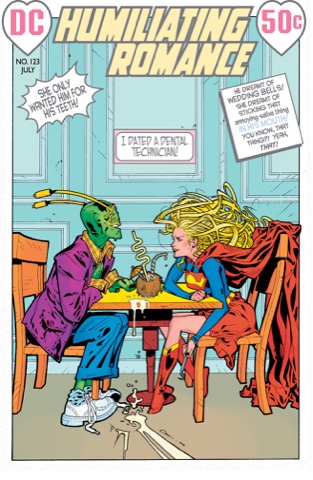 I especially like the adorable pose adopted by the Bug in a very romantic splash page, and the way Mae is holding something under a table – it’s great observational stuff. I was going to say the enjoyably mad way he draws Kara’s hair must be the result of her encounter with electric oaf Lord Volt last time, but looking back, she had it before she even met him. The detailed backgrounds and incidental characters show how much Green was enjoying this assignment, and I’d love to see him teamed with Giffen again. Joseph Silver once more inks with a light, but strong and effective touch, while Hi-Fi’s colours are generally bright and breezy, darkening appropriately in the brief moments of gloom. And Corey Green’s letters are as sharp as you might wish for. All this, and a Howard Porter cover homage to Supergirl’s 1959 debut.

Despite the odd dark moment demanded by the Convergence set-up, this is a hugely fun read, and a reminder of Giffen’s brilliance. And if this is the last we see of Matrix Supergirl, well, she could have done a lot worse.