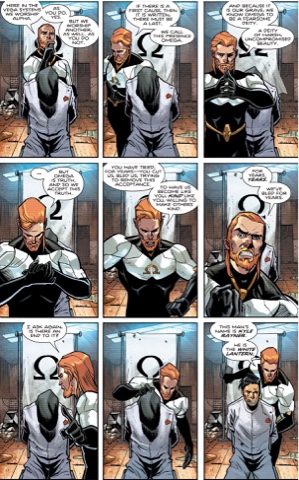 Well, that was disturbing. Green – sorry, White – Lantern Kyle Rayner has apparently been sent to negotiate a treaty between the warring planetary systems of Vega and the Citadel. And for whatever reason, the Omega Men – good guys, in the old days – have captured him and are broadcasting the moments before his (apparent) execution. Writer Tom King and penciller Barnaby Bagenda use the nine-panel grid effectively to amp up the tension, but all I could really think of was the dubious taste of having a superhero comic so closely echo the activities of IS in the real world. I’m just amazed any urge to put Kyle in an orange jumpsuit was resisted. 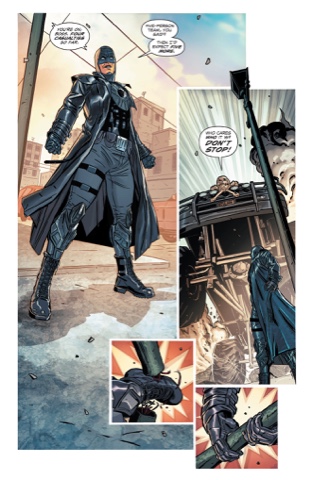 Midnighter
There’s a tiny reflection of IS here too, in the shape of a Je Suis Charlie tee shirt snuck onto a possibly Muslim bystander as Midnighter takes on a bunch of terrorists in Boston. I don’t know why Midnighter is no longer with Apollo, I don’t know why he suddenly has a terrible haircut, but I do know that I enjoyed this imaginative take on Wildstorm’s Batman enormously. Writer Steve Orlando and artist Aco give us a fast-moving, clever, stylishly illustrated preview of a series I’ll certainly be checking out. One thing, though: we get it, Midnighter is gay – dumping some random guy in his bed to make the point is a bit lazy. 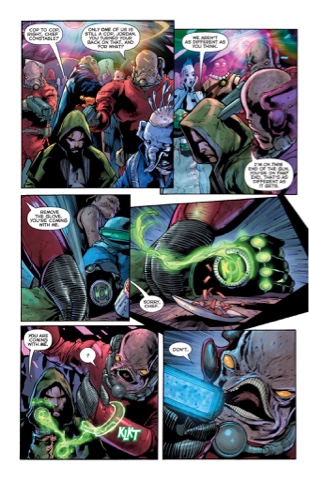 Hal Jordan is a renegade, wanted by law enforcement agencies throughout the universe. He’s stolen a gauntlet from the Corps that apparently acts like a Green Lantern ring and describes himself as a hired gun. He’s rough and tough and wears a trenchcoat and it feels like I’ve fallen through a space warp into the Nineties. Here, Hal defends himself against a policeman trying to strongarm him into custody, and I’m happy to say he acts with restraint and morality. Still, I’m not certain I want to see another run with Hal Jordan on the outs with the rest of the GL Corps – he was redeemed a while ago, can’t he be the shining example of a corpsman he was for so long? Robert Venditti’s script is fine, and the art from Billy Tan and Mark Irwin decent, but I’m not sure this is a Green Lantern book I want to read. 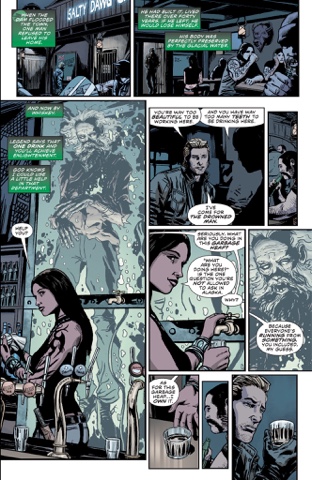 Green Arrow
I’ve not followed Ollie’s book for a couple of years, since it morphed into something akin to the TV show. But Benjamin Percy and Patrick Zircher hook me back in here, with a short showing Ollie on a journey to find himself, taking a break from his responsibilities as an industrialist and a superhero. Alaska is as far as he can go, and it’s here he visits a macabre bar and shows he cannot chat up a woman to save his life. He does save her life, though, from a creepy clown surrounded by sheep. Zircher’s depiction of this scene ensures my dreams tonight will be bad – I mean, a clown AND sheep – while his art in the rest of the teaser is equally effective. Unless Zircher was left to pace the pages himself, Percy’s thoughtful script demands some tiny panels, but the artist comes through, delivering moody, compelling pages. I can’t wait to see how they handle a full-length issue. 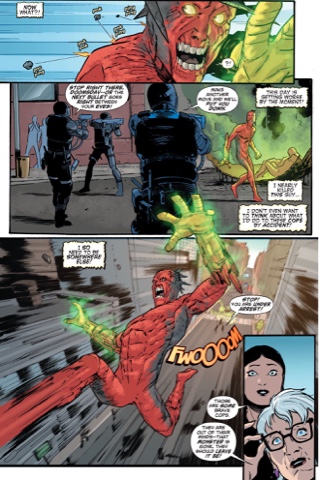 Doomed
I’ve not been looking forward to this at all, writer Scott Lobdell having been a big part of the generally terrible Doomed crossover in the Superman titles awhile back. But whaddya know, I rather enjoyed this. Lobdell gives protagonist Rieser a sympathetic internal narration as he tries to control his new Doomsday form, we meet his supporting cast and check in with minor Metropolis hero Alpha Centurion. Javi Fernandez gives us imaginatively laid out, dynamic artwork, sympathetically coloured by Kyle Ritter. Bring on the series. 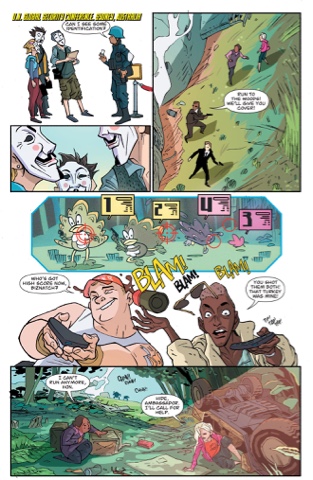 The Seventies concept of a teenager as president of the United States is revived, but this time it’s a young woman rather than a guy. It’s 2036, Beth Ross – see what they did there? – has been elected by Twitter and in this preview she’s on her way to a peace conference as an observer when her plane is downed by insurgents. She saves the day, though I’m not sure precisely how. I like Ben Caldwell’s kinetic pencils, John Lucas inks them well, and writer Mark Lucas obviously has some ideas he’s running with, but this didn’t grab me. I’m probably too old. 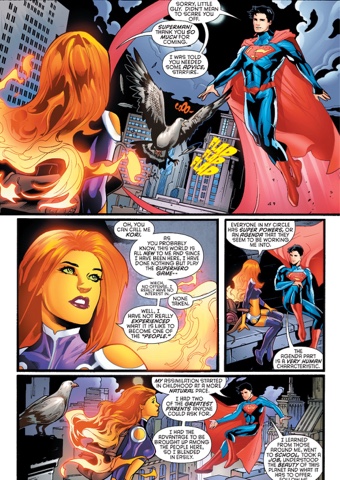 Starfire
I’m still mourning the recent cancellation of Supergirl, but at least we’ll still get to see series artist Emanuela Lupacchino on the new Starfire strip. Which, on the basis of this scene setter, is going to be massive fun. Writers Jimmy Palmiotti and Amanda Conner’s script is smart, breezy, sly and a wonderful primer for anyone who’s not followed Koriand’r New 52 adventures. The first couple of pages feature Kory soliciting advice on where to relocate to from various DCU denizens – including Zatanna and Cheshire – and then it’s an extended, entertaining conversation with Superman. So, confident script, gorgeous art and a refreshing take on a former fan favourite … I feel a subscription coming on. 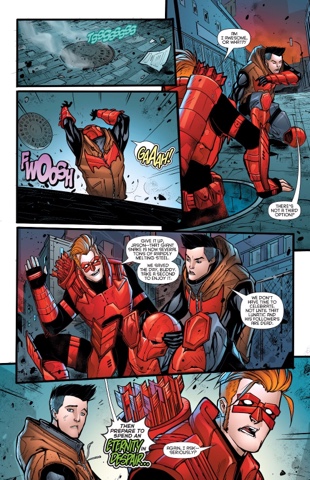 Red Hood/Arsenal
So, with Starfire leaving the Outlaws, Red Hood and Arsenal go solo… er, duo. This opener sees Jason Todd and Roy Harper taking on the hordes of an entertainingly OTT Kobra. Scott Lobdell’s script is fast-paced and efficient, while Denis Medri’s art is likeable, with a Scott McDaniel vibe. What I don’t like is the supposed heroes’ casual attitude towards killing, and the look of Red Hood – his hero outfit is pure Wild Dog, while his new haircut is unfeasibly naff. A few tweaks of tone and look, and I could see myself giving this series a shot. 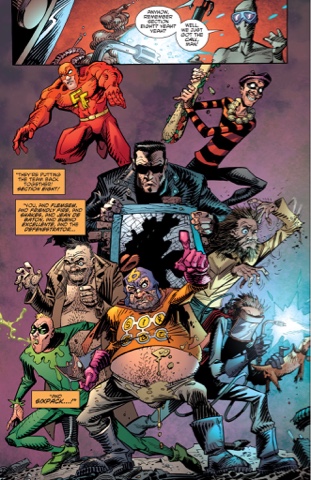 Section 8
Never would I have expected DC to revive, never mind give a mini-series to, Gotham’s worst superheroes, but here they are, direct – give or take 20 years – from the pages of Hitman. Original creators Garth Ennis and John McCrea are back, crafting a splendid first instalment that merges humour and suspense to terrific effect. Dumb in a very sharp way, this is a great reintroduction to Gotham’s more amusing side. 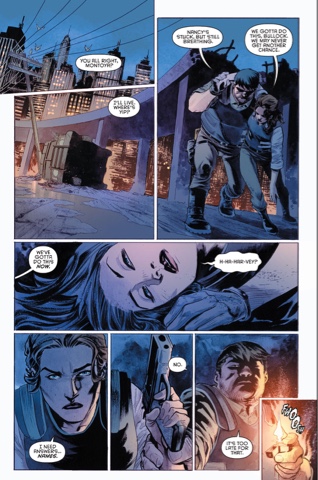 Detective Comics
It seems DC’s oldest Batman comic is going to be focusing even more on the GCPD than it has of late, with this preview starring Harvey Bullock and Renee Montoya. They’re in a big van bearing a Batman logo, with fellow cop Nancy Yip, chasing some massive, indistinct vehicle. Montoya’s crazy driving sees them overturn and new Batman Jim Gordon stops them getting killed, before he takes over their pursuit. Yip is trapped in the overturned vehicle, while Bullock and Montoya stagger away. And then …  i dunno – I’ve read it twice and couldn’t actually tell you what happened. Does Renee kill fella cop Nancy Yip? Does Harvey Bullock? Writer/artists Francis Manapul and Brian Buccellato are usually clearer in their storytelling but here, while the pages look great (helped by the gorgeous colours of the Hories), what’s on them is up for grabs. Which may, of course, be deliberate. Whatever the case, I can’t see myself bothering much with the bat books while Jim Gordon – aka Super-Marine – is Robot-Batman, it’s just too daft for me.