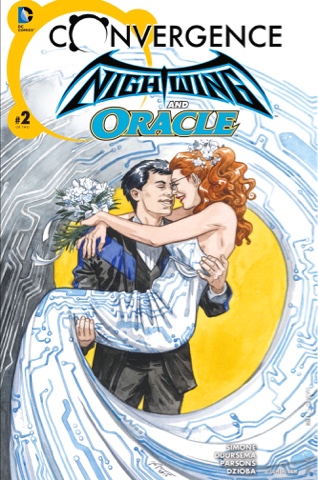 When we left Dick and Barbara, they’d been challenged by the Hawkman and Hawkwoman of another reality to fight for the survival of their world. Dick was battling in the streets as Nightwing, while Barbara plugged into her computer skills to become Oracle again, for the first time in far too long.

The conflict continues here, with Babs leaving her eyrie in the hands of an old friend while she takes to the air to join the fray. She’s been working on a way to stop the Thanagarian absorbascons – here, not just knowledge gatherers but doomsday weapons – and is close. While her ally monitors her computers’ search for answers, she arrives at the scene of the fight between Dick, Katar and Shayera. He’s held his own, with the aid of a new toy, but when Bab’s friend – did I mention her name is Dinah? – pipes up, the tide may be about to turn. 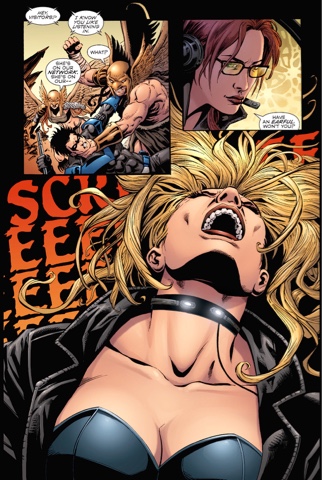 Of course, as this Convergence event is both a reunion with the heroes of an old continuity, and perhaps a farewell to them, there’s no guarantee as to who will come out of this alive? Surely this issue’s happy cover can’t really represent the outcome? 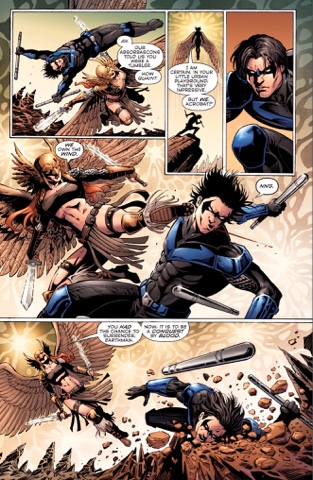 I’m saying nowt, buy the book and we’ll hopefully see more like it! Comics in which Gail Simone gets to write Dick, Barbara and Dinah as strong, competent heroes and firm friends and lovers. Comics in which penciller Jan Duursema gets to interpret classic DC characters as magnificent, sinewy beings whose emotions are as important as physical power. The smirk on Dick’s face as he fronts up against insurmountable odds. The determination of Babs to save Gotham. The song of Black Canary, in an image reminiscent of her contemporary, Brian Bolland’s, work. The craft on display here is admirable, and awesome – this is great superhero work, from not only Simone and Duursema but inker Dan Parsons, colourist Wes Ozioba, letterer Carlos M Mangual and cover artist Jill Thompson (check out the stylish nods to their heroic identities in the wedding outfits).

I don’t know if the close of Convergence, in a few weeks’ time will put this version of Babs, Dinah and Dick back on the table for future creators to play with. I hope so. For now, I’m glad to have had the chance to revisit some old friends.