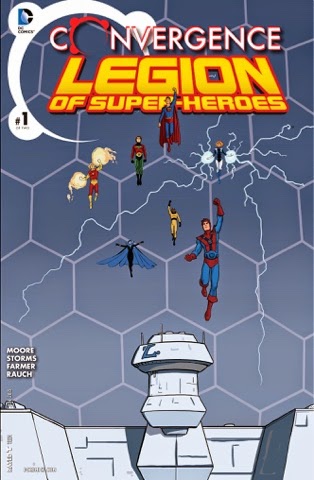 In a place outside of space and time, Superboy is trapped under Brainiac’s dome with his friends in the Legion of Super-Heroes. They’re powerless, but doing what they can to keep 30th century Metropolis together, physically and in terms of morale. Then the dome comes down, as Brainiac’s number two, Telos, declares war between representatives of different realities. The Legionnaires won’t kill, so begin making other plans, when they learn the city is being invaded – by the Atomic Knights.

Well, I’ve been wondering who could handle a new Legion of Super-Heroes comic after Boy Most Likely To Jeff Lemire decamped to Marvel, and Stuart Moore is it. In one issue he brings back the Legion I first loved, the never-say-die teens whose relationships were as compelling as their battles.

As with many a memorable Legion fable, just a few characters take the spotlight, with a smattering of other members from the available dozens lending support. Here it’s mainly Superboy and Lightning Lass whose conversations tell us something of the Legion’s history, and much about their personalities. 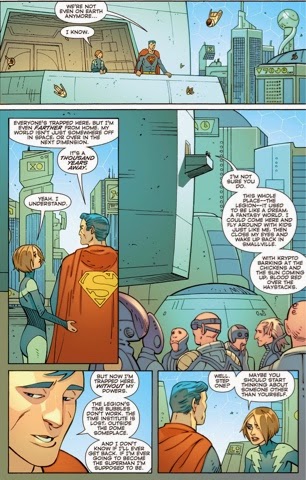 Superboy reveals what the Legion means to him, while Lightning Lass gives him what she considers a reality check, before opening up about her feelings for the absent Timber Wolf.

They’re wonderful moments for this old Legion fan, and I think this may be my favourite panel so far in Convergence. 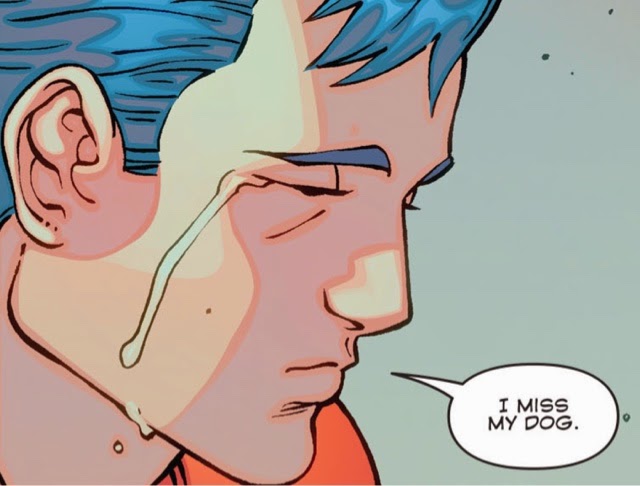 Brainiac 5 also gets some good page time: he’s worked out the dome’s composition – it’s formed from the wonderfully named nanotriangles – and is on the verge of figuring out that his forebear Brainiac is behind things, when the construct disappears.

Along with the poignancy, Moore finds room for humour, particularly in a scene featuring Not-So-Colossal Boy. Light and shade – so appropriate for a tale of the Legion of Super-Heroes.

Gus Storms’ big-eyed manga style isn’t my thing – in this story, Lightning Lass’s twin could be Sun Boy, while Brainiac’s nose is more than a little Wicked Witch of the West – but it’s breezy, characterful and optimistic, so not a bad fit for a Legion book. And his Superboy – who escapes the Eastern influences – is very appealing. Plus, I love the super-unsubtle but oh-so-believable Science Police alert. 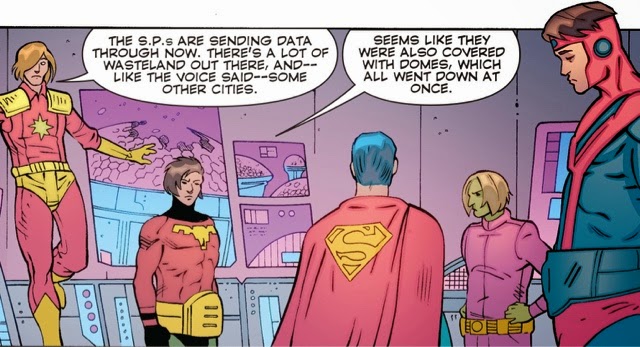 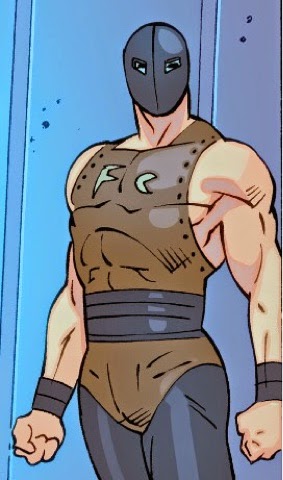 And while John Rauch does his usual good job with the hues, a miscoloured statue of Ferro Lad makes him look like a leather fetishist/Grimbor the Chainsman, while silver fox Lightning Lord has brother Garth’s ginger tones (picky, I know, but I’m a Legion fanboy…). Pat Brosseau letters, and does the business, while Pia Guerra’s cover illustration is a model of understated elegance.

Everyone seems to have had a ball putting this issue together, and niggles notwithstanding, I appreciate the efforts. I’m very much looking forward to the conclusion. And then perhaps Stuart Moore can get to work on a series proposal…