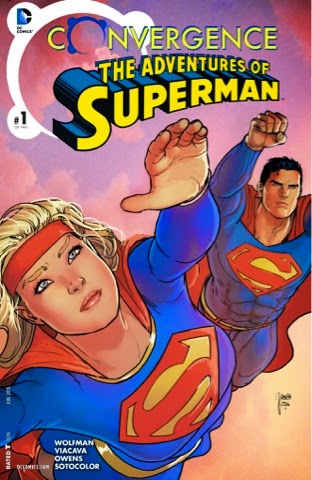 It’s pre-Crisis week in the Convergence event. Immediately pre-Crisis, in fact, with Supergirl in her Eighties outfit, complete with the Kryptonian citizenship headband that made her look like an Olivia Newton John homage act. Trapped in Gotham with Superman, she’s working with Waynetech genius Lucius Fox on a makeshift Phantom Zone projector. The idea is that if the cousins can get into the Zone – prison for Krypton’s worst criminals – they can look for a breach and emerge outside the dome under which Brainiac has trapped Gotham. 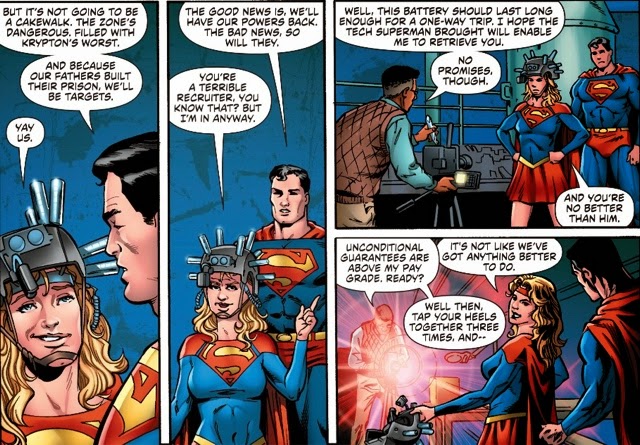 They manage the first part of the plan, but finding a hole proves tricky when they’re attacked by inmates, all of whom have a grudge against the Kryptonian cousins, as superheroes and members of the El Family. The pair split up to divert the forces against them. Along the way, Supergirl encounters, er, vision volcanoes whose fumes show the Crisis on Infinite Earths in her future. She sees her death, the conclusion of the conflict that follows, Superman carrying her corpse back to her parents.

Meanwhile, on Earth, Brainiac lackey Telos triggers the Convergence, dropping the dome and declaring war between the inhabitants of various realities. And heading for Gotham? The beast people of Kamandi’s future Earth. 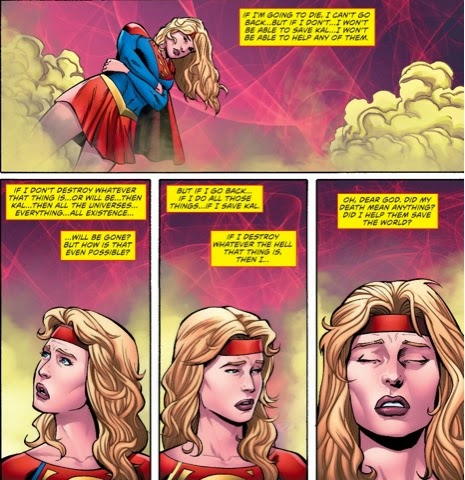 The vision triggers a crisis of confidence in Supergirl – how can she endure, how can she return to the physical realm when it seems she’s heading to her own death? But she’s a hero first and foremost, and she finally flies to aid Superman, who’s receiving a brutal beating from the criminals. She sees the hole that could take them to a place outside the Gotham dome – but they’re going to have to fight their way through it.

OK, deep breath here. I’ve learned that to enjoy these Convergence tie-in books it’s best to check your memories at the door. Details won’t always be quite as we remember them, because it’s not like DC has a library of everything they’ve ever published, it’s not as if much of it is collected, it ain’t as if there’s a huge amount of issues writers can consult online … I’m very forgiving.

So OK, here we have a tech-savvy Lucius Fox, not the business manager employed by Bruce Wayne in those days. We have a Phantom Zone that’s a physical place rather than a state, a full-colour world in which Kryptonians have powers and bodies that can fight and be hurt, rather than the grey realm in which inhabitants became disembodied beings, struggling to move through the fog rather than soaring from one end to another.

But the rewriting of Supergirl’s personality is truly annoying. Kara, veteran of hundreds of superhero battles, and almost as many tough personal decisions, is plagued by doubt. She needs Superman to tell her how great she is – but her confidence, the optimism he cites, vanishes when they’re parted. And then bringing in a big old predictive vision of the Crisis – honestly, Marv Wolfman writes this as if the only accomplishment Kara managed was a heroic death, something that inspired her already superior cousin to greater heights. 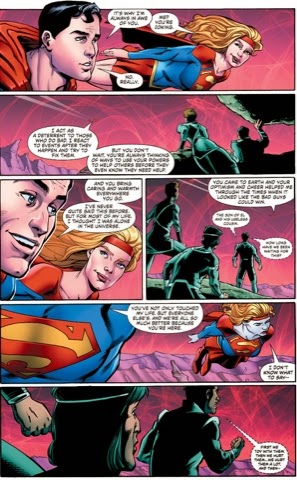 It’s a shame, Wolfman so nearly had me. The page in which Kal tells Kara what she means to him and the world would’ve been great if it had been left to stand alone, but the subsequent vision sees it become merely a cog in some contrived Poignancy Machine. I’d rather have seen Supergirl reciprocate the sentiments, tell Kal what he means to her.

But no, it’s all a big old callback to Wolfman’s finest DC hour, with the barely disguised message of ‘yeah, I killed Supergirl, but she was never much good’. Even the Kryptonian criminals see Superman as a threat and Kara as nothing.

Credit to Wolfman for having Kara disabuse them of that notion but all the good work is undone by having the Girl of Steel fall apart when she sees images of events with no context, and no reason to believe they’re inevitable. Pre-Crisis Supergirl was one of DC’s greatest heroes, a teammate of Legionnaire seer Dream Girl – she should note the images, be a little disturbed, but move on, vow to prove them wrong. As it is, she’s in some kind of fugue state for what feels to her like it could be a month…

All right, let’s be like true Kara and accentuate the positive. Wolfman does well to tie in this dome to her experience of the similarly covered Argo City. He seems to remember that Supergirl was something of a scientist. He shows a nice rapport in the dialogue between the cousins.

Let’s hope for more positive portrayals in next issue’s conclusion.

Roberto Viacava pencils, Andy Owens inks and they produce engaging superhero art. The cousins look, well, super, with Supergirl showing – at least early on – a nice twinkly sense of humour, while there’s enormous optimism in the expressions Viacava gives a pleasingly kiss-curled Superman. The fights in the Zone work well, he manages to make two whole pages of weepy Kara visually bearable, and the closing spread of gorillas taking the city – complete with gargoyle to remind us we’re in Gotham – is a winner. Colour house Sotocolor keeps things vibrant, though the colouring of Superman’s hair highlights rankles; ‘realism’ be damned, they were blue! But the first image of the (conceptually incorrect) Zone shows just what they can do, it’s gorgeous. 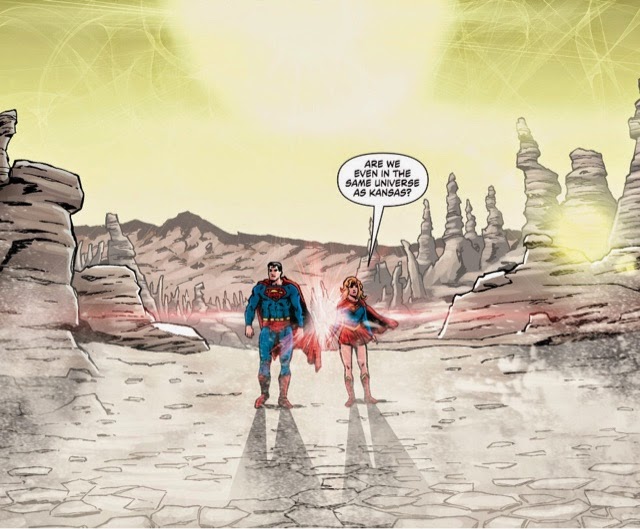 Mikel Janin’s cover is lovely too, such determination on our heroes’ faces. And while Kara’s skirt is the wrong colour, that was pretty much a Supergirl tradition.

So, some things to enjoy, but overall I could do without this issue – because while it’s nice to see pre-Crisis Supergirl, this isn’t the character I know.