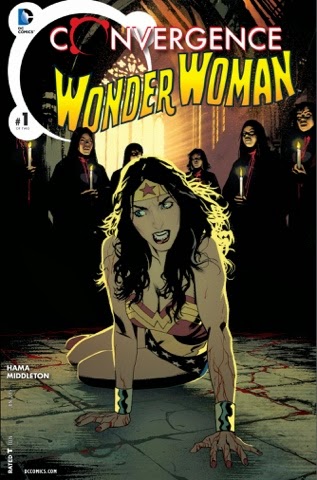 Wonder Woman is living with longtime beau Steve Trevor under the Gotham dome erected by Brainiac. She’s without her Amazon powers, but isn’t powerless – she’s helping the city’s poorest alongside best pal Etta Candy. Unfortunately, Etta has fallen under the influence of a warped Christian cult who believe angels are coming to undo the dome. When circumstances see Diana join Etta at one of their services, she comes into conflict with cult leader Miranda. And as Brainiac’s ‘prison guard’ Telos lowers the dome, Diana, Etta and Steve face an even bigger threat – vampire versions of Joker, Poison Ivy and Catwoman.

That cover logo threw me off – this week DC’s Convergence tie-ins are in pre-Crisis territory, which equals late Bronze Age, but there’s the masthead from the Groovy Di Prince years. As it happens, though, it’s a nice callback as Diana’s civvies here echo her preference for white outfits during her previous stint without super-powers. And as the backmatter makes clear, all that history remains in place, this is indeed the late Bronze Age heroine, the one who had a mature relationship with Steve Trevor. 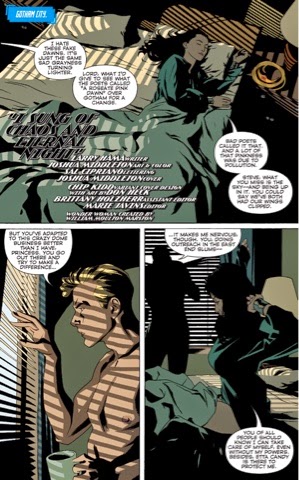 And it’s two intimate adults we’re given here by writer Larry Hama, a woman and man deeply in love with one another, freed by imprisonment to finally give their relationship time to blossom. Seeing Etta pulled into a cult was initially a bit of a headscratcher – despite hanging out with Diana, Etta was always hugely grounded – but she’s spent a year in very weird circumstances. And she finally comes through for Diana – in spades. Plus, the cult – named, with marvellous straightforwardness, Angels Are Going To Smash Down the Dome – does get the story going. 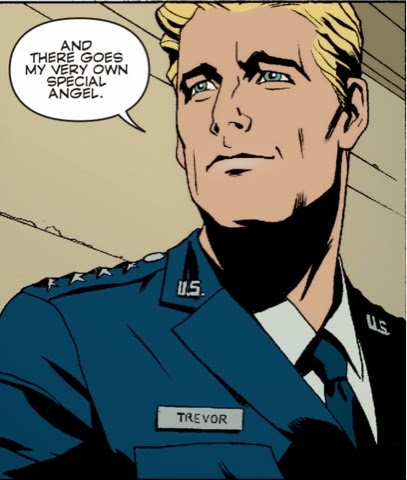 Steve is adorable, a hero figure with enough confidence in himself and their relationship not to get clingy with Diana. As for Wonder Woman, she’s her best, classic self – caring, compassionate, strong. The villains – who hail from the Batman: Red Rain Elseworlds universe – are deliciously creepy, especially the witty, loquacious Joker. And Hama paints his incidental characters, such as street kid Julio, without cliche.

Hama’s script is excellent from the first panel, in which we learn that Steve has a previously unguessed literary bent, to the last which I’m not going to spoil – but it’s a winner. 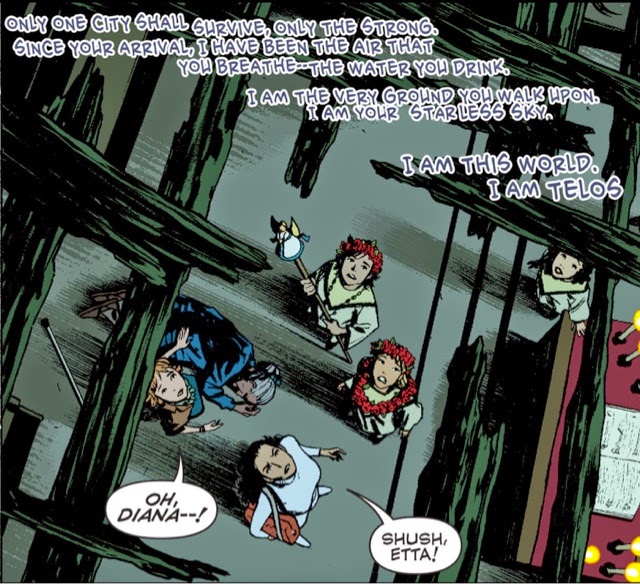 The success of the book is also down to Joshua Middleton, whose full colour art is almost hypnotically beautiful. From the expressions and body language of the many individuated characters to the tiniest detail of shading, this book looks stunning. Check out, for example, the way Diana’s tiara and golden lasso stand out on the nightstand on that opening page, above – understated yet eye-catching. Middleton’s individual compositions work with his storytelling sense to produce pages that pull the reader in, and along to the issue’s cliffhanger. As for his cover, it would sit superbly with anything from the non-powered era.

Given how DC seems to wish to present Wonder Woman these days – think sword-happy goddess – I wasn’t expecting much from this issue, but it proved a huge treat. I hope Hama and Middleton reunite at DC soon.