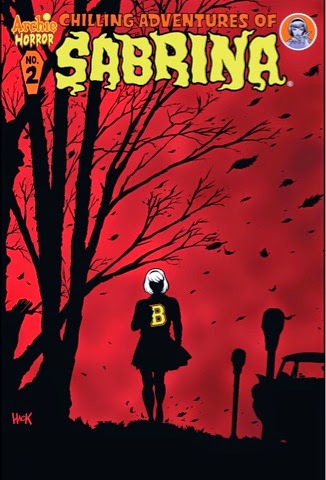 It’s been a long wait for the second issue of Chilling Adventures of Sabrina, a tortuous one given how wonderful that first instalment last autumn was. But the comic’s back, picking up right where we left off, with the hell whore that is Madam Satan returning from the Underworld after a spell. The issue follows her from a riverbed in the US South to the New England hometown of teenage witch Sabrina Spellman.

Along the way she steals a face from the prettiest girl at summer camp, hitches a ride with a truck driver long overdue for a rendezvous with justice, and visits Sabrina’s parents. Given that Mom is in a lunatic asylum and Dad has been transformed into a tree, you can be sure these encounters are intriguing. Madam Satan’s dealings with others, along with the omniscient narration, take us to the heart of her twisted soul. At one point I had a tiny bit of sympathy for her, but not for long – by the time she arrives in Greendale there’s no doubt she’s the blackest of the black. I’m looking forward to Sabrina, and perhaps her freaky family, facing this demon with a very particular grudge.

Roberto Aguirre-Sacasa tells his story in measured tones, so the horrific moments stand out all the more. My favourite piece of writing, though, doesn’t so much scare as touch, as he describes the routine of lonely school drama coach Ms Gardenia. 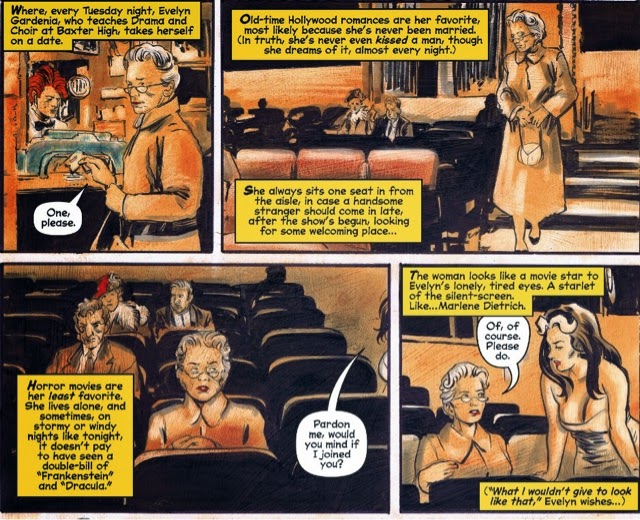 The biggest ‘whoa’ moment of the issue, I saw coming – it echoes a well-remembered Johnny Bates scene in Miracleman, and a homage to that in BBC ghouls drama Being Human – but it nevertheless works. The only off moment is the massive coincidence of the first person Madam Satan meets being a serial rapist-killer – it makes for a superb visual, but it’s a bit much.

Aguirre-Sacasa does, though, regain points for his knowledge of British breakfast cereals, as Sabrina breaks bread with her aunts and Cousin Ambrose. And the period detail includes fun nods to celebs, songs, books and films past – what else would be playing at the Greendale cinema but a Veronica Lake double bill featuring I Married a Witch?

‘The Secret History of Madam Satan’ (the Golden Age character kicked out of Pep Comics with the arrival of one Archie Andrews) is the chiller promised by this series’ title, a slow burn of a story that quickly grabs and never lets go.

Robert Hack continues to be the perfect artistic partner for Aguirre-Sacasa, his watercolour-style work lending a fairytale quality to the Sixties-set series that complements the script superbly. Favourite moments this time include Sabrina auditioning for the school musical, a flashback to Madam Satan’s courting days and the demon putting her face on – literally. Whether it’s all hell breaking loose, or Sabrina and boyfriend Harvey on the bleachers at Baxter High, Hack – who adds his surname to a scene as a fun Easter egg – makes it all look fascinating. His one bad choice is shoving Ann-Margret’s boobs in the readers’ face – get outta the way, already! 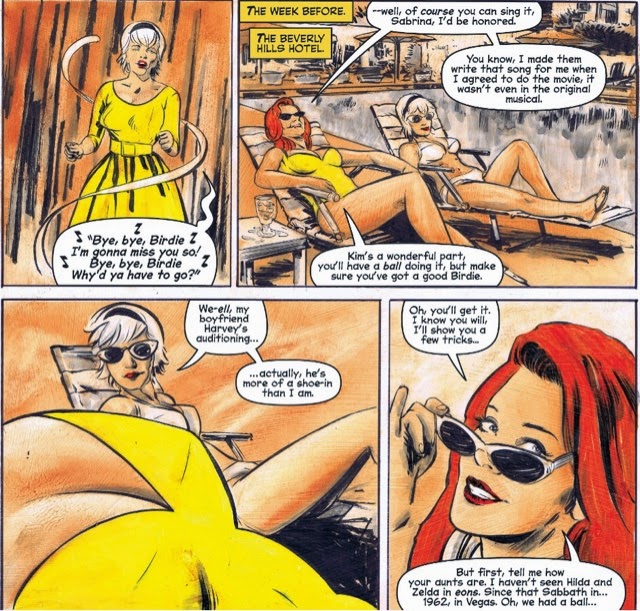 I’ve never been a fan of lower case lettering – a fad at Marvel in the early part of the millennium – but Jack Morelli’s choices work beautifully with Hack’s art, adding to that storybook feeling.

So, I have a couple of niggles, but nothing that stops me recommending this comic hugely to anyone who likes superb craft – whether of the witchy or comic book kind.

One thought on “Chilling Adventures of Sabrina #2 review”