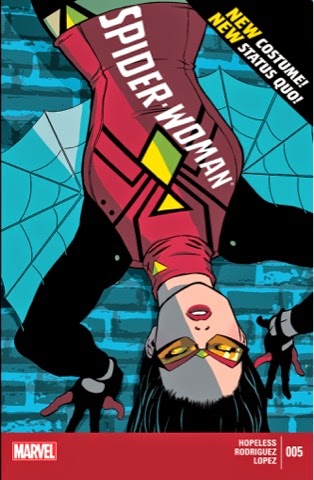 It’s her fifth issue, but really, this may as well be Spider-Woman #1, with Jessica Drew having left behind the Spider-Verse shenanigans of earlier issues to embrace a new direction in a new costume.

She’s quit the Avengers and severed her SHIELD links in the hope of helping ordinary folk while living a pleasantly mundane life. Given that she’s been surrounded by superheroic madness since childhood, I see the attraction. Jess’ first good deed goes wrong when it turns out she’s interrupted an NYPD exercise in dealing with super-folk, earning her a night in the slammer. Daily Bugle reporter and friend of Daredevil Ben Urich gets her out, in the hope she’ll help him with a missing persons case. Along the way he points out that’s she’s been doing a terrible job of being a street level hero, doing as much damage as she does good. 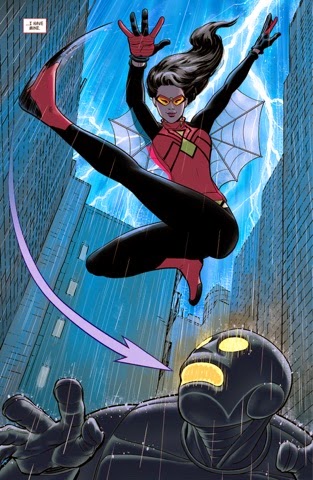 Jess isn’t terribly interested in helping find the missing wives and girlfriends of minor supervillains, until an encounter with one such changes her mind.

There’s lots to like in this issue, not least the Captain Marvel-style new look. OK, I prefer Jess’ longtime costume, but this will engage the Batgirl crowd, and it does look good. I’m less keen on her riding around on a spider-cycle – this is a woman who can glide, does ‘street level’ mean she has to be quite so grounded?

And I don’t buy that Jessica’s a bit rubbish as a superheroine – she has a lifetime’s experience in using her powers and was a solo hero for years before becoming a bit-part Avenger. I realise Marvel wants books to have the Hawkeye vibe, but that doesn’t mean every star has to become a sad sack overnight.

I do like Jess’s interactions with Ben Urich, it’ll be good to see their friendship grow, and I’m delighted she’s thrown off the SHIELD yoke; the current Marvel trope of heroes suddenly needing the annoying Maria Hill to tell them who to fight irks the heck out of me. SHIELD already has its super-agents, leave the other superheroes alone to find their own foes.

I love the prison scene, with Jess’s interactions with the other ‘guests’ of the NYPD being surprising and delightful, and there a great offhand gag nodding towards the recent Milo Manara cover controversy.

Dennis Hopeless’s script is breezy, and I look forward to seeing what he does with Jess. He could start by having her drop the #$%^ sweariness – it’s not necessary, more the style of Marvel’s other Jessica. 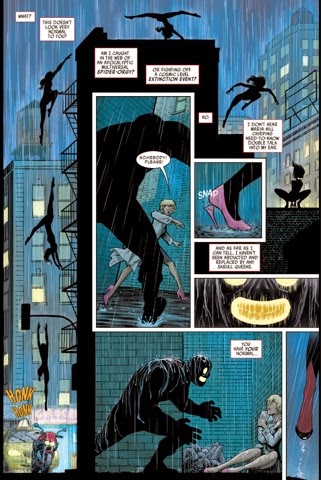 Combine Javier Rodriguez’ pencils and colours with Álvaro Lopez’ inks and the result is stunning – imaginative layouts, clean lines, killer figurework, convincing streetscapes, sympathetic tones – I hope this team sticks around. They already have a synergy with Hopeless that bodes well. Avengers Arena and Undercover showed Hopeless’ knack for making characters who feel human, and Jess and Ben are certain to benefit hugely. And if he sneaks in some of the macabre tone that was the USP of Jess’s original Seventies series, so much the better.