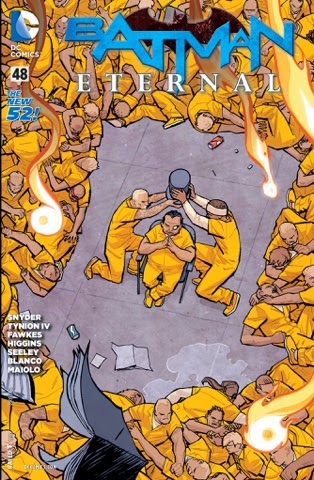 Batman Eternal is in the home straight, with the Batman Family fighting souped-up villains  at various points around Gotham. Jason Bard has realised he was wrong about Commissioner Gordon and tries to get the Mayor to sign a release form. The Penguin sparks a riot in Blackgate Prison – where Gordon’s incarcerated on a trumped-up charge – at the behest of the mystery manipulator who’s sent Gotham to hell over the past few months. Spoiler pays a visit to Vicki Vale, Hush complicates matters for Batman’s allies and Julia Pennyworth continues to be the coolest new character in years.

Seriously, I love this woman. She joined the Batman strips less than a year ago as Alfred’s estranged daughter and, stepping up after her father was injured by Scarecrow gas, has become one of Batman’s biggest assets. Like Alfred, she tells it like it is; like him she can run things behind the scenes while Batman’s out on the streets. Somehow, though, she’s even more effective than her manservant father, using her British agent training to deal with whatever comes up, a gritty grin on her face. If Julia doesn’t come out of this series alive, I’ll be a regular Mr Frowny. Heck, DC should be prepping a new Checkmate series in which she can star.

The other heroes earn their stripes too, as Batgirl, Red Robin, Red Hood, Bluebird and Batwing go up against the Joker’s Daughter (I much prefer Babs’ ‘Clown Girl’ nickname for the no-mark copycat), Clayface, Bane, Mr Freeze and, er, a bunch of flying drones. Poor old Batwing, he never gets to show off…

Batman himself doesn’t do much, mind, mainly commandeering a jet after the Batplane is grounded. And grunting.

Batman Eternal still doesn’t explain its title, and after 48 issues I could care less who the puppet master is, but ‘showrunners’ Scott Snyder and James Tynion IV keep the action and characterisation coming, convincing me they have a tight rein on their endgame. Kyle Higgins’ pithy script keeps things jogging along nicely, while Fernando Blanco’s storytelling and execution is exemplary. 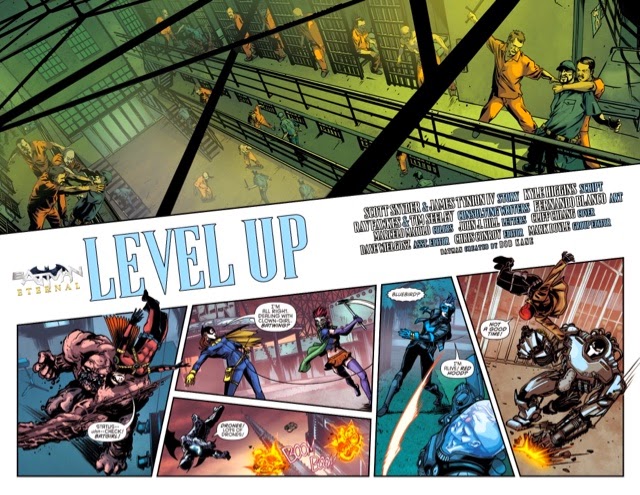 He excels in busy spreads, packing his panels with details without cluttering things up. And he conveys the chaos of the riot with apparent ease. 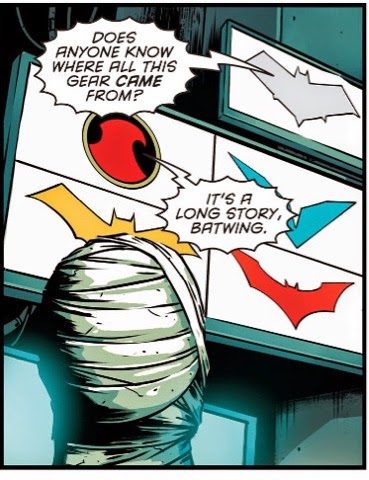 Then there’s the Legion of Super-Heroes-style mission monitor board – boy, they didn’t waste time sorting out a Bluebird card. My favourite panel, though, is a quieter one – I really like the sweep of that bridge. 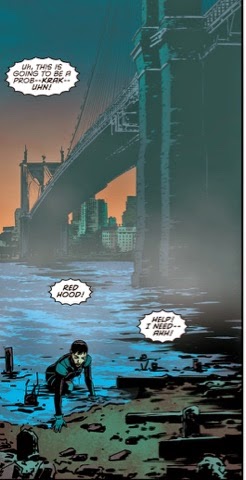 As for the cover by Cliff Chiang, it’s smart in concept and flawless in execution.

With just a few more issues to go to the end of this first ‘season’, I’m pleased I stuck with this DC weekly – despite an ever-changing artistic assemblage, Batman Eternal has managed a surprising level of visual consistency, while the story has provided enough twists and turns to satisfy.