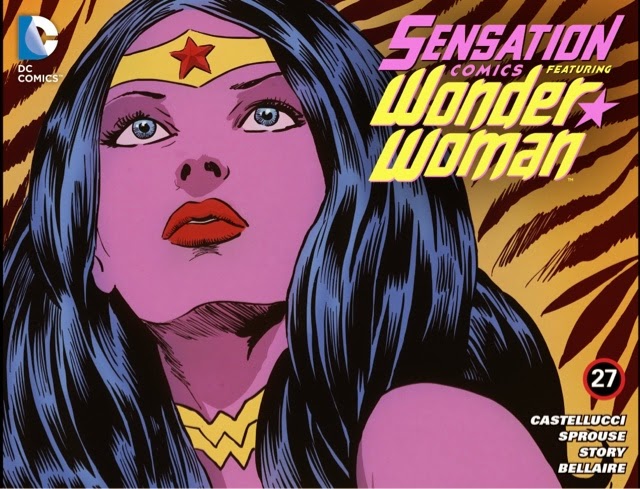 Well, after reviewing last week’s Sensation Comics and expressing disappointment, it seems only fair to point out that the conclusion of the two-part Wonder Woman/Lois Lane is something of a triumph.

As we left our heroines, they were facing speedily reproducing giant lizards on the streets of Metropolis, with Lois jumping into the fray alongside the Amazing Amazon. This time, Diana concentrates on holding back the horrific horde while Lois uses a reporter’s street smarts to tackle things from another angle.

Along the way, Lois has Diana toss her onto a balcony with the Lasso of Truth, motivating the book’s standout scene. 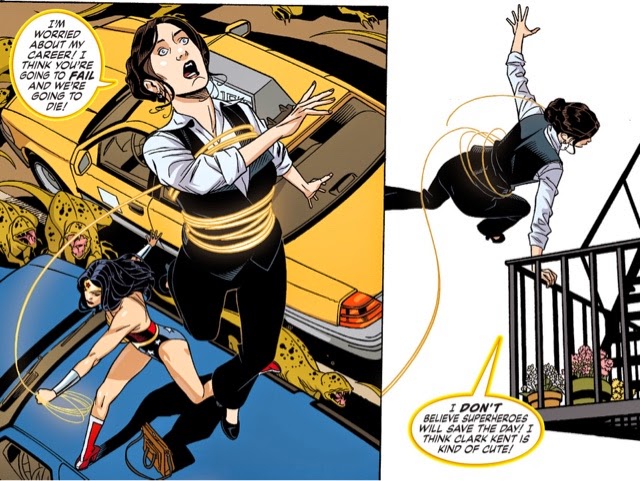 Writer Cecil Castellucci seems much more comfortable with Diana and Lois here than in part one, writing them as equals without having Lois encroach upon Wonder Woman’s status as kick-ass heroine. Lois impresses equally, but in a different way, proving that she really deserves her own series again.

Chris Sprouse and Karl Story’s art looks sharper than last time, giving us numerous edible shots of our heroines, and dinosaurs that could’ve come from their excellent Tom Strong work. The icing on the cake is the bright and beautiful colours of Jordie Bellaire. As for the letters of Todd Klein, the man couldn’t turn in a bad job if he tried. Then there’s that cover by Francesco Francavilla, a perfect piece of 21st-century Pop Art

So, it all comes out right in the end; the creative team leave me with a big smile on my face, and the hope we’ll see their take on Wonder Woman and Lois Lane again soon.