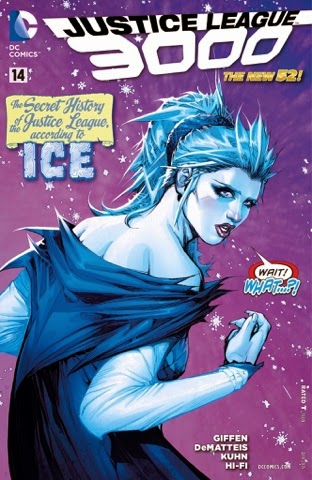 In which the immortal goddess Ice returns from a sleep of 1000 years. Blue Beetle and Booster Gold teleport to Cadmusworld and straight into the hands of precocious genius Terry. Terry’s sister Teri shows that since dying and being reborn with Barry Allen’s Flash DNA, she’s taken on pieces of his personality. And a strangely hate-filled – and strangely living – Lois Lane bosses around fellow Injustice Leaguer Sinestro.
The centrepiece of this issue, as the cover hints, is Ice’s story, what happened that sent her into a self-imposed big sleep. It turns out she was wandering through old DC strips – Kamandi and the Atomic Knights – but things weren’t quite as we saw them all those years ago… 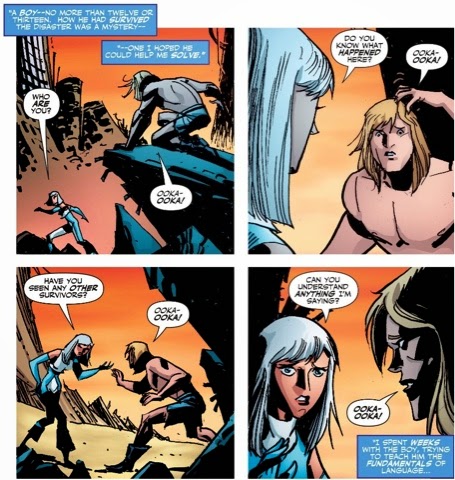 It’s fascinating, entertaining stuff from writers JM DeMatteis and Keith Giffen and guest artist Andy Kuhn. The story ties directly into old DC continuity, the JLI’s rather than that of the flashback characters, with the fate of Fire a key plot point – Bea’s not in this series yet, but bet that she’s on her way.
Come June, Justice League 3000 is retitled Justice League 3001. Why DC aren’t just calling it JLI 3000 I don’t know, because with every new issue this series is becoming more like Justice League International in the future.
And I couldn’t be happier, because Blue Beetle, Booster Gold, Fire and Ice are among my favourite characters. If the likes of Oberon, Mary Marvel and – could we ever be so lucky? – Ralph and Sue Dibny are waiting in the wings, look for me in hog heaven. Of course, it’s unlikely that so many members of one team could still be active aeons after their peak, but hey, JSA.
Which isn’t to say the reborn JLA members who have been with this book from the start are sidelined, with Green Lantern, Superman, Batman and Wonder Woman all around and on good form. It’s only now I realise that the spiky dynamics that so surprised in the debut issue probably represent how Giffen and DeMatteis would have approached these icons had they been available as regulars for their original JL/JLI runs.
Other moments worth mentioning are Terry’s namedropping (that is, we finally learn his surname, and it’s one packed with resonance for DC fans) and Wonder Woman’s openness about her lusty nature, which will launch a thousand fanfics (of course, this isn’t truly the 21st century Diana, bwah-ha-ha). 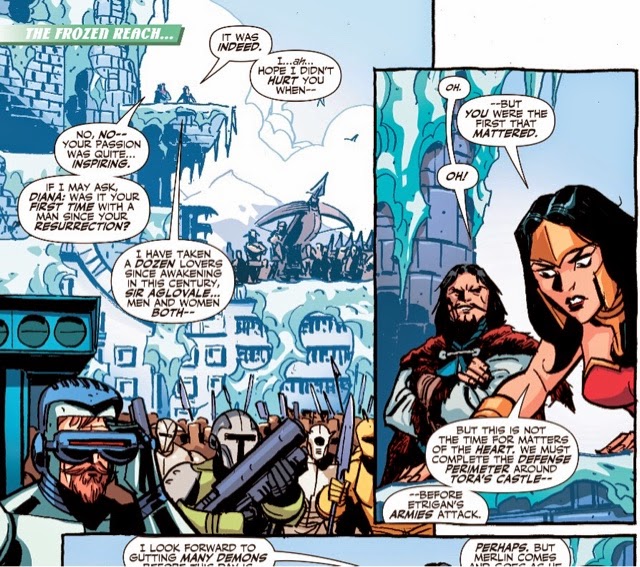 I’m not saying I take them for granted, but I’m well used to the inventive plotting and massively entertaining dialogue of Giffen and DeMatteis. I’m less familiar with the artistic stylings of Andy Kuhn and I have to say, more please. He gives us a whimsical take on regular artist Howard Porter’s character designs and his approach works wonderfully well for this issue. The light touch suits the Camelot framing story, wrongfooting the reader so that the dark fairytale within gains more power. 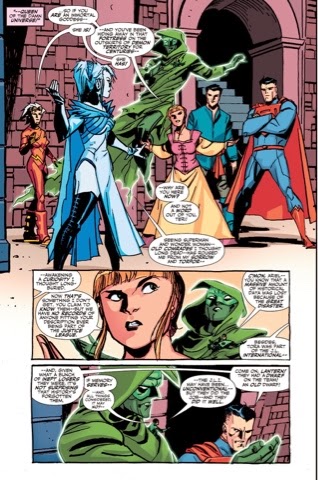 Kudos, too, to Porter for his gorgeous cover, HiFi for colouring it along with the interiors, Rob Leigh for lettering, and Harvey Richards and Brian Cunningham for edits.
I honestly expected this book to vanish with the DC revamp – it strikes me as just too much fun to survive. But go on it will – maybe not for 1000 years, but long enough for the talented creative team, regulars and guests, to keep thrilling and amusing.