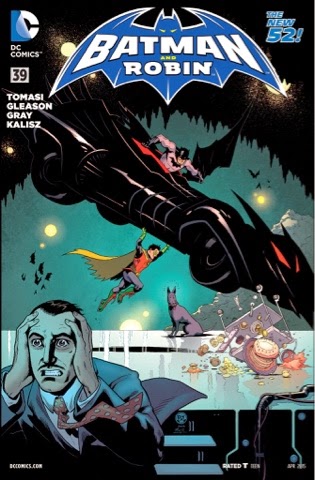 I’ve not seen the Harley Quinn variant cover for this issue but if it’s as attractive as Patrick Gleason and Mick Gray’s Action Comics #1 homage, I’d be surprised. Just delightful.

Inside, the newly super Robin has a message for Gotham’s crooks, letting them know there’s a new power in town; Bruce takes Damian for a dad-and-son fishing trip; Batman tries to temper Robin’s enthusiasm during a night on the town; and Robin gets to visit the Justice League satellite and hang out with Shazam.

Peter Tomasi has a wonderful handle on this book’s family dynamics, as the Bruce/Damian/Alfred relationship drives everything forward. Of course it’s father figure Alfred who suggests Bruce and Damian ‘do something in the daytime’. Of course Bruce is extremely cautious about Damian’s new abilities. And of course Damian wants to make both men proud while carving out his own crimefighting path.

An explanation is offered for Damian’s powers that boils down to ‘chaos sliver’ and it’s the very definition of Airplane’s ‘but that’s not important right now’ gag. What is, is that we’re getting a boy wonder who’s a literal wonder boy and seeing how that affects Gotham’s darker denizens, and the people who fight to bring light to the streets.

Damian brings light to the streets in a most direct manner, shining the Bat Signal down as he threatens a bunch of bad guys. Batman’s straightfaced reaction is a hoot. 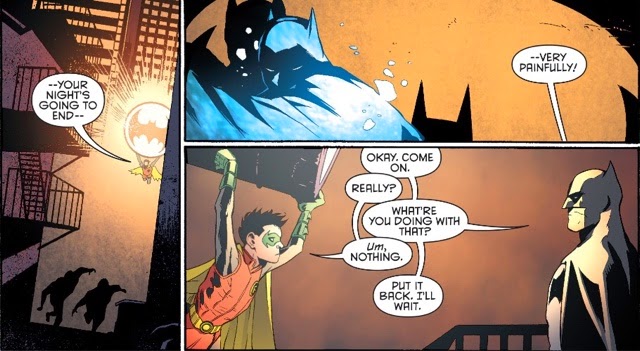 As a bonus, Tomasi gives us an after-the-fact, but welcome, explanation for the sheer levels of craziness demonstrated by Batman in the immediate aftermath of Damian’s death, and we learn of a potentially dangerous down side to the way Damian is feeling. Along the way, Tomasi makes a good case for DC giving him a Shazam strip once this series is renamed Damian, Son of Batman and the writing reins handed to Gleason.

Gleason, Gray and colourist John Kalisz continue to mesh superbly. Gleason’s compositions are striking, the emotions nailed with subtlety. Gray’s finishes define and add impact. And the choices of Kalisz hit the right balance of superheroic joy and Bat-moodiness. 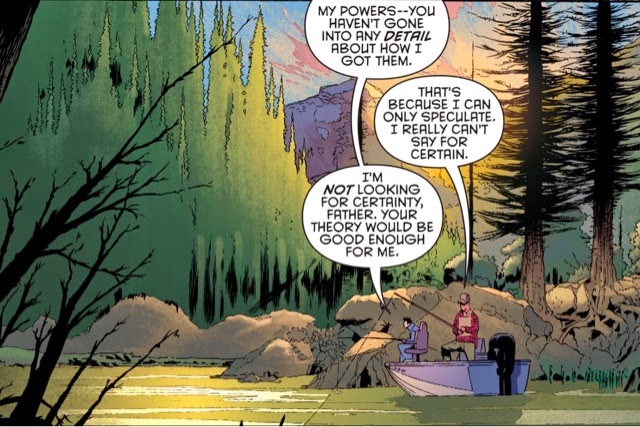 My favourite panel has me hoping for a bucolic Bat-book one day soon, with Robin’s splash page expression and his not-at-all-impressed-oh-no-not-at-all look in the satellite right up there. Words are brought to life by Carlos M Mangual in a typically sharp lettering job.

I don’t know how the new Damian book will work out, but I’m in no hurry to see this run end – Tomasi, Gleason, Gray have been the most consistent team from the beginnings of DC’s New 52 to today. I love this series.