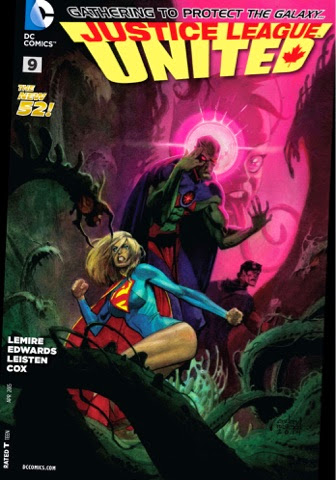 Ultra the Multi-Alien is transforming into the terrible god Infinitus, putting all of space and time at risk. The members of Justice League United and the Legion of Super-Heroes struggle to hold back his demonic heralds while Supergirl bids to stop Ultra’s change on the other end of a space hole. But in order to do so, she’ll have to get past his corrupter, Byth, who finally shows his true face.

Said true face could pretty much be described as ‘yuck’, a Lovecraftian horror of the type seen most recently in Action Comics and Afterlife With Archie. Must be a thing. it’s certainly a Thing, but Supergirl isn’t daunted. She finds Byth’s personality more horrible than his body.

This issue, the penultimate chapter of the Infinitus Saga, sees writer Jeff Lemire show us just how much he loves the Legion of Super-Heroes. I was worried by the first line of dialogue… 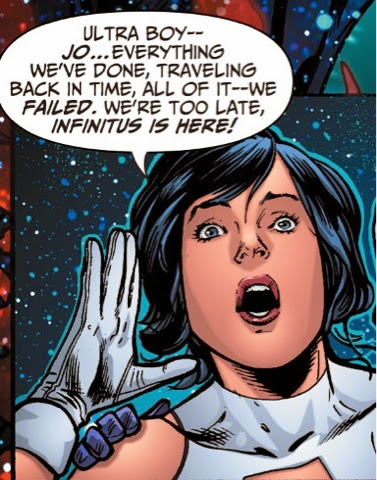 … which brings back memories of the horrible portrayal of Legion mainstay Phantom Girl in the final issues of the LSH’s most recent series, but it proves merely a melodramatic moment to kick off the big dramatics. Soon we have great moments for Dawnstar, Bouncing Boy and Colossal Boy, while Wildfire does what Wildfire does best.

And then there’s Brainiac 5, who’s developing rather the fun double act with 21st-century super-scientist Sardath, when he’s not driving Dream Girl crazy. 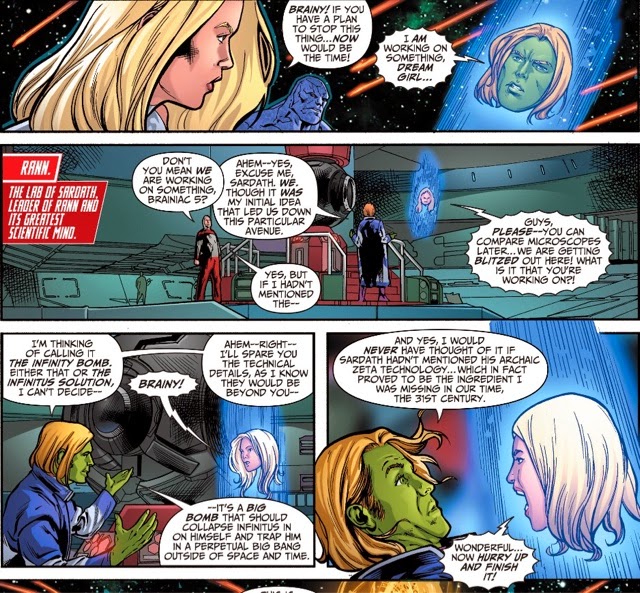 While the LSH gets a great spotlight, the JLU aren’t outshone in their own book, as J’onn J’onzz and Hawkman, particularly, prove invaluable in tackling the threat of Byth and Infinitus. There’s triumph, tragedy and a cracking cliffhanger for next issue’s conclusion.

Lemire’s plotting shines this month, as the story logic finds room for surprises among the big moments. Penciller Neil Edwards continues to be Lemire’s perfect partner in this arc, applying his strong storytelling sensibility to ensure pages that could be cluttered are models of clarity. Edwards’ elegant line makes this another lovely-looking issue – and he deserves extra points for giving us probably the most headshots ever on a splash page. Edwards having drawn the entire story, I’ll be hugely disappointed if he’s not around for the conclusion. Inkers Jay Leisten and Keith Champagne keep things looking sharp, while Jeromy Cox’s colours make the pages pop. Travis Lanham’s letters are as commendable as ever, while Andrew Robinson’s moody focus on Supergirl and J’onn is my favourite among his JLU covers.

Often, I get tired of stories that go on for more than three issues, but we’ve had five chapters of the Infinitus Saga, including the JLU Annual, and I’m nowhere near bored. The creative team is keeping the excitement high, with enough twists and turns to make this a terrific return to the DCU for a classic Legion.