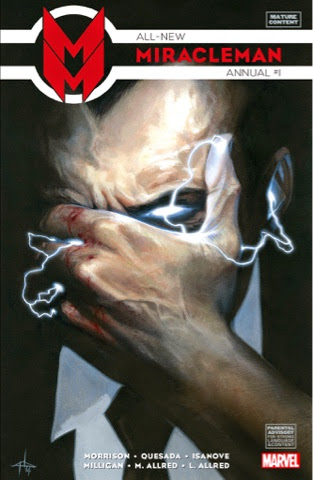 Having read the UK Marvelman stories as they appeared in the Eighties, then their US continuation as Miracleman, I’ve been able to avoid Marvel’s overpriced reprints. An annual of new material, though, that sounded good. Especially as one of the stories has a Grant Morrison script and art by Joe Quesada, and the other, work by the X-Statix team of Peter Milligan and Mike Aldred.

For $4.99 you get 21 pages of comic strips and 15 pages of script-to-art backmatter. OK, so my satisfaction with a book isn’t all about beancounting, quality comes into it, too. And the work here isn’t bad, it’s just rather, been there, seen that. 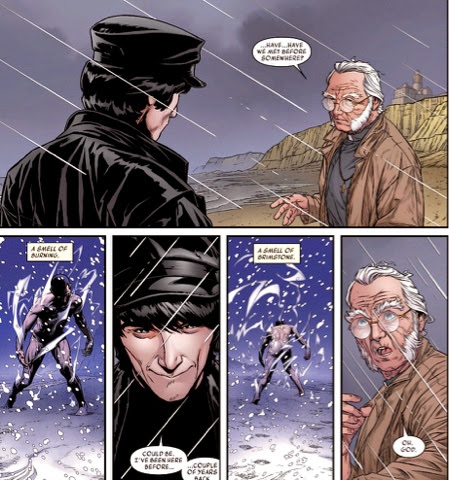 The first story, ‘The October Incident: 1966’ is slight, to say the least. A priest who saw the fall to Earth of Kid Miracleman a few years earlier, after the attempted assassination of the Miracleman Family by Project Zarathustra, is murdered by the newly mad Johnny Bates. It’s portentous and grisly, nicely written and beautifully drawn, but brings nothing new to the table. It doesn’t even add texture to the original stories of Alan Moore, Garry Leach and Alan Davis so much as underline them. Bates is already so bad he’ll kill a priest, big surprise. 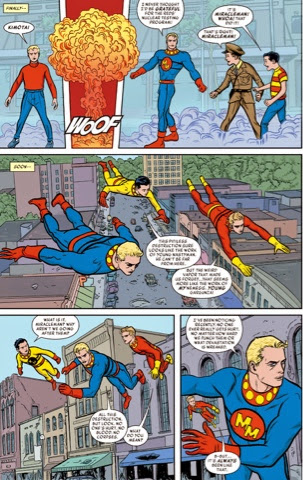 The retro style of Mike Allred, working with colourist wife Laura, is pitch perfect for the Mick Anglo homage required by Milligan’s script. No one draws gravity-defying heroes better than Mike Allred. ‘Seriously Miraculous’ is slightly more interesting than the opener, in that as the Miracleman Family go about their adventures, Miracleman begins to wonder about the sheer harmlessness of their villains (though there are some seriously creepy dolphins here). His subconsciousness is trying to tell him this world isn’t real. There’s a pleasing contrast between the always charming work of the Allreds and the questions raised, the effect being a melancholia rare in a superhero book, even one as self-consciously sophisticated as Miracleman.  The tale ends on a well-done homage to the first new Miracleman story, by Moore and Leach, but its very nature means that the clever moment is treading old ground

Gabriel Dell’otto’s cover is magnificently moody, but more suited for further down the line in the reprint series – a Quesada image with an Allred inset would’ve done the trick.

Marvel advertised this comic as ‘a must-read for any fan of the character, or the medium in general’ and ‘a can’t-miss comic event that will have the industry talking’. It isn’t, and it won’t.