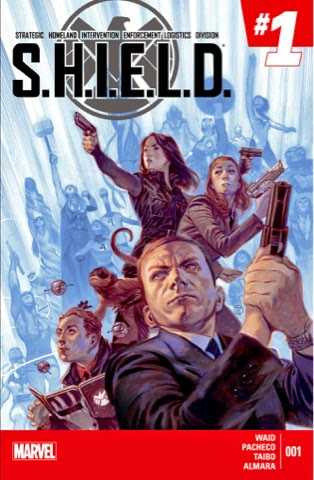 Didn’t anyone tell Mark Waid and Carlos Pacheco that spin-off comics aren’t supposed to be more enjoyable than the parent material?

But that’s what SHIELD #1 is, as it gives us a version of the TV show set in the heart of the Marvel Universe comics continuity, with no constraints on budgets or available characters. So it is that we get dozens of Marvel mainstays, from the Vision to Hercules, pitching in when the Nine Realms of Norse mythology begin crashing through to Earth. It’s Frost Giants and dragons a-go-go after something shatters the Rainbow Bridge between Asgard and Midgard, throwing the sentry Heimdall right out of whack. And leading the fightback? Phil Coulson and his Agents of Shield. 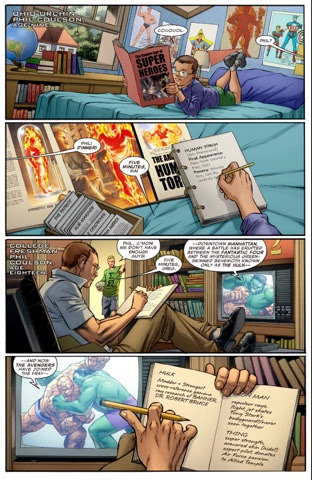 Fitz, May and Simmons aren’t integral to the resolution, but it’s nice to have them around, and I’ve no doubt Waid will do fascinating things with them going forward. We do get a wee focus on Coulson before the main event kicks off, I’d not be surprised were the other lead agents to get similar spotlights.

For now, Waid gets everyone’s voices spot on as he tells a satisfying done-in-one while laying out a new mystery. The big fight is bags of fun, and he brings in one of my favourite Defenders and a classic Avenger as secret weapons. 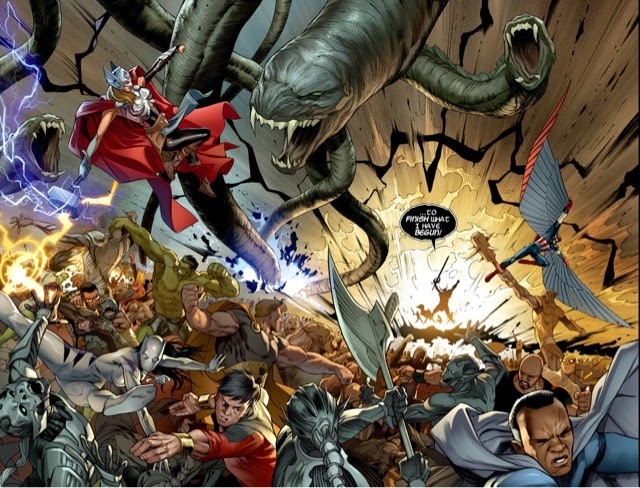 Pacheco has a great time with the wide canvas provided by Waid, mingling appropriate splash pages with nice character work and good storytelling. Mariano Taibo inks, with help from Jason Paz, keeping things clean and sharp. It’s great that Marvel Comics can use character likenesses, though Simmons and one of the guest stars are confusingly miscoloured in one panel. I don’t know if that’s colourist Dono Almara or a print house problem, but it’s a bugger.

Still, I enjoyed this story loads, as a slice of Marvel life that uses the TV characters to good effect. With 29 pages to play with in this $4.99 first issue, Waid, Pacheco and co have room for a more than decent adventure. It’ll be interesting to see how Waid and his rotation of artists cope with the regular 20-pagers. Let’s hope the stories are brilliant as I resent paying a dollar more for Marvels than DC’s same-sized books.

This issue is rounded out with a couple of one-pagers involving Fitz and his new AI monkey, which are a waste of space.

Julian Totino Tedesco’s cover is well done, clever and effective in its message.

Overall, a fine first issue. Not as earth shattering as its bad guys, but good enough to guarantee a purchase of the second issue.