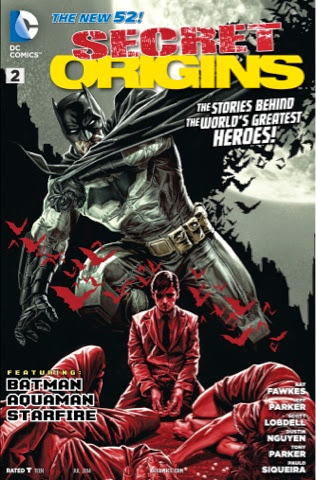 Last month Superman had the cover, this time it’s Batman, next month it’s Wonder … er, Green Lantern. So much for my theory that DC’s traditional Big Three were the opening acts for this origin anthology. Not to worry, the images we are getting are certainly winners, though I’d prefer group shots including the other featured players. Even little pics either side of the title showing Aquaman and Starfire would be nice, as a nod to the fact that it’s not all about the Bat.
That said, and my dislike for the current costume being a given by now, this really is a gorgeous depiction of Batman’s defining moment from Lee Bermejo. 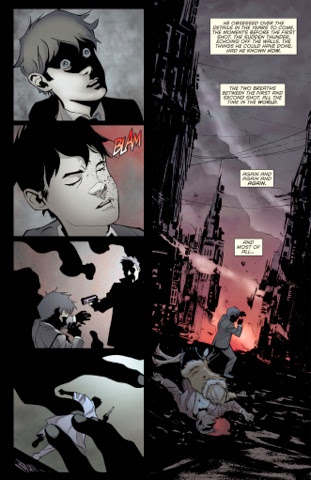 The excellent art continues inside as penciller Dustin Nguyen, inker Derek Fridolfs and colourist John Kalisz bring new visual life to a much-told tale. Whether they’re depicting mood, emotion, action or a combination of all three, every panel hits the mark, with some, including the final splash – a new Secet Origins trademark – being outstanding.
The script by Ray Fawkes deserves art this good. The omniscient narrator – I was thinking Alfred, but the voice is never specified – elegantly sums up how poor little rich boy Bruce Wayne became the bat, including such recent additions as the Wayne Manor hologram without needless detail. As a Batman primer, this will be hard to beat. 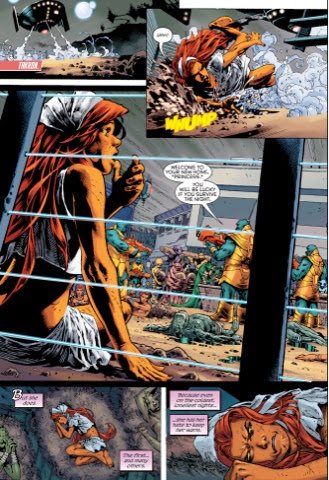 Princess Koriand’r of Tamaram, like Bruce, loses her parents to a cruel universe. Unlike Bruce, though, who had Alfred and a secure background to provide some comfort, Kori is sold into slavery, apparently betrayed by her sister. She endures more than a decade of pain and humiliation but only grows stronger, emotionally and physically. Experiments by insidious aliens the Psions unlock solar powers, with their first manifestation killing the one kind person Kori’s met in years. The experience teaches her to temper her temper, and she escapes slavery to lead a revolution.
Starfire has never been a favourite of mine – too often she’s been simply flying cheesecake – but writer Scott Lobdell does a more than creditable job of making her sympathetic. The only thing I don’t like here is the nod towards Helspont, one of those Wildstorm bad guys yet to make a decent impression in his new DC quarters. The illustrations by Paulo Siqueira are sharp and sleek, and I appreciate that for the most part Starfire is decently covered – I’m not a big one for sex and slavery being juxtaposed, inviting the prurient gaze.
Talking of visual juxtapositions, the final splash has an appealingly grinning Starfire in the foreground while the heads of Citadel aliens are mounted in the background. Serves ’em right, I guess, but blimey.
Letterer Carlos M Mangual chooses a flouncy font for the narration – again, it’s non-specific – bringing an appropriate fairytale quality to a mostly Grimm tale. Colourists Hi-fi and Pete Pantazis add another layer of excellence to Siquera’s illustrations, with bold choices. 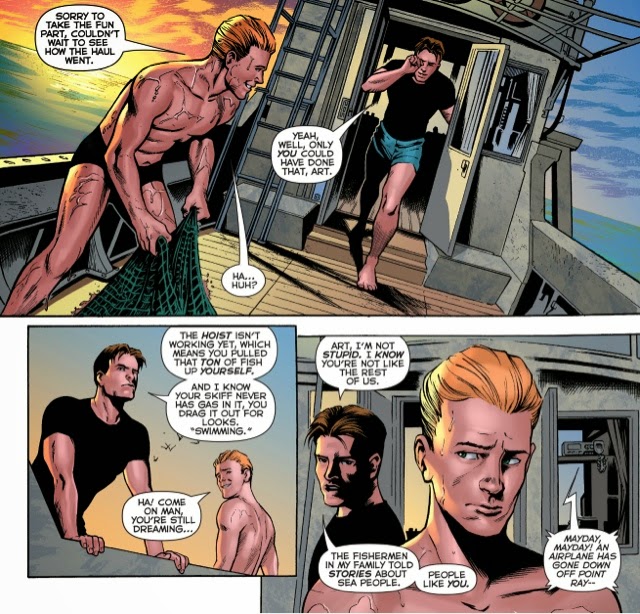 Aquaman was my reason for buying this issue in the first place, and I’m so glad I did. The series’ current scripter, Jeff Parker, continues his good work in making Arthur Curry an Everyman of the seas as we watch him grow up from water sprite to superhero. The narrator is Aquaman himself, looking back on how Atlantean princess Atlanna and lighthouse keeper Tom Curry met, fell in love, had a son and eventually parted. Why Atlanna left isn’t detailed, which is fair enough as Arthur doesn’t know at the time of the story; that’s something for another day. What we do get are the key moments from Aquaman’s boyhood and youth: the discovery of his abilities, the involvement of Dr Stephen Shin, the deaths of two fathers and the first public display of a hero, all smartly and satisfyingly framed.
Talking of public displays, Arthur doesn’t half look good in simple trunks, as drawn by penciller Alvaro Martinez and inked by Raul Fernandez. It’s great to see him as swimmer rather than superhero, as the look reminds us that the Justice League mainstay was once just a young guy from Maine. The storytelling and figurework throughout is a treat, and I’d love to see this team fill in on an issue of the regular series, or perhaps draw an annual. And if they get to give us their dramatic Black Manta for more than a couple of panels, so much the better. That includes colourist Rain Beredo … just look at that meeting of sea and sky above – gorgeous.
So that’s three heroes, three great summations of who they are and how they came to be. Now, if only Secret Origins would include a text page giving us facts that wouldn’t fit into the story, recommended reading and perhaps even a few letters, a fine new series would be even better.