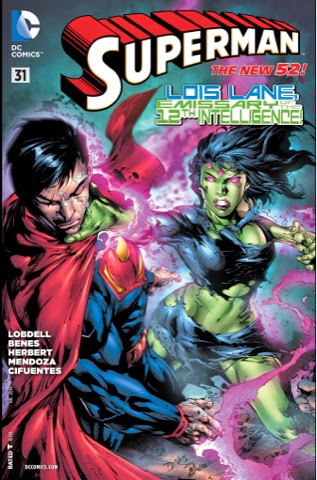 The Superman Doomed story continues in splendid form this issue, as writer Scott Lobdell bows out as series writer. His biggest dangling plotline is the problem with Lois, currently a secret psychic puppet of Brainiac. Here she messes up efforts to cure Superman of the Doomsday virus by having him leave Lex Luthor’s prison-turned-hero-hospital. An image of the Teen Titans battling Detritus – which starts with D for D-list villain – has Superman zooming cross continent to St Louis.
He helps the kid heroes, but with his spiky-chinned, mad-eyed Doomsday look scares them more than does Detritus. Superman doesn’t hang around, through – by the end of this instalment he’s flying off to parts unknown/the next chapter in Action Comics #32.
The Lois subplot doesn’t really move forward, though her mind mischief does add spice to the mix. Superman’s Girlfriend Wonder Woman is also on hand, but doesn’t do much bar stand around and worry as super-scientists Shay Veritas and Ray Palmer puzzle over Superman’s changing physiology. Cyborg and Batman are around too, the former for the taking of data, the latter for crossover value. 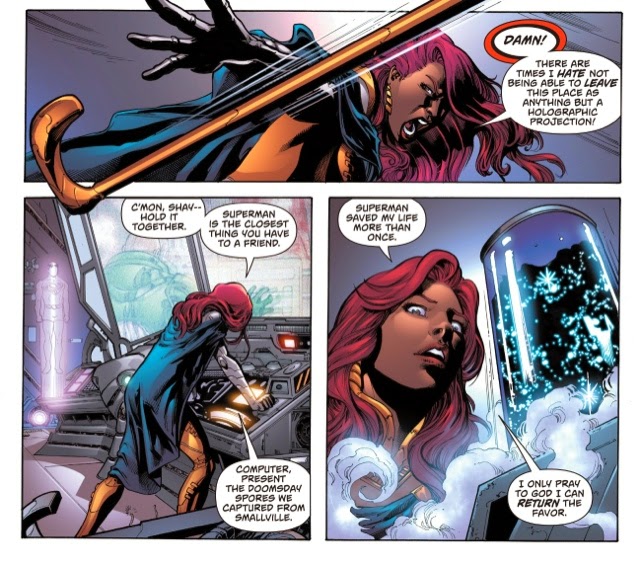 Lobdell does something I never thought he’d manage – he makes Veritas seem like a real character rather than a cardboard cut-out; for the first time I believe she really is a good guy.
The real story, though, is the artwork. Ed Benes pencils much of the issue, and does a thoroughly decent job, while Jaime Mendoza interprets and finishes with style and strength. 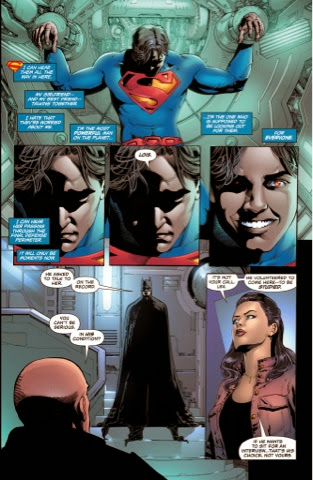 But Jack Herbert – good gosh, where has this man come from? His sharp compositions, attractive figurework, knack for pacing and flair for action have me keen as mustard to see him get a regular assignment. As finished by Vicente Cifuentes, there’s a Brian Bolland quality to the work which I love. More please, and soon. If Kenneth Rocafort happens to leave the relaunching Teen Titans, DC, Herbert is your man … 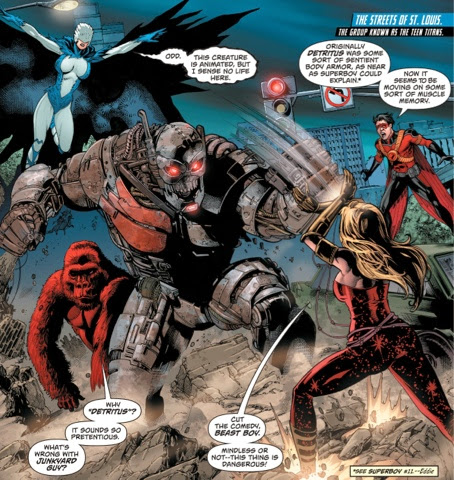 Credit order has me assuming Jeromy Cox colours Herbert and Cifuentes, and he brings his A-game, while tones titan Pete Pantazis handles Benes and Mendoza with his usual skill.
Pantazis also colours Benes’ decent, but rather standard, cover, while Jonathan Glapion provides the inks. And Rob Leigh letters the issue nice and neat, like.
Superman Doomed, against all reasonable expectations, has brought out the best in the Man of Steel’s books over the past few weeks, and Superman #31 is no exception. With Lobdell leaving right about … now … it falls to the creative teams of the other titles to get Lois back to normal along with Superman. With The Doomsdayed Superman, like the Parasite last time she was ‘cured’, being a power absorber, it shouldn’t be hard.
Before that, though, I have to say Goodbye Scott Lobdell. It’s been fun. Also mad, frustrating, annoying, H’ellish … but in terms of imagination and energy, I’ll have some fond memories of your time on this book.