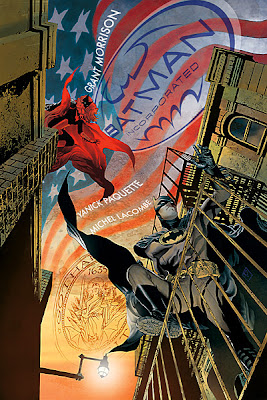 Now here’s a surprise. Batman’s adventure in Argentina continues, but over only a few pages. The bulk of this issue is a tale of two Batwomen – the current, Kate Kane, and the original, Kathy Kane.

I think this is the first time DC has told us that Kate isn’t simply an update of Kathy. They’re separate people, meaning Batwoman may henceforth be thought of as the new Batwoman. Greg Rucka and JH Williams’ origin tale a couple of years back seemed to position Kate as the current DC Universe’s first Batwoman, but Grant Morrison here tells us different. And whlle Kate has heard of Kathy Kane’s Batwoman career, so far as we know, it hasn’t influenced her.

Which kind of boggles the mind – same name, same decision to emulate the Batman, but no direct influence. And as we join the new Batwoman (that’ll take some getting used to), she’s fighting a thug named Johnny Valentine at Kane’s Kolossal Karnival, the amusement park owned by her predecessor.

That’s our cue for flashbacks explaining how rich widow Kathy Kane came to be Batwoman, complete with her own sidekick, Batgirl, aka niece Betty Kane (Kate also has a crimefighting niece, Bette Kane). Morrison drops in incidents from Batwoman’s Silver Age career, while expanding on what readers of those stories knew of Robin’s opinion of her. And finally, we see the day Batwoman retired, and are offered a new, utterly bonkers reason as to why she might have suddenly ended her relationship with Batman.

New Batwoman spends her pages chasing Valentine around the carny, finally colliding directly with Kathy Kane’s memory when she’s attacked by a tacky Batwoman I impersonator. She’s been led to Valentine, killer of three marines, by a neckchain linked to Batman’s Argentinian investigation. Kathy’s story also ties into current events, as we see her teach Batman the ‘tango of death’ which was demonstrated last issue.

And in Argentina, sinister mastermind Sombrero (feel free to snicker) persuades Batman to attack crimefighting colleague El Gaucho by claiming that the Argentinean hero was responsible for the death of … Kathy Kane.

Three stories, all linked by love, hate and South American passion. This is Morrison at his most wildly imaginative, yet accessible – last issue’s beginning to Batman Inc’s foray into Argentina disappeared up its own backside as surely as the Ouroboros serpent which, he tells us, eats its own tail. This is fluffier fare, densely plotted but compelling due to the characters, and mystery of the Batwomen.

And because of the visuals. This is Chris Burnham’s first DC art to appear since last week’s announcement that he’s now exclusive to the company. On this showing, I’d call that a coup. He uses three different approaches to the mini-stories in this issue – the continuation of last month’s tale retains a sense of regular artist Yanick Paquette, with an inkling of Morrison’s frequent collaborator Frank Quitely in the claw-headed person of Sombrero’s second, Scorpiana. The Kate Kane figurework is a dead-on homage to artistic creator JH Williams, with the rest of the sequence being, perhaps, pure Burnham, but looking to my eyes more like another hymn to Quitely. And the Kathy Kane story isn’t so much calling back to the Silver Age of comics as the Golden Age of magazine illustration, with our heroine unfailingly glamorous even when teaming a mourning frock with wellyboots. Burnham’s Robin is a terrific comedic recreation, with his understandable poutiness towards the intrusive Batwoman dialled up to the max. And Ace the Bathound is a slobbering joy.

Honestly, I’ve not seen enough of Burnham’s work to be able to give the best summation of what he’s doing here. What I do know is that he’s required to evoke three different moods, and he does so brilliantly. If Burnham stays on this title I won’t be thinking of Batman Incorporated as a writer’s book for much longer.

Also worthy of more than a word of praise is colourist Nathan Fairbairn, whose work here perfectly complements Burnham’s. He reflects the rich, glossy palette used in Kate Kane’s Detective Comics appearances, the cool colouring of Batman Incorporated and the Benday dots used in the four-colour comics of the Silver Age. It’s a remarkable display of talent and commitment.

The cover’s a keeper, too, with JH Williams continuing this book’s international theme against a marvellously vertiginous teaming of Batwoman II (hah!) and Batman.

Whether you’re following Batman Incorporated or not, take a look at this issue; I think it’s going to be looked back on as an important debut.