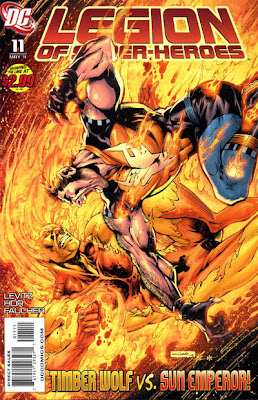 Following on from this month’s Legion of Super-Villains #1, Lightning Lass, Sun Boy, Phantom Girl, Wildfire, Ultra Boy, Tyroc and Colossal Boy help with the clean-up after Saturn Queen’s destruction of the prison on Takron-Galtos. Along with such old ‘friends’ as Tyr, we meet two new would-be LSV members, Fume and Frost.

Elsewhere on the prison world. Shrinking Violet spits on the body of Micro Lad – murdered by a fellow criminal – shocking Chameleon Boy. Vi points out that she has good reason, given their history, while Cosmic Boy, recently relieved as offical Legion leader, relaxes and allows his natural man management skills to flow.

On Earth, interim leader Brainiac 5 confidently appraises Science Police chief Gigi Cusimano of Legion activity, though he shows more vulnerability once he’s gone. The Legion’s resident genius is especially perturbed that Dawnstar has gone off on a mission of her own, then Dream Girl arrives to further irritate him. And thrill me. For Nura Nal is carrying on her back (she’s long been a whiz with the Legion’s gravity rings) Star Boy, back from an extended sortie in the 21st century. That trip mangled his mind somewhat, and she demands Brainy sort him out. Brainy reasonably points out that right now isn’t the best time, what with the LSV busy regrouping, but an unexpected arrival lightens his load. It’s new Green Lantern Mon-El, who announces that he’s figured out how to be in two places at once and is ready to take up his duties as Legion leader. So Brainy is free to try curing Star Boy of ‘multiversal disorientation accelerated schizophrenia’.

That facilitates my favourite scene of the issue, as Brainy and Dream Girl discuss the former’s feelings for the team. It’s dead-on character work from writer Paul Levitz.

Levitz also gives a good showing to Timber Wolf, in Kyoto looking for new solar villain Sun Killer. There he finds old solar villain Sun Emperor, mighty peeved that the new guy wants his LSV spot, and willing to take it out on Timber Wolf. Pure plasma vs flesh and blood? You might think Timber Wolf hasn’t a chance, but Levitz uses the fight to show his Legionnaire chops.

I counted 16 members in this issue, and bar the sleeping Star Boy, they all get something to do – no one juggles characters like Levitz. He doesn’t skimp on the villain characterisation either, with even probable throwaways Fume and Frost showing potential. I also love the way he uses the 31st-century setting to not only show us exotic worlds, but to predict how Earth might develop.

Bringing the script to life is guest penciller Daniel HDR and regular inker Wayne Faucher, who inject their characters with vitality and charm. The big match between Timber Wolf and Sun Emperor is particularly pleasing, having real intensity; I wasn’t at all convinced Timber Wolf would make it out alive. As it is, the incident is akin to the worst haircut ever.

Lending fire to the flames is the Hi-Fi colourist, likely Brian Miller. As well as the usual solid work, extra effort seems to have gone into giving texture to the Legionnnaires’ skins; it’s appreciated. John J Hill letters with his usual detail for individual character signatures.

Hi-Fi and Faucher also work on the rather spiffy cover, pencilled by Legion regular Yildiray Cinar. The issue closes with a lettercolumn including the results of the recent reader poll for Legion leader. Turns out that almost 20,000 unique readers voted, with my man Tyroc getting just over 500 – hardly a screaming success, but there’s always next time. The horror is that the awful Earth-Man came third. If anyone reading this voted for him, I’d love to hear your reasons.

11 thoughts on “Legion of Super-Heroes #11 review”