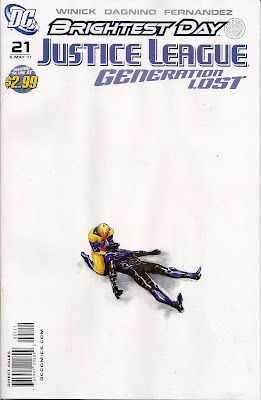 Blue Beetle is dead, Max Lord has gotten away and the JLA members are licking their wounds. Booster Gold and Skeets are trying to work out how to get Jaime Reyes out of the Scarab suit before delivering his body to his family. Captain Atom is telling Ice that the thousands of recent deaths are his fault. The resolute Rocket Red is readying his armour for renewed battle.
Little by little, team members emerge from their understandable funk, they lift one another’s spirits and prepare for the next round – but so far, Max has outwitted them at every turn. ‘I just want one damn thing to go our way. One win in this war!’ cries Booster. And out of the blue, he gets it.
I’ve long been a fan of the ‘day in the life’ issue, in which heroes don’t fight anyone, they simply touch base. And while this breather tale, The Dark of Morning’s Light, is motivated by exhaustion as much as anything, it’s one I’ll read again and again in years to come. For writer Judd Winick delivers a tender script that never nears being cloying. The interaction between the duos is perfect, from the frustration Booster expresses to Skeets over the way others see him, to the lovely, hoped-for moment Fire and Rocket Red share, through the role reversal of Captain Atom and Ice. The script sets the League up for the coming, final conflict with Max Lord, and beyond.
And if the final issues are drawn by this issue’s art team of Fernando Dagnino and Raul Fernandez, I’ll be delighted – I relish their clean, good-looking lines. They capture all the emotion demanded by the script without veering into melodramatics. DC would be wise to chain these fellas to a contract once this series ends (click on image to enlarge). 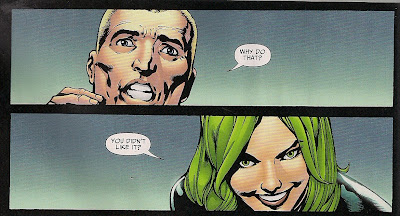 While we’ve seen the image over and over again of late, Dustin Nguyen’s take on the crushed Blue Beetle, with Booster weeping over him, is a winner. It simply exudes quiet power. The confident use of negative space only adds to the impact.
It’s just a shame the artist chose to stick his signature by Jaime’s left calf …