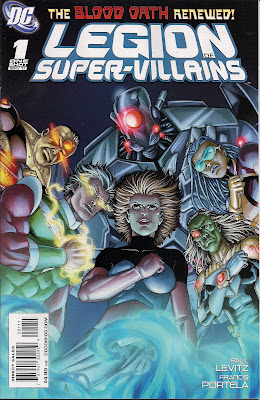 Wonderful as it is, one thing the revived Legion of Super-Heroes has been lacking is powerful, compelling foes. Well, here they are, in the latest version of the Legion of Super-Villains. Chief among them is Saturn Queen, always a super-hypnotist, but rarely as focused as she is today. Her powers augmented by a mysterious blue entity, she breaks free of 31st-century prison planet Takron-Galtos and begins gathering a team around her.
Lightning Lord, master of electric bolts. Zymyr, teleporter. Akka, martial artist. Sun Killer, wielder of solar energy. Hunter, tracker. Immortus, Inertron android. Questor, super-intelligence. Micro Lad, dead …
… oops. The shrinking violent villain is executed by a ‘teammate’ for interrupting the Queen. For ‘Saturn Queen’ is no longer a simple styling, Eve Aries is the recognised ruler of the LSV – that’s super-duper-hypnotism for you. And she has a quest for her subjects: find and destroy the three worlds ruled by immortals, representing faith, wisdom and will. The final world is obviously Oa, traditional home of the Guardians of the Universe. The first is the Rock of Eternity, associated with the wizard Shazam and ‘ancient Earth hero Captain Marvel’. And the second? That’s a mystery that takes the LSV to Colu, homeworld of superhero Legionnaire Brainiac 5 and villainous counterpart Questor.
Before that, though, we see the LSV strike at Eternity itself. They succeed in destroying the magical mountain, but unknowingly free someone a lot more powerful than any of them – and bring their quest to the attention of former LSH member Black Witch. She’s one of three heroes to pop up this month, the others being Wildfire and Ultra Boy as they investigate Saturn Queen’s escape from, and razing of, Takron-Galtos.
As the villains revere Saturn Queen, so I bow before Paul Levitz. The difference is that while the space minx forces fealty, her writer earns it with an exciting new story, solidly plotted, and scripted with flair. Saturn Queen is deliciously vicious, and while her teammates/subjects aren’t quite as charismatic, they display enough personality to command the attention. Some of these guys I remember of old, some seem new, a few likely are new and together they make a formidable fighting force.

And I cannot wait until they break free of Saturn Queen’s will and seek revenge.

Of course, she’s also something of a lackey herself, mentally or magically persuaded to the cause of the blue entity. I’ve little idea as to who this might be. Saturn Queen says it’s a power older than the immortals. It manifests as a blue flame. The only suspect I have is old JLA enemy the Warlock of Ys, whose power is connected to just such a manifestation of magic.
Which guarantees it’s not him – my super-power is jumping to stupid conclusions.
Not that I care. I’ve been reading about the Legion of Super-Heroes long enough to recognise when Levitz has clicked into epic mode. I’m expecting glorious entertainment as this story loops back into the regular LSH book, with battles between the two teams, guest appearances by unexpected characters (there’s one at the Rock of Eternity this issue), the return of long-unseen supporting cast members (there’s one of them, too) and lots of surprises.
If you’ve been reading the LSH title you’ll be familiar with artist Francis Portela, who often shares the pages with official illustrator Yildiray Cinar. He’s all alone here, and I relished spending a whole, super-sized issue in his company. He’s terrific at capturing the power and looniness of the people who would take on the LSH. Saturn Queen is the star here, looking a little like Desperate Housewives’ Brenda Strong (‘Yes …’), but there are also splendid showcases for the likes of Lightning Lord and Zymyr. His cute Micro Lad is especially appealing. Sorry, was. Portela deserves extra points for imaginative spaceship design, with the telling detail extending to the metal-meshed floors 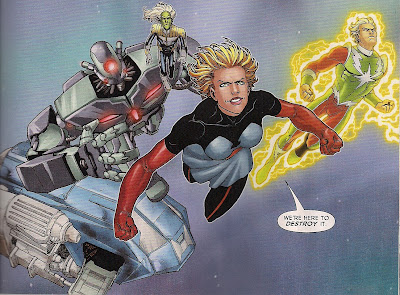 And Javier Mena adds to the look of the book with a gorgeous colouring job – the pages fair pulse with dazzling tones. Sal Cipriano does a bang-up job on the lettering, Brian Cunningham and Darren Shan edit and likely lots of unnamed production people deserve credit too.
I hope this book sells well enough for DC to slot another villains special in next year. Or maybe a Legion of Substitute-Heroes one-off. Or a Wanderers focus …

15 thoughts on “Legion of Super-Villains #1 review”