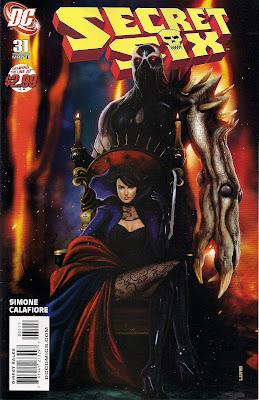 The ‘get out of Hell free’ card from this series’ first arc takes centre stage in a new three-parter as the team descends into the Pit. It’s not a united unit, though, with one member staying behind, and the rest out to catch the associate who’s stolen that very useful pass.
Let’s name names. Ragdoll has the card, nicked from Scandal, who wants to use it to secure the release of old girlfriend Knockout. Reasonably enough, he doesn’t see why she should get to use it and fights her for it. He wins and vanishes, hell-bent on bringing his old pal the Parademon – like Knockout, an Apokolips native and onetime Sixer – back from Hell.
The rest of the mercenary band – Bane, Catman, Deadshot, Jeannette, King Shark and Black Alice – back Scandal’s resolve to go after Ragdoll, though the last of these, Alice, chooses not to go there, not wishing to get caught up in unfinished business. She does help them find the way, though, and by issue’s end the team – along with a surprise guest – catches up with Ragdoll.
But that’s not all. There’s also room for a very scary comeback by the guy who was recently stalking Knockout lookalike, and Scandal’s current squeeze, Liana; an unsettling dream for Scandal; a rude awakening for Ragdoll’s creepily clad monkey mates; and the Six’s very own TV ad for dictators in need of a helping hand.
Gail Simone’s script is a lot of fun, with the featured members all on form, and the rest perfectly at ease in supporting roles. The highlight is being reminded that despite his light-hearted manner, Ragdoll is not a joke; he’s a highly dangerous madman.

The lowlight is this disgraceful panel, set at a shopping mall in Iowa which serves as the entrance to Hell (click to enlarge, then write a letter of complaint).

Gail, Gail … watch the post for a deep-friend haggis.
The question of the team’s membership still hasn’t been resolved – you’ll have noticed that there are currently eight members – so don’t be surprised if the odd hanger-on (>ahem, King Shark<) doesn't make it back from Hades.
While Scandal is a favourite character, I’m getting a tad tired of her love life, but the possible return of Knockout should bring things to a head. I only hope poor, ordinary Liana doesn’t get the short end of the stick.
Jim Calafiore has settled in as artist on this book, making the characters as much his own as did rightly praised predecessor Nicola Scott. His people – whether flesh and blood strippers or 500lb shark-men – live and breathe on the page. It’s extremely rare that he draws a clunker …

I kid. Simone, Calafiore and the rest of the creative team – let’s not forget brilliant cover artist Daniel Livisi – are producing a wonderfully twisted comic. If any Doom Patrol fans are looking to try a new book after that title’s coming cancellation (although we are trying to Save the Doom Patrol), try the Secret Six. The flavour is different, but the entertainment is of a similar quality.