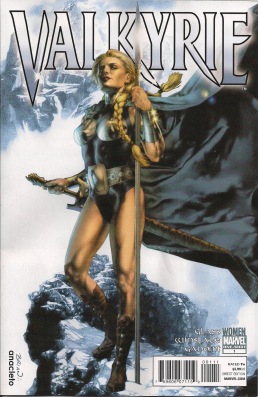 If DC’s Donna Troy is the poster child for convoluted histories, she has a counterpart at Marvel in Valkyrie. The role of Norse handmaiden Brunnhilde has been borrowed or stolen by the villainous Enchantress, spoilt rich girl Samantha Parrington and tortured soul Barbara Norris. Wikipedia mentions another alter ego, Sian Bowen, of whom I’ve no memory, despite having read the issues in which she appeared.

That’s comics, folks. And that’s the mess Marvel attempts to sort out in this one-off, set some months ago, to complement Valkyrie’s current membership of the Secret Avengers. So which Valkyrie is this? Enchantress Amora? Samantha? Barbara? Sian?

None of the above – in a cheeky bit of ‘we’re a comic and we don’t care’ business, the spirit of Brunnhilde winds up in the body of a woman named … Valerie, whom we see murdered at the start of this issue. Confused by the memories she has of Valkyrie’s days as a superhero, Brunnhilde finds old pal Janet Van Dyne, who proceeds to play to the worst aspects of her image, wittering on about fashion. She eventually gives Brunnhilde some sensible-sounding advice – be honest with yourself.

This leads Brunnhilde to seek out the paramedic who shocked the dead Val’s body back into animation, to see how he may be tied into her destiny – well, he’s nicknamed Ziggy, surname Siegfried. And she wants to give the brute who murdered Val, a hotel concierge, what for. It turns out that he, too, has links to Valkyrie’s past.

The two wind up in a big, satisfying sortie, and she learns that while Siegfried may be around, she’s not tied to him the way she was in the past/Wagnerian opera. The heck with destiny, Odin’s will or whatever – like Mary Richards, she’s gonna make it on her own.

I enjoyed this comic lots. It could have been one big continuity nightmare, falling into the Donna Troy trap of trying to explain everything, but instead adding layers of convolution. What it does is simply acknowledge that a few souls have used Brunhilde’s body, but the original is back, and she’s reclaiming Valkyrie’s place in the superhero firmament. Yes, the new body had one previous owner but, as they say, that’s not important right now … and Marvel’s Asgardians do have a proud history of benign bodysnatching.

And without banging us over the head with an Uru hammer, the story points out that Brunnhilde isn’t a one-note man hater, there’s more to her than that. For one thing, while she’s quick to anger, she’s not one to kill a foe when there’s an alternative, unlike some of today’s ‘edgy’ heroines (ahem, Wonder Woman).

A big thumbs up to Mice Templar writer Bryan J L Glass, in his first Marvel work, for entering the 616 universe with seeming ease. He knows his way around this world, providing Brunnhilde with a decent starting point for new adventures. While his Wasp seems a little too ditzy given the situation – confused friend turns up needing help, you tell her she needs a makeover – her apparent idiocy is a story point, and it’s not like Jan hasn’t been played this way a thousand times previously. Plus, she comes through with a very useful speech relating Brunnhilde’s situation to singing fat ladies.

Glass also brings in Bugs Bunny, as you would.

Phil Winslade illustrates, taking Brunnhilde on a journey from confusion to anger and finally peace. While victim Val is obviously the same physical person, there’s a gentleness to her not immediately present in the fesity Brunnhilde. Winslade draws a splendid New York city, never skimping on the backgrounds – the pages are filled to bursting with buildings, vehicles and everyday folk, all pleasingly naturalistic.

Making his art look even better is colourist Veronica Gandini, who softens the edges without ever taking away from the strength of Winslade’s work. And Dave Lanphear letters for maximum drama.

Jay Anacleto has Valkyrie looking majestic on his cover image, which works well with a tweaked version of the logo from the character’s last special, way back in 1997.

I don’t think Valkyrie’s ever had an ongoing series, and this story would make a fine starting point. For now, though, Brunnhilde folds back into the Secret Avengers. Let’s hope she’s developed some there, rather than ignored, as happened after the last ‘new beginning’.