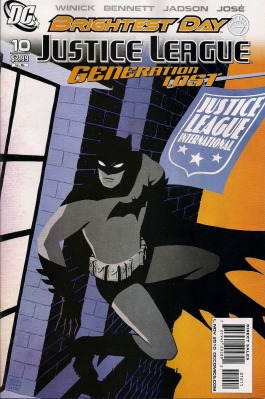 Cliff Chiang’s striking, deceptively simple Batman cover is the most obviously memorable aspect of this issue, but there’s plenty of good stuff inside too.

There’s the unexpected opening featuring the world of Kingdom Come, the wrap-up of Ice’s crisis of confidence and the ever-more impressive Rocket Red. There’s Max Lord manipulating the dimwit Magog, despite giving in to evil snickering. There’s a smart scene between Batman and Power Girl hinting that they will eventually beat Lord’s mental manipulation. And there’s a bookend appearance by one of comics’ truly unique teams.
Writer Judd Winick is maintaining the high standard of script that’s helped this book become a twice-monthly treat. The storyline is moving forward at a satisfying pace, with the regular introduction of new pieces of information, and plenty of smart lines – my favourite this time concerning Batman’s relationship to the criminals of Gotham.
Winick’s artistic collaborators give the book a consistent look, without being boringly uniform (which isn’t to say I’d not devour a guest shot from Chiang). This issue’s team of penciller Joe Bennet and inkers Jack Jadson and Ruy Jose are adept at action but also excel with the talking heads, even making dialogue from the robotic Skeets interesting to follow.
Sixteen issues to go and despite my initial doubts that the JLI vs Max Lord could sustain a series, I can’t see myself being bored any time soon. And I’d be seriously surprised were DC not prepared an ongoing JLI book even now. On this form, they deserve it.