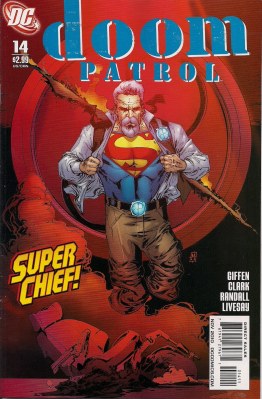 After years of tragedies, setbacks and general lunacy, you might expect the individuals who comprise the Doom Patrol to slope off into a corner to spend the rest of their lives muttering and dribbling. But no, they’re heroes and this issue the Fabulous Freaks decide, the heck with it, they have each other. Even diminutive depressive Bumblebee cheers up and asks to be an official member. They’re going to count their blessings, and get on with their lives.

Well, if Elasti-Woman gets away with almost killing her ex-husband, Steve Dayton, after years of mental abuse. And if they survive the latest attack on Oolong Island.

This month’s villain is – oops – Dr Niles Caulder, leader/cynical manipulator of the Doom Patrol. Having lost his useless legs he decides to give himself Kryptonian abilities. And, with a dead Kandorian on which to experiment, he manages it, but an overbearing, megalomaniac, superior personality doesn’t lend itself to the wise use of Superman-level abilities. He finally has the power to match his god complex and he’s going to show that uppity Doom Patrol who’s boss. While speaking Kryptonian.

This issue’s Fun Fact is, according to autopsy robot Millicent, that: ‘Kryptonian biological makeup, with the exception of certain reproductive organs, is identical to that of Homo Sapiens.’ Is that why Lois Lane is always smiling?

And this month’s testament to the sheer intelligence of writer Keith Giffen – well, apart from the whole bloomin’ issue – is page one’s recap in song by Ambush Bug, summarising the main plot points of this run in a Beverley Hillbillies-style ditty. Smart, that is.

As usual, the pencils are shared between Matthew Clark and Ron Randall, with inks by John Livesay. There also seem to be some breakdowns by Giffen, though it could be that the creators are merging into The Beast With Several Deadlines. That would be very Doom Patrol.

Whatever the sharing of responsibilities, the result is another attractive bunch of pages, perfectly conveying the intensity of the Patrol’s emotions and dramas. The cover by Clark and colourist Guy Major is a winner too. Major also colours the interior, which Steve Wands letters, and both men make a valuable contribution.

I’d love to see DC release a fat, cheap digest of some of its lesser-tried titles, such as R.E.B.E.L.S. and, especially, Doom Patrol. A big chunk of fine reading at a decent price would likely intrigue a lot of folk. Then they could come back and see how our heroes chastise the cheeky old Chief before, hopefully, sending him to the Old Comics Home for Beardy Old Gits.