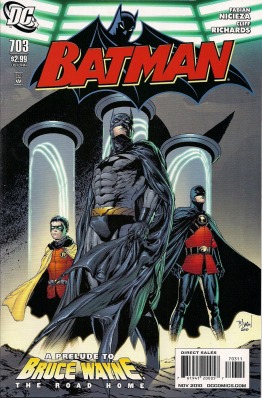 Now this, this is how to do a fill-in. Red Robin writer Fabian Nicieza and former Buffy artist Cliff Richards quietly pop by in between Grant Morrison’s Batman RIP ‘missing chapter’ and the start of Tony Daniel’s new run as writer-artist and knock it out of the park.


The story bounces off the familiar – but not tired – scenario of the new Robin being a cheeky sod to the original. Damian Wayne is singularly unimpressed as Dick Grayson chases the latest rogue in town, with Nicieza immediately capturing Damian’s snide voice: ‘You’re supposed to be a renowned acrobat. Why can’t you catch this common thief?’


Dick’s sharp, measured response shows that he’s in good hands too, and he’s soon remembering when he gave similar gyp to his Batman, Bruce Wayne. That’s the key to identifying who they’re dealing with – a new version of Silver Age obscurity Getaway Genius. By the end of the issue, Damian’s a tad more impressed with his unwanted big brother, while snapper minx Vicki Vale is very impressed indeed.


Tim Drake is also in here in his Red Robin guise, but we’re talking cameo. A bigger presence is Bruce, who transcends a flashback to inform the current case and Dick’s handling of it, justifying the cover blurb insisting this is ‘A Prelude to Bruce Wayne: The Road Home’.  The idea is strengthened by the faith Dick and factotum Alfred  show in the eventual return of their partner against crime.


Nicieza proves that comics veterans get to be comics veterans because they’re bloody good, producing an immensely satisfying drama in just 22 pages. There’s a smart set-up, a wee mystery, fabulous interaction, sly humour, arcane detective knowledge and a little character growth, all perfectly paced. A scene with Alfred and Damian is a sublime piece of writing, showing the depth of both personalities, and helping Damian understand that Bruce had/has many layers. And it’s gratifying to see that Dick won’t patronise the ever-snoopy Vicki Vale. Plus, daft as the idea of a villain whose raison d’etre is to show how nifty they are at getting away from a crime scene remains, Nicieza manages to make the newcomer’s real motivation more interesting.


I don’t know if Cliff Richards has illustrated any of the 47 regular bat-books previously, but he draws the heck out of this one. His opening splash page and spread, coloured by Ian Hannin, puts a lie to the idea that Batman titles must be set in the dead of night to be effective. Their neon-lit Gotham has me dying to see what this team could come up with if challenged to produce a full-on Dick Sprang update.


There’s a wonderful fluidity throughout the pages, whether the characters are racing through the city or at relative rest. Richards aces the facial expressions, nails the ‘camera’ angles and generally does a superb job of selling the story.


And if it wasn’t Richards, a ‘nice one’ to whichever production department squirrel dug up the old artwork commemorating the misadventures of the original Getaway Genius for the Batcave screens; it makes for a delightful comparison with current art styles.


There’s another artist represented on the cover, Tony Daniel, and I like the striking image of the nest of Robins, while feeling a little ill at the sight of Dick’s – what is it? – ten-pack?


Thanks to editors Janelle Siegel and Mike Marts for assembling this creative team (and that includes the excellent letterer, Jared K Fletcher) and I sincerely hope they’re lined up to swoop in and save the day the minute one of the upcoming new writer-artists announces their departure. Because Batman #703 is the most fun I’ve had with a Gotham-set comic in ages, balancing the regular seriousness of the Batman line and the joys of comics past to knockout effect.