After two issues of Blackest Night, in which a dark figure wears the flesh of the dead, here’s an issue about a dark figure who wears the flesh of the dead . . . Negative Man. But that’s where the similarities between the founding Doom Patrol member and zombies-come-lately the Black Lanterns end. For Larry Trainor is very much his own man. Or woman. Or hermaphrodite. And, actually, he’s not Larry Trainor. Not any more.

For as writer Keith Giffen spells out in this spotlight issue, Larry never did come back from the explosion that killed the original Doom Patrol – it’s always been Negative Man moving from body to body, usually at the behest of crazed boffin Niles Caulder. He’s no more the real Larry Trainor than Swamp Thing was the real Alex Holland, or Proty the real Lightning Lad.

And that’s all I’m going to say in terms of detail, for this is a rich character profile that rewards reading. We don’t simply get the gist of Larry and Negative Man’s relationship, we gain insight into how he views the other members of the Doom Patrol. For one, we begin to see why gorgeous and intelligent Elasti-Woman Rita Farr has issues other than her traditional, and unbelievable, ‘I can grow and shrink, people will shun me’ attitude.

Keith has been working in comics for so long, breathing new life into properties with inventive scripts and art in every genre you care to name, that he’s taken for granted. Put the man on a single X-Men book for six months and watch the kids discover him. This is one of the best pieces of character writing I’ve seen in years – rich in drama and meaning – yet it will be overlooked as flashier, better-promoted and frankly stupider comics walk out of the shop.

Artists Matthew Clark and Livesay, for their part, guide us through the Patrol’s many eras, evoking some very different artistic styles without losing themselves. Mind, I’d swear the first and last pages were done by an uncredited Keith, it’s his look to the life. Letterer Pat Brosseau and colourist Guy Major add the finishing touches, while editors Elisabeth Gehrlein and Simona Martore should be proud of this team, and story.

Keith shifts gears to plot the light-hearted second feature, which continues the Metal Men’s encounter with sinisterly stupid mannequins the Clique (c’est chic). There’s more plot and personality in ten breezy pages than in many stories twice the length. Panels are packed with characters, incident and dialogue but never seem crowded (click to enlarge). 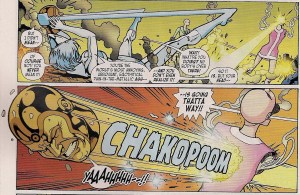 There’s even room for a little subplot, as Tina begins to question her weird attraction to creator Doc Magnus. Keith’s co-conspirators – JM DeMatteis on dialogue, Kevin Maguire on art, Travis Lanham on letters and Guy Major on colours – are at the top of their game, making it a crying shame that this strip is ending soon. It’s a highlight of my DC month.

If you’ve still not tried the new Doom Patrol book, give this issue a shot – for sheer variety, quality and amount of content I doubt it can be beaten.