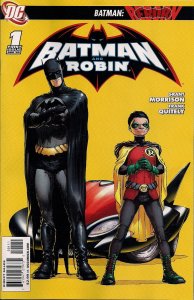 The new Batman and Robin have their first night on the town and, suitably enough, meet a new villain. Mr Toad is a self-proclaimed slippery customer but, alas, not exactly formidable and our heroes make quick work of him. They’re aided in this by the latest version of the Batmobile, one harking back to the Flying Batcave of the Silver Age. Before issue’s end we learn that British ‘minger’ (and how wonderful to see that in a US comic) Mr Toad is just a toady, the real villain of the piece being a pig-faced chap named, er, Pyg. And despite the name, he’s scary.

This is a terribly refreshing comic book. It acknowledges the shenanigans of Battle for the Cowl in that there’s a new Dynamic Duo, and Tim has left the building, but doesn’t dwell on it. Move on, there’s plenty to see. The building is Wayne Manor, and Dick, Alfred and Damian leave too in a ‘shutting up shop’ scene reminiscent of Batman #217, though there’s no ‘We’re closing up the Manor and Batcave’ chat – Writer Grant Morrison knows frequent partner Frank Quitely can pull his weight and convey the information, allowing Alfred and Dick to talk about other stuff.

Wayne Foundation here has, I think, a new look. Certainly I don’t recall it as being subtly bat-eared previously, so will credit Quitely for a clever design. Morrison keeps Damian annoying but shows there’s been some progress in changing his bad attitude. Annoying Robins get killed, so it makes sense to tone him down a tad. Happily, there remains enough arrogance and sense of entitlement (he’s the biological son of Bruce Wayne – well, presumably, we never did hear the results of the DNA tests taken during Morrison’s Batman run) to differentiate him from humbler Robins. Damian is also different in that where Dick was the acrobat, Jason the street kid and Tim the IT ‘tec, he’s a master mechanic, souping up Bruce’s blueprints to create the new Batmobile. Which likely explains why it has a great fat red breasted bat on it.

One of the things I like in a Batman story is a clue I can pick up on. That’s been uncommon in Bat-books since the early-Seventies (I think Mike W Barr was the last writer who made an effort in this area, in the Eighties). But it actually happened here, as I recognised Mr Toad’s speech patterns as Polari, the secret gay language used in Britain in decades past, when being homosexual was illegal. Dr Wertham would rise from his grave with glee were the new Batman to be conversant in that but, luckily, Polari shares many words with circus slang and we all know how Dick likes to dangle. So it’s ‘European circus slang’ Dick picks up on, all righty? Let’s not presume Mr Toad is a little light in the loafers – he’s just British!

Kudos to Morrison for an engaging, straight down the line story, one that impresses with confidence rather than complexity. Equally, Quitely brings his A-game, infusing Gotham with an unusual grace and making the cast members happily distinctive – at last, Damian doesn’t look like a mini-Dick/Tim/Jason. He looks, fittingly, akin to a baby Bruce. I like that Quitely is adding more lines to the faces than he usually does, greying up the characters some. And colourist Alex Sinclair completes the job, shading the phyzogs without overwhelming them. Quitely and Sinclair work well together throughout, making everything and everyone look a treat. Well, with one exception – I’m not keen on the new Batmobile, it’s more like Blue Beetle’s Bug than any Bat-car should be, but I imagine that’s Morrison’s idea. And it’s not going to be around forever, likely just as long as Dick and Damian patrol Gotham in Bruce’s stead. (And yes, I noticed that ‘Dick’ was never used, it was either ‘Master Richard’ or ‘Grayson’. Like I care!)

One splash I especially liked showed the lads trying out their new ‘paracapes’. Their attitudes as they glide down to the city show their differences – Robin diving in head first, Batman in a more considered plunge, which is how it should be with the dynamic duo. I see that the traditional roles are reversed, but not totally; yes, this Robin is grimmer than the usual laughing Robin Hood, but Dick’s been a serious fellow for decades and is understandably even darker of late.

And I applaud the panel that shows just how nimble Alfred Pennyworth is – could you come down a ladder carrying a tray of food?

A word about the cover – fabulous! When was the last time we had a bright Batman book, but our heroes look terrific, standing in front of the shiny new Batmobile and below the Seventies throwback logo.

I’m taking it as a statement of intent that Batman and Robin won’t be a miserable pair for long – more than anything, I want Dick’s cockiness to re-emerge so that he’s once more the daredevil he was created to be. The tweaked costumes show that they’re not trying to fool the likes of Gordon into believing they’re the Batman and Robin who have protected Gotham in recent years, so let’s see them carve out their own niche for awhile.

Whether I like the new Batmobile or not, it’s going to be a fun ride.

5 thoughts on “Batman and Robin #1 review”