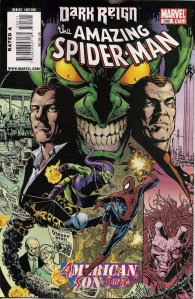 And a new storyline begins, American Son, in which Spidey determines to take down Norman Osborn, currently head of North America’s super-powered defenders. And quite right too, though I’d expect a big brain like Peter Parker to come up with something sneakier than kidnapping and beating up Osborn in public. And his anger makes him rather slapdash with his re-secreted ID. Still, it makes for an entertaining scene, and gives penciller Phil Jimenez a chance to homage a classic Spidey moment.

Writer Joe Kelly gets his first major arc here and comes in all guns blazing. Prior to the Osborn confrontation there’s an amusing vignette with Harry showing off his skills as a pick-up artist, followed by a terrific scene in which Peter and Harry join May and fiance J Jonah Jameson Sr at JJJ’s new home, official mayoral residence Gracie Mansion. OK, I’m not convinced that an old newspaperman such as JJJ would entertain someone he knows to be a psycho killer, but that’s Marvel these days – deals with the devil are the order of the day.

Harry is on superb form, dealing with his demons and telling JJJ’s special guest, his dear old dad, where to stick his latest job offer. And when Harry’s erstwhile fiancee, Lily Hollister, shows up in full Menace mode there’s a shock ending I never saw coming.

Jimenez and inker Andy Lanning more than earn their page rates here, providing good-looking, easy to follow artwork. A special thanks to them for tweaking JJJ’s hair to make it less silly, yet recognisably JJJ; now they just have to do something about Norman and Harry – by all means let Osborn Sr keep his trademark wave, but as Harry is distancing himself from his father, you’d expect him to want to stop looking like his twin. Even their hairlines are the same (I want me some of that Goblin serum).

The new-look Menace – she’s no longer letting people assume she’s a guy – is a treat and the action scenes are splendid (though I’d like to see a few movement lines, it’s become part of the grammar of superhero comics for a reason). The cover is a montage in the classic Spidey tradition and it’s almost a winner, but is far too busy. There’s about half an inch of bare space at bottom left, which I can only imagine is the result of Jimenez forgetting about when he popped off for a soda. The cover’s fussiness is made worse by too many mastheads – as well as the Amazing Spider-Man logo we have Dark Reign and American Son fighting for space.

Don’t be put off by my quibbles though – they’re minor, and don’t detract from an engaging beginning to a story that promises big things.