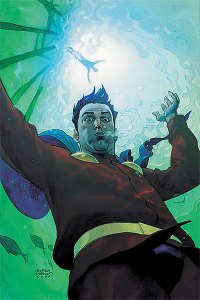 Holy Seventies Flashbacks, Mon-El has Supergirl’s on-again, off-again super-powers. It turns out that Brainiac 5’s cure for Daxamite-on-Earth lead poisoning is actually a bit rubbish, and he’ll be dead within 18 months. Darn. Luckily his partner-in-Superman’s-title The Guardian is going to teach him fisticuffs and swimming, to lessen his chances of dying in an off moment.

Apart from the powers revelation, the other big moment this issue sees our heroes rescue time-displaced Legion of Super-Heroes member Tellus from . . . er, I dunno. Writer James Robinson isn’t big on scene-setting captions and I can’t remember which of Metropolis’ many secret vaults this one is. Sort it out, someone. It’s likely US Army, as some high-up soldier (seemingly not regular pain in the backside General Sam Lane, as, I think, he has one more uniform star than this fella) and a handily unidentified Codename: Assassin. Anyway, Tellus is rescued and I’ve no idea where this story is going, which is a plus.

Another plus is the addition of a fresh supporting character for ‘Jonathan Kent’ aka Mon-El. Mitch owns the deli below Jon/Mon’s flat and is a good cook and nice guy, though one of those crashing bores who won’t just let you eat his food – you have to hear about its provenance, how it was cooked and what the farmer had for breakfast. Why people go to McDonalds . . .

‘The Fall and Rise of Jonathan Kent’ also features an appearance by Dr Light II, in her role as DC’s all-purpose scientist du jour, and screen grabs of the Red Circle and Milestone superheroes (this week’s Wonder Woman also helps prepare us for the RC characters’ official DU arrival). Instead of a battle with a master crim, we have a couple of skirmishes with armoured goons, one on-panel and, refreshingly, one off. I can live without massive confrontations month in, month out, as Robinson does what he does best – slow-burning little mysteries and character portrayals that build to a satisfying big picture. And while I was a big fan of Starman, it’s heartening to know we’re going to get the Mon-El/Guardian story in a year’s worth of issues rather than 80-odd.

This is proving to be a happily consistent run; once again penciller Renato Guedes. inker José Wilson Magalhães and colourist David Curiel craft page after well-composed page of good-looking art. John J Hill’s lettering is spot on, Andrew Robinson’s cover a grabber – there isn’t a weak link in the chain. If you have the money to try a new book, and haven’t given I Can’t Believe It’s Not Superman a go, try an issue. You’ll probably like it.