In an ideal world Marvel would wave a magic wand and the Power Pack kids would be de-aged and reunited to star in a new comic. We’re not getting that but Future Foundation does give us a couple of them, now Julie Power, aka Lightspeed, has joined brother Alex as joint head of Reed Richards’ outer space think tank for kid geniuses.

This issue opens with Julie being delivered to space jail by Yondu of the Guardians of the Galaxy. She’s not actually wanted for crimes, it’s all a cunning plan to free an inmate as part of the FF’s ongoing quest to find the remains of their old pal the Molecule Man, which are scattered across space.

I can’t say I was clamouring for the return of the Future Foundation kids – their previous comic was OK, but there are plenty of other Marvel characters I’d rather see return before them >cough Power Pack cough<. And I’ve no interest in the movie-style version of Yondu. That said, I liked this debut issue a lot. Writer Jeremy Whitley is careful to introduce his characters, giving the main ones an inner narrative as the action kicks off. They’re a tad theatrical in that Alex, Julie, Wakandan engineer Onome and Wizard clone Bentley-23 all have an ‘I am…’ moment but I enjoyed the conceit.

And while he doesn’t get a page or two to monologue, resident adult Dragon Man does get a fantastic moment with Bentley that shows his current, adorable character. 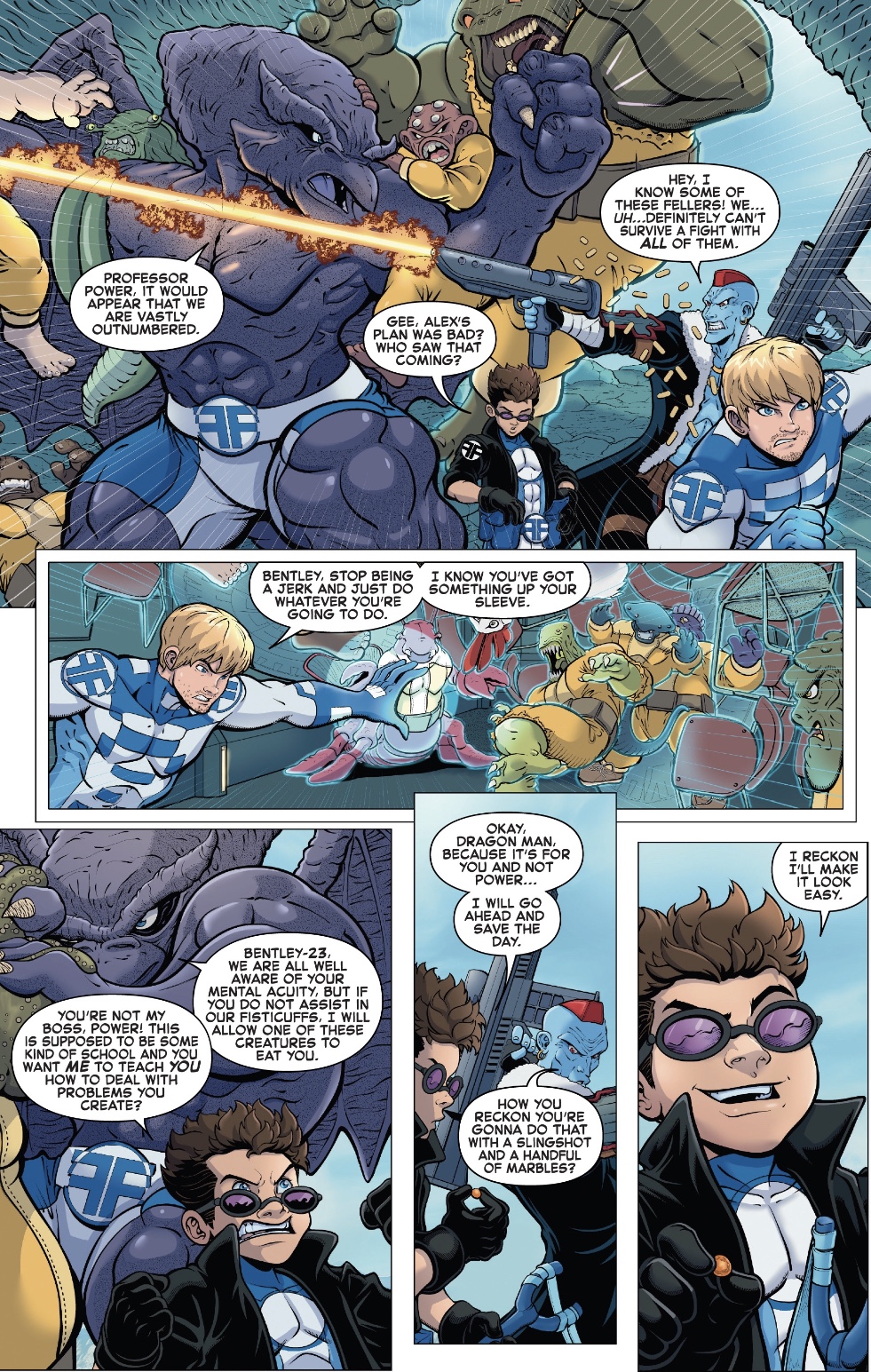 My favourite person in the book, though, is Julie – a loveable mess who can see the funny side of her typically convoluted Marvel life – she doesn’t quite break the fourth wall but she’s holding a metaphorical glass to her ear.

The book ends on an interesting cliffhanger and while I’m not interested in the villain who shows up per se – he’s always been too much of a moustache twirler for my liking – I’m confident Whitley, the man behind such quirky, thoughtful entertainments as Princeless and the Unstoppable Wasp, will pull a rabbit out of this guy’s especially stupid hat.

Does anyone know who the target of the prison break is? She’s called Rebecca, knows there are different Earths and is drawn in a Manga style at odds with the rest of the issue.

The work of Brit Will Robson is new to me but seems to have featured in a fair few US comics. There’s a liveliness to his pages which I enjoy. If Robson is the regular artist, he’d do well to simplify that terrible costume he’s inherited for Alex, it’s almost impossible to make look good; and if he could make him more the gangly youth, that would be great – Alex looks like he’s been on steroids. The other characters look better than fine, with Robson displaying a real facility for facial expressions. The pages he doesn’t ink himself are handled by Daniele Orlandini and I can’t see the join. Greg Menzie colours and seems to be having an especially good time giving us Julie’s super-cheery rainbow trail. Joe Caramagna letters with his usual style.

It’s probably a script instruction that doesn’t allow us to see what Alex sees when he recognises Mr Fantastic on a prison TV screen, but it would have been useful, helping us understand his determination to rescue his former mentor. As it is, the situation is undersold.

I’m not a fan of the logo – it’s far too sedate and pompous for this bunch of firecrackers – but the cover illustration, executed by Carlos Pacheco, Rafael Fonteriz and Matt Yackey, is a beaut.

All in all, I liked this opening chapter enormously – Whitley knows how to plot a book and fill it with fun personalities interacting against a backdrop of solid Marvel history, while Robson and partners brings a real pizzazz to the visual side of things. Whether you’re a fan of the FF, Power Pack, superhero space opera or none of the above, give this debut a try.