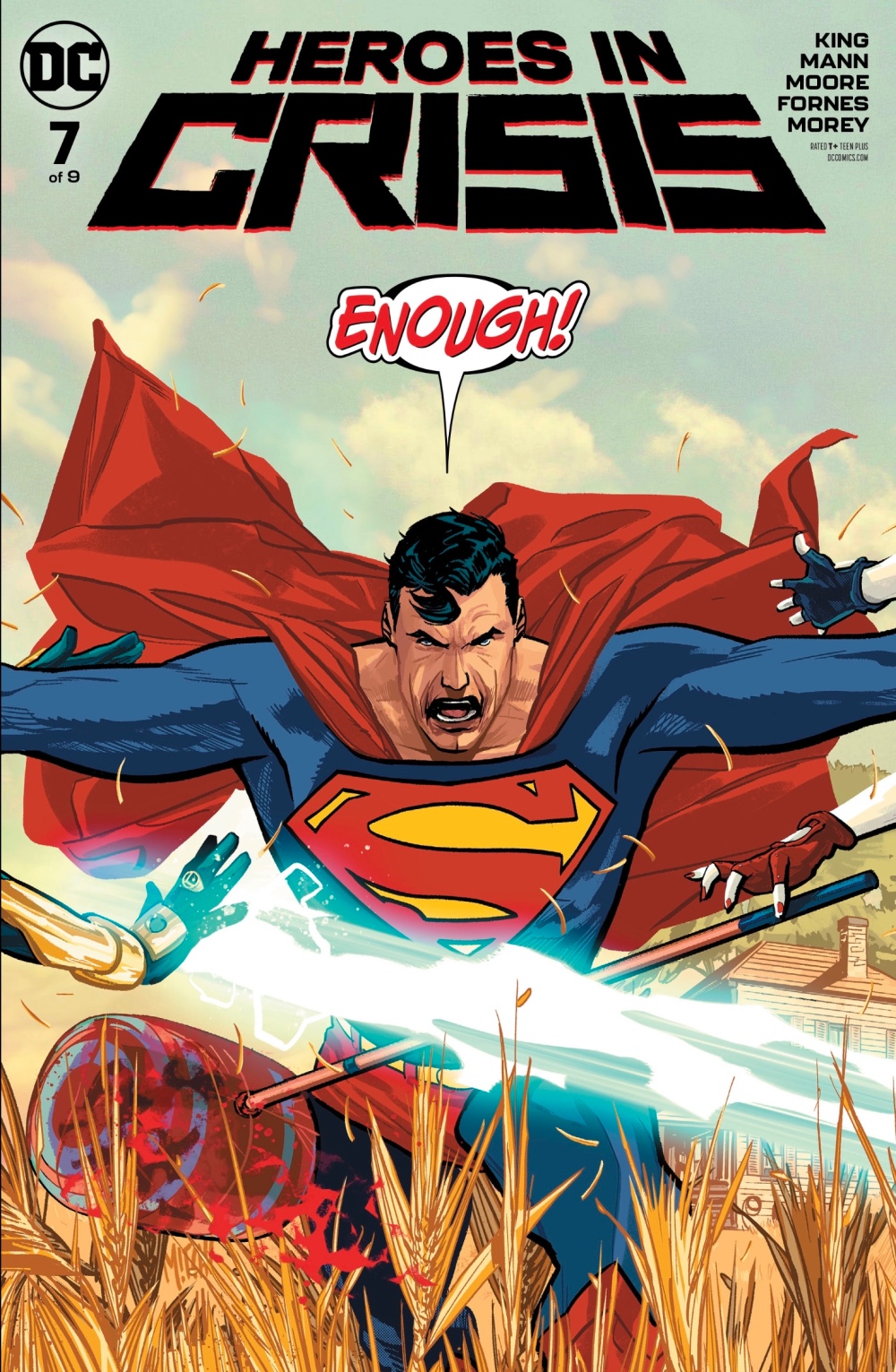 I agree with Superman after reading this issue, a real step back from last month’s decent chapter. As originally announced, this number would have been the finale, but writer Tom King had two extra comics added to the run to, supposedly, go deeper into the story. Given this issue isn’t drawn by added artists Lee Weeks or Mitch Gerads, it’s obviously one of the originally planned issues. 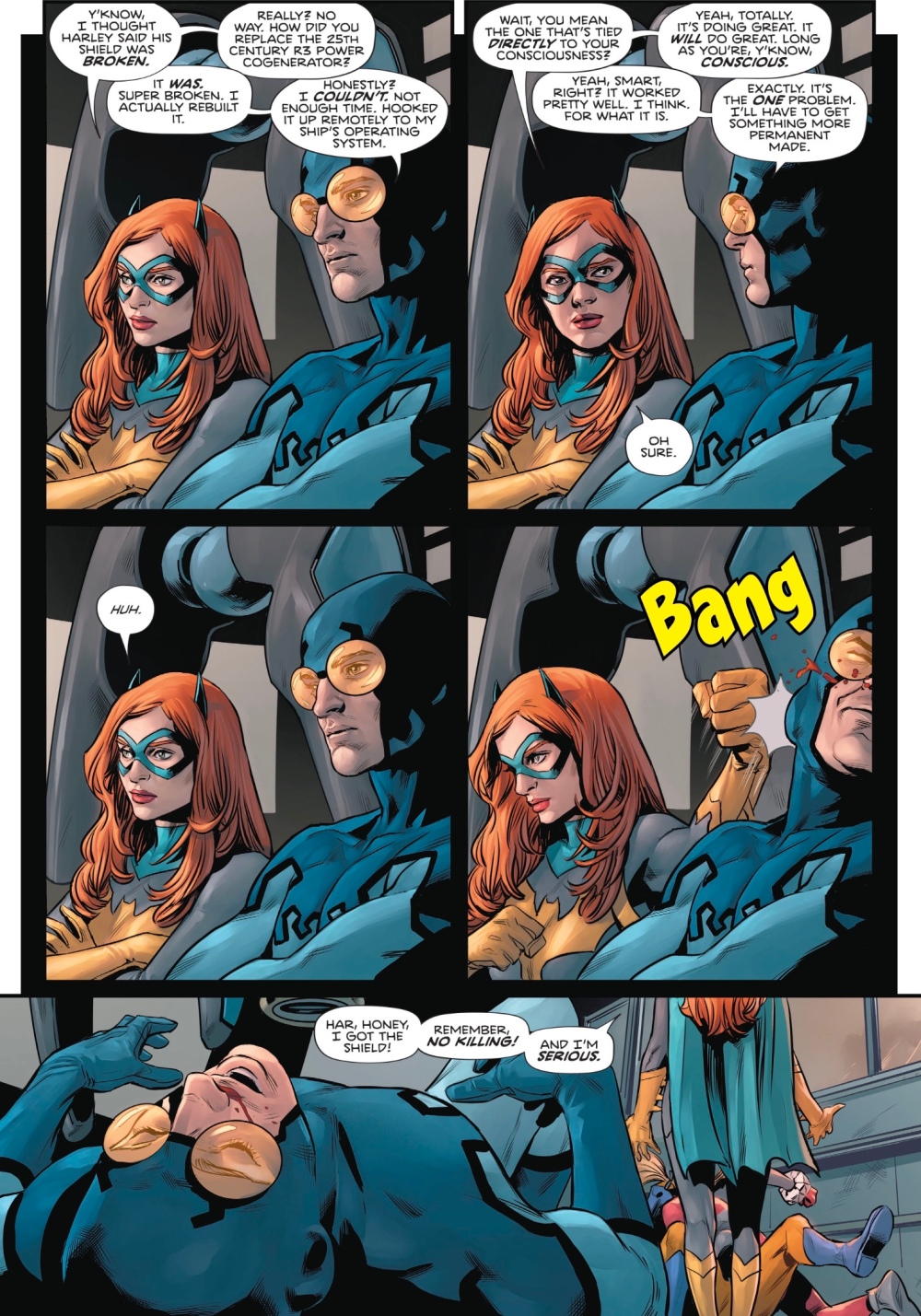 But what a mess. Like earlier chapters, but even more so, Heroes in Crisis #7 flits about in time and space, not so much layering in meaning as kicking an already spilled deck of cards across the floor. HiC is ridiculously disjointed, and while it may be a cool read for editor Jamie S Rich, the rest of us don’t have the benefit of a full-series synopsis. Here’s Wally West reminiscing on his wedding to Crisis-lost Linda. Here’s Harley Quinn trying to murder Booster Gold as Batgirl and Blue Beetle sit back and talk inanely. Here’s Batman and Flash searching for the Blue and Gold team. Here’s Wally West talking to the Sanctuary computer over three weeks.

Here’s me getting really, really impatient. Most of this issue feels like a re-run, hitting character beats we’re well familiar with while moving the overall story forward very, very little. Here’s the new stuff:

Babs, Harley, Booster and Ted finally decide to team up to find Wally, whose death, they surmise, may be mere technicality.

As for Superman? Not in the issue. The original cover, showing a dead or dying Poison Ivy, was pulled after a reader ruckus and Mitch Gerads’ alternate was presumably commissioned with undue haste.

I’m hugely sick of glacially paced nine-panel-grid scenes set in failed super-person treatment facility Sanctuary before the massacre of the first issue. In four pages of them, we get three panels that add to the story. 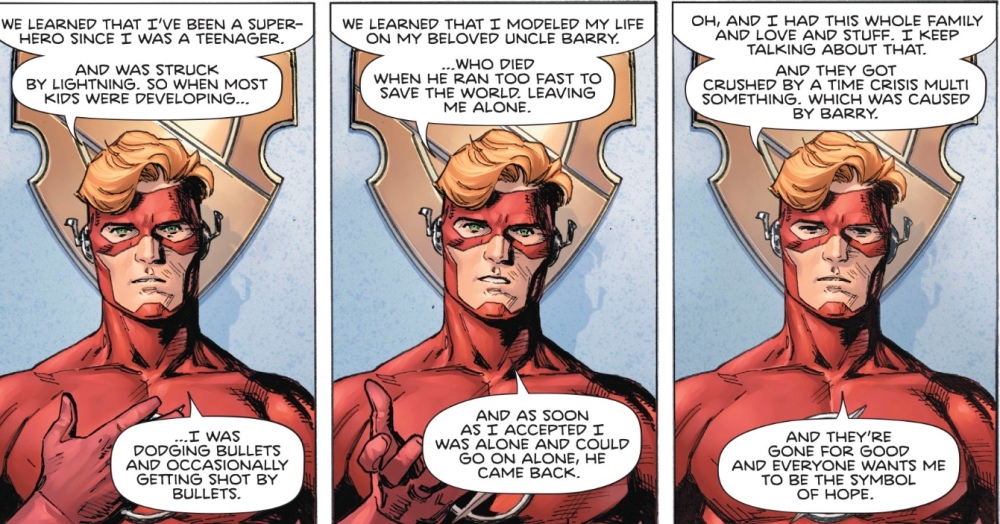 I can’t in a million years see resentment at Barry being enough to make Wally turn mass killer. Or are we meant to think PTSD – King’s stated area of interest with this maxi-series – pushed Wally over the edge? Maybe he figured that as another reality-reshaping Crisis is likely on the horizon, why not knock a few pieces off the board, see what happens?

What a rotten idea.

So anyway, Poison Ivy is back and looking a tad plant elemental. Everyone is swearing a lot and, like, talking as if they’re Shaggy Rogers. Beetle has forgotten that he’s a superhero as well as a scientist. Batgirl continues to favour child killer Harley Quinn over Booster Gold. Batgirl can somehow knock out a colleague with a momentum-free sideswipe. Booster’s brain is still missing. 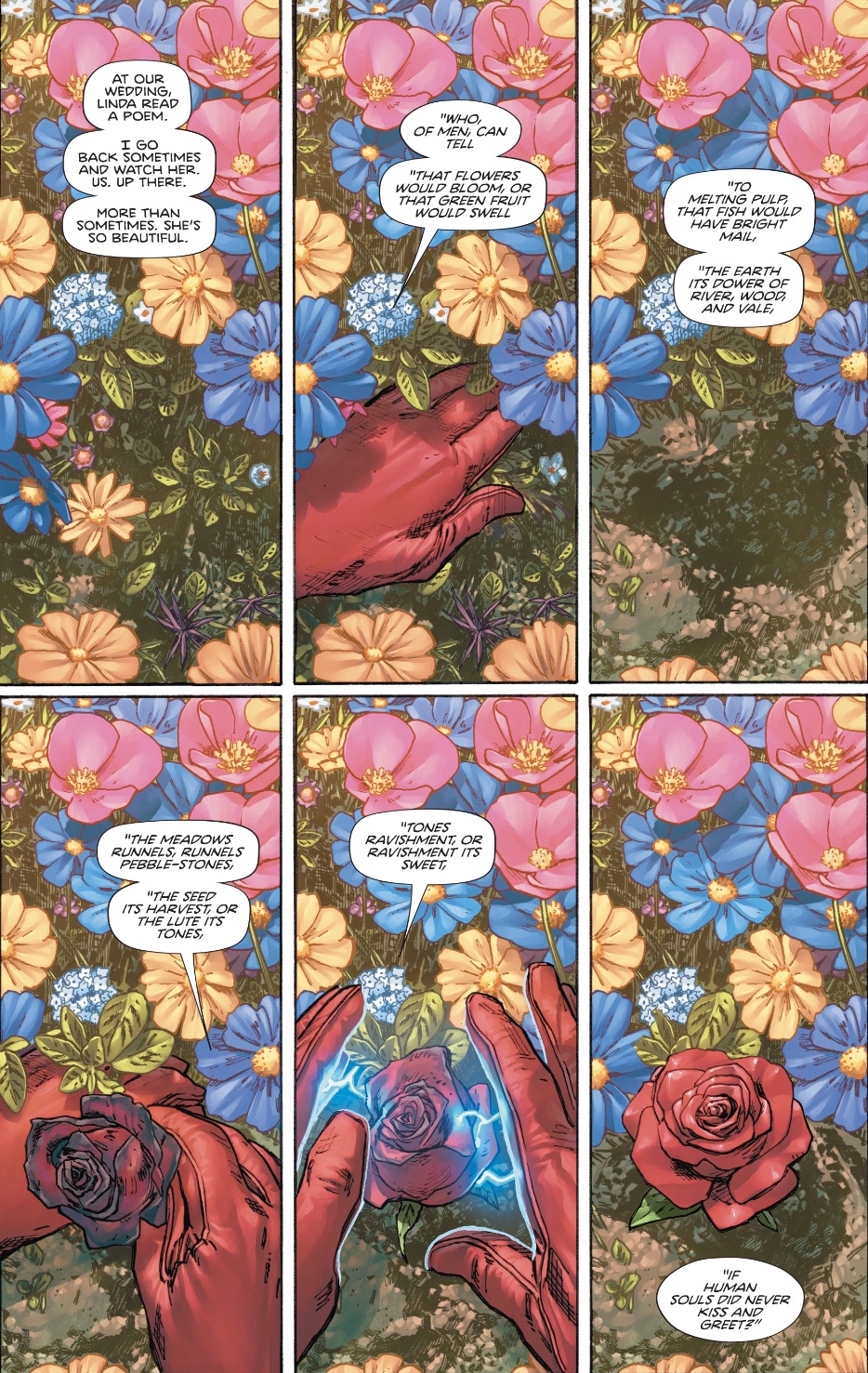 Positives. Well, the first page and opening title spread are very pretty, think Laura Ashley redesigns the DCU. I actually thought the poem was being recited by an underground Swamp Thing whose wife, remember, was also named Linda. Well, I was at the wedding of Wally West and Linda Park and don’t remember any plant poetry. It might have happened off panel, I suppose, Linda’s family being Iowa farmers and all…

The art by Clay Mann, Travis Moore and Jorge Fornes is good throughout, I especially like Fornes’ unfussy approach to Batman and Flash’s tailoring. Tomeu Morey’s colouring and Clayton Cowles’ lettering are as expert as ever.

But oh boy, this comic is a massive misstep for the Line of DC Superstars. Is anyone really enjoying it?