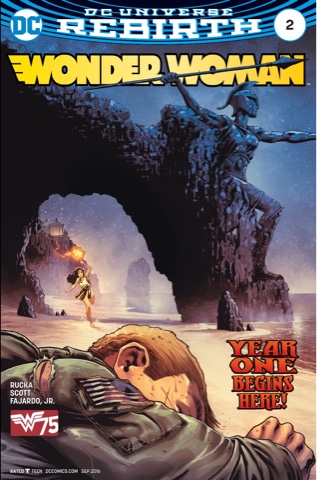 Princess Diana of the Amazons is growing up on Themyscira. Steve Trevor is undergoing rites of passage in the Air Force. Diana gets bitten by a snake. Steve is named godfather to his friends’ baby. And on the final page, Diana finds Steve amid the wreckage of a crashed plane.
So yes, the latest telling of Wonder Woman’s origin ends where others begin. Were the previous 19 pages filled with startlingly original moments, I’d be happy with that, but they aren’t. It’s a very decompressed look at what happened to Diana and Steve before the real story starts – and that’s not very much. There’s a convincing, subtle script by Greg Rucka and beautiful art by Nicola Scott (her Steve Trevor rivals Nightwing in the Calendar Guys of DC stakes), but there’s no spark.

With this series being published twice monthly, we’ll be getting the origin story in even-numbered issues, and the modern day, Liam Sharp-drawn story, in odd ones. In the Today tale, Diana is out to unravel the past she feels is a lie; in this sequence, we’re presumably seeing the truth. It’s likely the two strands will collide after a year – that’s how long Scott, I believe, is committed to the book – and things will be exciting.
But I could do with something intriguing now. We’ve only just had the Young Adult delights of Renae De Liz and Ray Dillon in The Legend of Wonder Woman, and the Marston/Peter stylings of Grant Morrison and Yanick Paquette’s Wonder Woman Earth One. Both were engaging from the first page. 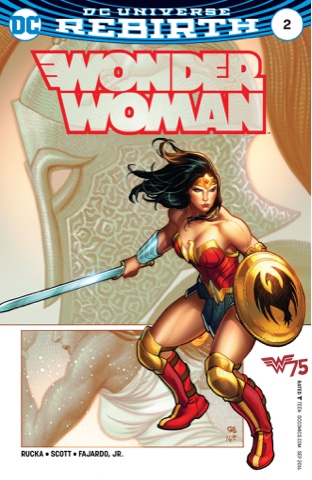 The colours by Romulo Fajardo Jr complement Scott’s art, the letters by Jodi Wynne are fine, though I find the slightly italicised font in double-bordered word balloons to denote ‘THEYRE NOT SPEAKING ENGLISH, YOU KNOW’ a bit on the migraine side. Fajardo also works with Scott on the attractive main cover, while Frank Cho provides the balloon animal variant, complete with breast-tactic inset panel. 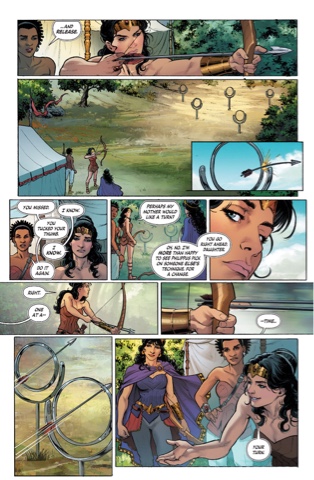 Things I like about the detail of this issue include the namechecks for old continuity Amazons Sofia and Io; a reference to the George Perez cavewomen origin; the depiction of the relationship between Diana and a pleasantly unstuffy Queen Hippolyta; and the mystery of the serpent in the garden. The parallels between Steve and Diana’s lives make sense, they don’t feel forced.
But where is the wonder? The big moment that will generate buzz? If the next-but-one issue doesn’t surprise and thrill, I may be checking out.